The following is the pre-Mass announcement I will give to the congregation of Saint Jane de Chantal Catholic Church in Abita Springs, LA for Quinquagesima Sunday and the Feast of Saint Peter Damian, a Doctor of the Catholic Church. – by Mike Church

On Quinquagesima Sunday the The Forty Hours Devotion begins.

This devotion has its origin in the 16th century when Pope Benedict XIV, seeing the excesses that were being practiced on the days of Carnival that precede Ash Wednesday called for a pious devotion to the Blessed Sacrament that included a Eucharistic Procession and constant adoration. It was extended to the entire Church in 1765 by Pope Clement XIII. This devotion was introduced in the U.S. in the 19th century. The Clutching My Rosary website contains a brief history of that process.

The obligatory visit to the church where the Forty Hours’ Devotion is held need not last a whole hour. Both the plenary indulgence and the partial indulgences (which latter may be gained as often as a visit is made) are applicable to the souls in purgatory. As regard the introduction of the Forty Hours into the United States we read in the “Manual of the Forty Hours’ Adoration” the following note:

“This devotion was first introduced into the Diocese of Philadelphia in 1853 by the saintly Bishop Neumann; next, in 1858, into the archdiocese of Baltimore; and finally at the Plenary Council of Baltimore in 1866 formally approved (confirmed by Papal indults) for all the dioceses of the United States. The Most Rev. P.F. Kenrick, Archbishop of Baltimore, feeling that not all the rules of the Clementine Instructions could be strictly observed, had petition Pius IX to grant some modifications. A rescript, dated December 10th, 1857, and extended to all the dioceses of the United States, January 24th, 1868, allowed the following concessions:

(a) That the Exposition need not be continued during the night.

(b) That the procession may be omitted at the prudent discretion of the pastor.

(c) That the faithful should be able to gain all the indulgences granted by the Constitution Graves et diuturnæ of Clement VIII.

The Mass of Exposition on the first day of the Forty Hours’ Devotion is the Solemn Votive of the Blessed Sacrament. 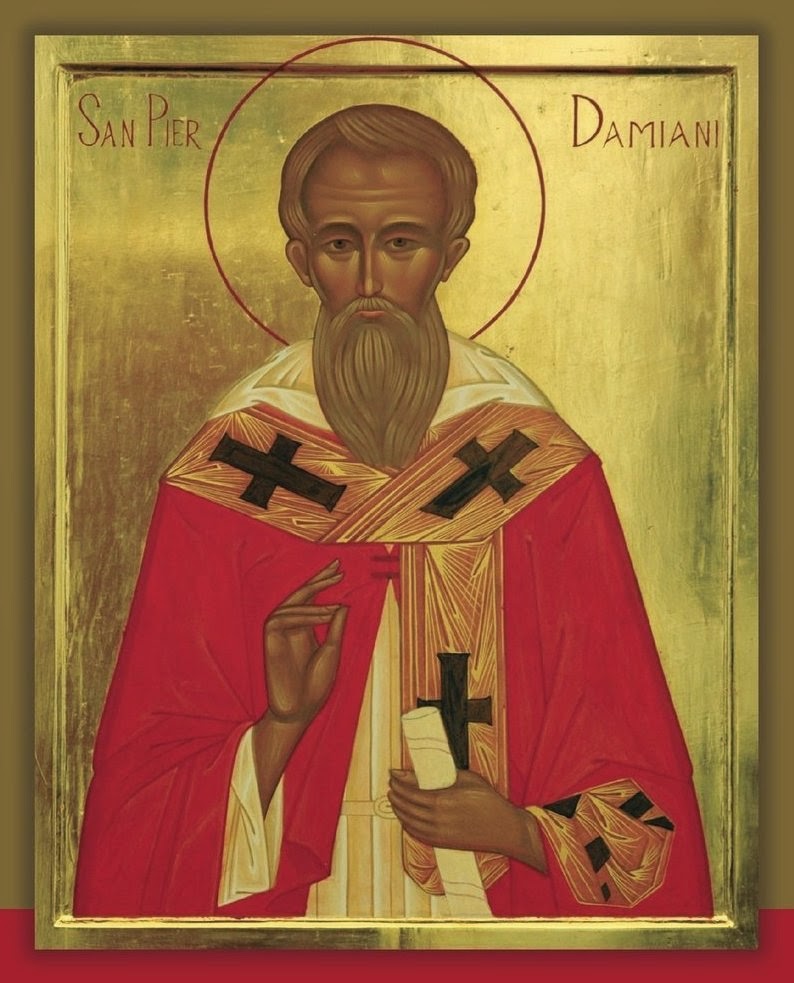 Saint Peter Damian was abandoned as an infant but was taken in by one of his brothers who had Peter educated , his education was so successful that he was made the teacher as a teen.

He fought a life-long battle against sins of the flesh and seeing a shocking number of religious who were failing in this struggle authored his famous work The Book of Gomorrah which he sent to Pope Leo IX.

He was instrumental in propagating many devout practices; among these may be mentioned fasting on Fridays in honor of the Holy Cross; the reciting the Little Office of our Lady; the keeping the Saturday as a day especially devoted to Mary; the taking the discipline in expiation of past sins.

He was a Camaldolese monk, a cardinal, and is one of the thirty-two Doctors of the Church. He was illustrious and brilliant, simple and outspoken in his denunciation of all heresies and evils.

He wrote the life of Saint Romuald, the founder of his Order and was declared a Doctor of the Church by Pope Leo XII in 1823. Saint Peter Damian died on this day in 1072.

0Shares
Previous PostChivalry Friday Episode 3, The Miraculous Story of Our Lady of The Grand Return!Next PostMonday Pile of Prep