Mandeville, LA – Exclusive Transcript – “Sales Tax: History of a Dumb Idea” by Mason Gaffney, this is part of my post.  I found this wonderful essay written by Mr. Gaffney in Insights Magazine back in 2005 about sales taxes.  He writes about the history of the sales tax.  It goes way, way back, farther than you can ever imagine.  Check out today’s audio and transcript for the rest…

Mike:  “Sales Tax: History of a Dumb Idea” by Mason Gaffney, this is part of my post.  If you missed me talking about it earlier today, this is a Project ’76 post — we’re going to get you multimedia on this as well — Patrick Henry Takes “Fairness” Internet Sales Tax Pusher To The Constitutional Woodshed.  I found this wonderful essay written by Mr. Gaffney in Insights Magazine back in 2005 about sales taxes.  He writes about the history of the sales tax.  It goes way, way back, farther than you can ever imagine.  Here’s just one passage from the essay.  He’s talking about Francois Quesnay who was an advisor to Louis the XVI.  He told Louis, [mocking] “What you ought to do is to pass the sales tax.  You should tax the people and tax where they buy the goods.”  He told Louis that a sales tax was a good idea.

Quesnay might have learned by looking back on England’s Stuart line of monarchs. Charles I lost his head in 1642 after pushing sales taxes on his subjects; James II later lost the throne for good while taking his fiscal advice from Thomas Hobbes (Leviathan) who favored more sales taxes. The Glorious Revolutionists of 1688 instead read John Locke, of whom Americans know. But then after a bit came George II and Robert Walpole (“Every man has his price”), 1721-40. Walpole survived until he tried to tax salt, which brought him down at last. Quesnay might also have looked across the Channel of his own time at George III, who lost the American colonies after imposing taxes on their sugar and tea, along with a battery of other imposts (“The Intolerable Acts” of Lord Grenville).

How easily some people forget history. Recently, a Massachusetts group invoked the Boston Tea Party to support their campaign against property taxes, which they would replace with more sales taxation. They were full of the spirit of Sam Adams Beer, perhaps, but not of the man who rebelled against British sales taxes.

Quesnay might also have looked southwest to Spain. Adam Smith asked why Spain, jump-started with gold pilfered from the New World, lagged in economic progress. He laid it on the Spanish alcabala and cientos. These were heavy sales taxes, often in cascade, that spared the grandees from taxes on their lands while stifling Spanish commerce and industry. Under Philip II with his sales taxes, Spain declared national bankruptcy three times.

In the new U.S.A. the Federalists under Hamilton took charge and began levying excise taxes. Things came to a boil in 1794 when farmers of western Pennsylvania rebelled against a tax on their corn, which they concentrated in whiskey to cut down on transportation costs. Hamilton, who had Napoleonic ambitions, led Federal troops to put down this “whisky rebellion” against his revenuers. The voters thought him either ridiculous or dangerous, and when they found him dominating the subsequent cabinet of John Adams, of which he was not even a member, and leading the country into the depression of 1798, they retired his party and installed Jefferson, whose Virginia dynasty shaped the nation for the next 36 years. (President J.Q. Adams, 1825-29, had left the Federalists in 1807, supported Madison for President, and been Monroe’s Sec. of State. Andrew Jackson, 1829-37, had allied with French Jean Lafitte to fight the redcoats at New Orleans, and led Jefferson’s old Party against the Whigs.)

These Virginians were heavily imbued with Physiocracy. Jefferson, Madison and Monroe had all represented the colonies or the U.S.A. in Paris, as had their friend Franklin, where they hobnobbed with philosophers and picked up their ideas. They were pro-French, even as France shifted from monarchy to Directory to Napoleon. It was Monroe who had led the fight for the Commerce Clause, freeing internal trade from excise taxes; Jefferson who wrote the Northwest Ordinance and bought Louisiana, and brought the Physiocrats Gallatin and DuPont into his circle, and welcomed Tom Paine back from France, and extended easy credit to small buyers of western lands; and it was Madison, with all his faults, who masterminded the Constitution, and then, in the War of 1812, used the Federal power to tax property, a power he had so carefully circumscribed. They got the new nation off to a flying start.

Jefferson Davis had to finance secession with excise taxes. The Confederate states, even though fighting to survive, stood on their states’ rights, and bucked an attempted C.S.A. property tax. So Davis put a 10% tax on all farm production, paid in kind – a crushing burden on marginal farmers. Winn Parish, LA, for example, home of Huey Long, in 1863 petitioned General Grant to save them from this “oppression.” The C.S.A. repudiated its bonds and currency, and lost the war catastrophically.

Mike:  The title of the essay, and he wrote this back in 2005, is “Sales Tax: History of a Dumb Idea.”  It’s just loaded down with the history of the sales tax.  He concludes like this:

In March, 2000, Richard Riordan, candidate for Governor of California, lost the Republican primary to Bill Simon, a weak candidate who then lost to Gray Davis. Riordan, the early favorite, made many mistakes, but one of them was retaining Michael Boskin as his economic advisor, helping alienate whatever liberal Republican support he might have garnered. Boskin of the Hoover Institution is a sales-taxer of the Bill Archer-Steve Forbes genre.

The upshot seems to be that sales taxes have been instruments of tyranny, voters do not like them, they stifle commerce and industry and their own base, and they lead to national bankruptcy. We will point up many more faults, in the next issue. Champions keep entering the field because those with an overplus of taxable property keep financing them. For most of us, though, the sales tax is a dumb idea. 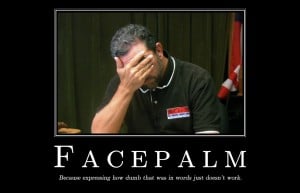