Mandeville, LA – Exclusive Transcript – Here’s a quote from Mr. Scheuer when asked about the difference in the polls and actual voting, when it comes to war and NeoCons, check out the transcript for the rest, “Mrs. Clinton, Susan Rice, and if you read Barack Obama’s speeches, are just interventionists of another sort.  The neocons are military interventionists.  Mrs. Clinton, Obama and his party are waging a cultural war against Islam.  They want to impose our way of life on Muslims.  They don’t care how many marines get killed so Mrs. Muhammed can vote.  This is very much a grassroots issue.  The next president is going to be a war president.  Until we exercise our vote in a manner that reflects our noninterventionist views, America will continue to be sucked into the vortex of wars we are going to lose.”

Mike:  Michael Scheuer from non-intervention.com, let me move onto another subject for just a moment.  The big discussion that is going on is on this overreaching policy.  “We have to have this policy. America’s got to be strong,” you hear Mr. Romney say and Mr. Ryan say.  We’ve got to shout it from the rooftops that we’re back and we’re big and we’re bad and what have you.  As you pointed out in that post last week, that is bluster, it’s not policy. A lot of damage has been done, as you also pointed out, and you just reaffirmed that, that another generation of Muslim young men who despise the United States — not us, they despise our government for what it’s done.  From your view and what you study, can we begin the process of undoing some of this?

Michael Scheuer:  Not if our assumption is that everything is carved in stone, sir. The beauty of the American political system is that for a long time, it was able not to keep making the same mistake over and over again.  Mr. Romney is surrounded by the same people who surrounded Mr. Bush.  They are arch interventionists.  There is no place they don’t want to go.  I frankly do not believe for a second Mr. Romney or Mr. Obama.  As soon as this election is over, they ear somehow going to get America involved in Syria, for example, and there will be a war with the Iranians.  We suffer from people who are vastly ignorant of our founding, of our history.  The founders did not oppose intervention because they hated foreigners.  They opposed intervention because they were afraid it would wreck the republic they were trying to build at home, and wreck it by excessive expenditures, by involvement in things we didn’t understand, by the natural consequence of restricting civil liberties that is caused by war in any instance.  We head toward our own disaster by simply not knowing our history.

Mike:  This is a major, major issue.  You said if it’s not written in stone, so let’s pretend for a moment that it’s not written in stone.  The latest Pew Research Center polls and other polls that I have been keeping up with show that the American public has turned against the neocon.  We have turned against the intervention / warfare state, maybe not fully and completely, but the trend and tide is there.  Again, how can we get about the process of trying to undo some of this?

Scheuer:  The polls, whatever they show, sir, is not reflected in the voting.  Mrs. Clinton, Susan Rice, and if you read Barack Obama’s speeches, are just interventionists of another sort.  The neocons are military interventionists.  Mrs. Clinton, Obama and his party are waging a cultural war against Islam.  They want to impose our way of life on Muslims.  They don’t care how many marines get killed so Mrs. Muhammed can vote.  This is very much a grassroots issue.  The next president is going to be a war president.  Until we exercise our vote in a manner that reflects our noninterventionist views, America will continue to be sucked into the vortex of wars we are going to lose.

Mike:  That is not a very appealing prospect.  Just a final question and observation.  The question is about the Iranians.  I’ve been going through some great pains here as of late.  I get yelled at and sent hate mail and get called a traitor and seditious and I hate my country and what have you.  We’re trying to counsel a little bit of, I don’t want to call it timidity, but humility in the face of what is actually going on with the Iranian people.  The Iranians are not Arabs; they are Persians.  They speak Farsi; they don’t speak Arabic.  The Persian people, according to Joe Klein who’s actually been to Iran, are the closest you will find to Western tendencies, the Iranian people, not their supreme religious leader and certainly not their president.  The Iranians, by and large, by all indications, are not desirous of a war with them, yet, and you pointed this out a moment ago, this seems almost like an inexorable path that we’re going down here.  This is disaster waiting to happen, isn’t it?

Scheuer:  It is, sir, yeah.  If you look at the map and look where U.S. military forces are positioned and how little the Iranians have in terms of material wherewithal, they’re fully contained.  In the Cold War sense, they’re a contained nation, but so was Saddam and we went to war there.  Attacking the Iranians, first of all, talk about things that you continue to do until you drive the plane into the mountain, airpower never defeats anybody.  We’ve proven that.  Unless there’s an atomic bomb in the belly of that aircraft, all it does is engage us in a war we won’t win and which will ultimately unite our enemies.  Yes, the Iranians are a trading nation.  The Iranians are, as you said, Persian, not Arab.  The biggest thing we have to take advantage of is that the Iranians are Shia, and they’re surrounded by a Muslim world that is 90 percent Sunni and would rather kill Shia than kill Americans.  It’s an entirely unnecessary war, but our system has been so corrupted by the Israeli supporters in the United States, who are always anxious to get Israelis killed.  When you read the polls in the Israeli newspapers, it’s 50/50 or sometimes even opposed to any war with Iran.  These big clowns, these Kristols and Wolfowitzes, it’s the American Jewish community that is a maximalist position. They want war with Iran.  Why?  Because their kids are here in the United States, because their jobs and their savings are here in the United States, and nothing that happens in a war with Iran is going to impact them.

Mike:  That’s a lot to digest.  An observation here, in your piece today at non-intervention, you mention the ensuing American defeat and how vast it is to the Mujahideen.  I had forgotten about this and I stumbled upon this about two weeks ago and meant to share it with you.  There was a James Bond movie made in the 1980s called The Living Daylights.  It was about an American arms trader who was helping the Russkis out by selling weapons to them.  James Bond and Felix at the CIA had allied with none other than Osama bin Laden and the Mujahideen.  How did it go from the Mujahideen being allies — not only being allies in real life but being allies in part of our fiction — how did the Mujahideen go from being allies to being archenemies?

Scheuer:  Well, they never liked us very much, sir.  We were engaged with the Mujahideen, the only reason was to kill Russians.  It was to bring down the Soviet Union.  Why did they turn against us?  Because after the Soviets left, the United States State Department, the British Foreign Office and the UN tried to build a government in Afghanistan that was made up of everybody except the people who fought.  In fact, one of the people they put into power was a man who was a very good man but who did no fighting.  That was Karzai’s father, the current president.  What we did was, when the CIA and the military were ready to walk away from Afghanistan, we should have done that.  The urban legend is we abandoned Afghanistan, but he truth of it is the diplomats at the UN tried to put in a government that was nominally Muslim, that was made up mostly of technocrats from outside Afghanistan who had run away instead of fought the Soviets, and they even wanted to put some communists into the government.  Why did they turn against us?  Because they fought for 13 years, had their country deliberately ruined by the Russians, and then we tried to give them another alien government.

Mike:  So this all comes down to, again, intervention in the strict sense of the word, which is Western countries saying to men in the Muslim world, “You can’t govern yourselves.”

Scheuer:  That’s right.  We’re going to tell you what a good Muslim should believe and how you should govern yourselves.  I think sometimes, sir, we forget we’ve been at this democracy business since 1215 at Runnymede.  We don’t quite have it perfect yet.  To imagine that Mr. Obama and Mrs. Clinton are going to instruct 1.3 billion Muslims about how to live their lives and to expect them to say, “Yes, good white people, we’ll do exactly what you say,” is certainly perhaps beyond the ability of at least this guy in Northern Virginia to think it’s going to happen. 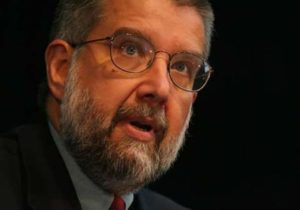