Mandeville, LA – Exclusive Transcript – Under the original ratified in 1788 Constitution, all municipal and police or common law problems and powers were left in the hands of the states.  It wasn’t until madmen decided: We can make these things federal cases.  If we don’t get our way in the state, we can get the Feds to bail us out.  Of course, there was never any constitutional authority for this.  Check out today’s transcript for the rest…

Mike:  We have an attempted email smackdown here.

Mike, I was listening to your show this morning and wanted to let you know that you made a fairly major misstatement about the implications of the recent SCOTUS DNA opinion on federalism.  The SCOTUS only interprets the U.S. Constitution.  It does not have the authority to interpret state constitutions.

Mike:  Oh, really?  They don’t weigh the supremacy clause over the state constitutions on a regular basis, sir?  Really, seriously?  Want to put some money on that?  Would you like to discuss some case law?  Would you like to wager on that?  That’s exactly what they did.  Maryland actually asked them to do it.  The Maryland statute in the Maryland Declaration of Rights clearly says that the perp who has his DNA collected, because it wasn’t collected as the result of a warrant pursuant to that crime, the state was in violation, and that’s what the lower court in Maryland said.  You live near there.  You ought to know that.  So what did Maryland do?  We’ll take it to the SCOTUS.  What the hell does the SCOTUS have to do with a DNA case and a crime perpetrated in the State of Maryland?  Absolutely nothing!  Read the damn Constitution, Matthew.  Tell me I misinterpreted something.  You misinterpreted the entire direction and intent of the discussion…

Under the original ratified in 1788 Constitution, all municipal and police or common law problems and powers were left in the hands of the states.  It wasn’t until madmen decided: We can make these things federal cases.  If we don’t get our way in the state, we can get the Feds to bail us out.  Of course, there was never any constitutional authority for this.  As a matter of fact, Matt in Delaware, if you really want to make a wager on it, I will show you a transcript from the Virginia ratifying convention where the future Chief Justice of the Supreme Court, John Marshall, said that there was no instance whatsoever that could ever occur where a state could ever be made to appear in a federal court and defend its own statutes, ever.  Yet, in 1819, there was John Marshall writing the opinion of McCulloch v. Maryland with Luther Martin representing Maryland.

If you people are going to send me constitutional smackdowns, you better come with A game, and you better be prepared to go all the way back to the source materials.  Because you think it’s cool and you think you have some knowledge, [mocking] “Well, the Supreme Court has authority over this.”  The Supreme Court violates its authority all the time.  Good grief! 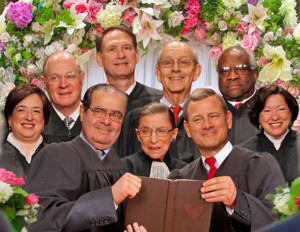