Mandeville, LA – Exclusive Transcript – “Congress faces 2016 deadline to save Social Security’s disability program.”  Now hold on just a cotton-picking moment there!  What do you mean save the Social Security’s disability program?  Where’s the trust fund?  I thought that there was a trust fund out there.  I thought this thing was solvent all the way up until 2033, we were being told just a year ago.  Check out today’s transcript for the rest…

Mike:  “Congress faces 2016 deadline to save Social Security’s disability program.”  Now hold on just a cotton-picking moment there!  What do you mean save the Social Security’s disability program?  Where’s the trust fund?  I thought that there was a trust fund out there.  I thought this thing was solvent all the way up until 2033, we were being told just a year ago.  [mocking] “Nothing’s gonna happen.  We’ve got plenty of time to fix this $210 trillion problem.”  Listen to this:

Social Security ran a cash-flow deficit of $55 billion last year and one of its two trust funds, used to pay disability benefits, will go bust in three years, forcing benefits to be cut by 20 percent unless Congress acts, the program’s trustees reported Friday.

Mike:  If it’s already spending more dough than is in the fund, then it’s already bust, isn’t it?  This is just like Congressman Ron Paul when he was in Congress used to say.  The fact that we have to borrow 43 cents on every dollar that we spend means that we already are in trouble.  There’s no pool from which to draw other funds.  There is a finite source of funds.  It comes in through the tax codes, through the imposts and duties and tariffs and what have you.  It’s about $2.6, $2.7 trillion a year.  That’s all they’re able to extricate from the American public and what little is paid by foreign companies doing business in the 50 states.  If they’re out of money, that means that they’re already bust.

Disability insurance is the smaller part of the Social Security program, with the larger portion — the pension program for the nation’s retirees — projected to be solvent for two more decades.

Mike:  It’s not solvent for three more decades.  That’s just an out and out lie.  What they mean to say is there are enough of us suckers out here that are still working and having FICA taxes confiscated from us every month to fund the projected amount of geezered citizens that are going to retire and are going to be dipping out of the net proceeds from said taxation.  There is no trust fund.  It’s gone.  That money was spent a long time ago.

But the combined programs, known as the Old-Age, Survivors and Disability Insurance (OASDI) program, are already seeing a negative cash flow, [Mike: I almost have to cry when I read this.] taking in just $731 billion in taxes and other money from general funds last year while paying out $786 billion in benefits.

Mike:  They only took in a measly $731 thousand million dollars, and they paid out $786 thousand million, or $786 billion dollars.  Mere drops in the bucket, ladies and gentlemen.  We’re not talking about any money here.  They “just” took in.  Soon it’ll be at $1 trillion.

“The trustees project that annual cost for the OASDI program will exceed non-interest income in 2013 and remain higher throughout the remainder of the long-range period,” the trustees said in their 254-page report on Social Security, which was released alongside another report on the state of Medicare’s trust funds. [Mike: I can’t wait to read that one.]

The 2016 deadline for the disability program is the most immediate problem.

Mike:  When they say the program is going to be bust in 2016 if Congress doesn’t act, what is it that Congress could act to do?  Ask yourself the question: Self, how could Congress act?  What choices do the 535 elected elite overlords have to deal with this problem?  As I see it there are two choices.  Well, there are three but number three is never going to be utilized.  So let’s just get the one that’s not going to be used out first.  They’re not going to abolish the program and say: Okay, kids, you’re on your own.  That’s not going to happen.  They could do it.  It would be prudent and frugal, I think, to do it and to grandfather out anyone that is scheduled to be inaugurated into the program, but that’s not going to happen.  We’re not going to sunset the tyranny that is, or the involuntary servitude that is the Social Security tax and program.  Of course, it’s a contribution as we’re told.

The second alternative is, if they have a deficit to make up here, they could increase the rate of taxation, which seems to me to be the most logical thing and the most probable result will be we’re going to have to have another budget agreement.  You sheeple out there are going to have to work a little harder, you lazy bums.  We’re going to have to take eight and three-quarters percent from you and eight and three-quarters percent from your employer who, by the way, doesn’t pay it.  He just assumes that’s part of what he would have paid you and instead remits it to the federal government.  Some of you think your employer is p paying it.  I beg to differ.  Your employer is not paying it.  He is only funding it.  He is only sending the actual money in.  That’s your money that he would have paid you with.  Instead, he withheld it and is pretending as though that’s his “contribution.”  Any business person that’s doing that is not going to be in business for very long, so that’s your money they’re paying the Feds with.  So instead of paying a measly 15.675 or something to that effect, they could raise the rate to 18 percent and that would make up the difference.

Or the less likely option is Congress will go: We’ve had a spike of people that are on disability and Social Security was never supposed to take the place of the Aflac duck.  Since the Aflac duck — I know this, folks, because I just saw the commercial today.  AG, have you seen the latest Aflac duck commercials where the duck is in training?

AG:  They don’t really stick with me, so I couldn’t tell you.  They all blend together eventually now.

Mike:  The Aflac duck provides disability benefits if you have paid for that service.  Most people will move heaven and earth to not use it because that’s the gamble of insurance.  You want the rate to remain as low as possible with the promise that you’re not going to abuse it by turning to insurance to bail you out every time the wind changes direction or every time there’s a hangnail.  When the government is picking up the tab, oh boy am I disabled!  I’m more disable today than I was yesterday.  Social Security was never supposed to replace the Aflac duck.

Federal Income Contributions Act, that’s what FICA stands for.  It was supposed to sock a little of your worker — [mocking] “Citizen, obey your federal overlord and sock money away” — wages, squirrel them away so you couldn’t get to them and then give them back to you when the government said you were old enough to “retire.”  It never said anything about if you break a leg on the job that you can dip into the fund, or if you throw your back out that you can dip into the fund.  That’s where the Aflac duck comes in.  The Aflac duck does sell those policies.  The options are not very good.  The more than likely outcome is a tax increase because politicians don’t have the courage to withstand the outrage of people that would have “benefits” cut.  We know where this is going.

The 2016 deadline for the disability program is the most immediate problem.

Under current law, the two programs’ trust funds cannot be mixed, meaning Congress and President Obama will have to take some steps to prevent the disability payments from being cut.

Asked about a solution, Treasury Secretary Jacob Lew demurred, saying they have some “program integrity” proposals in their budget but said it will be up to Congress to find a bipartisan solution.

Mike:  Now many people believe there will be a bipartisan solution?  How many of you believe there will be a bipartisan tax increase?  We all know it’s coming, but, like lemmings, we sit here and go, [mocking] “Well, there’s nothing we can do about it.  There’s no way we can stop it.”  You know it’s coming, either that or the whole thing goes bust.  Many of us think it’s going to go bust anyway, but those are the options that lie ahead and none of them are attractive.  What would happen, just to provide a counter narrative, what would happen if we were talking about the Aflac duck not being able to pay benefits for the moneys that have been collected from Aflac customers.  I am not aware that there is such a proposal on the table or that anyone is saying that.  Now, how is it possible then, one might ask, that the people that run the Aflac duck insurance company can manage their risks against the pool of money that they have raised to pay benefits for those who have enlisted their service?  This obviously can be done.  It is possible for this to work.  Americans can have access to a disability fund.  It can even have access to a retirement “nest egg.”  When the private sector or private companies provide it, it seems as though they are more likely than the public sources to actually frugally and effectively manage the program.

At the end of the day, we’re on the last train to Brokesville and nothing is going to stop it.  There are tax increases that have to come and they are going to come.  Imagine that $700 billion a year nut that Social Security has to raise in order to just try and pay its bills.  Just imagine that that is carved in stone and that when the interest rates on the debt go up, that that is also carved in stone.  What options does that leave the rest of the government? 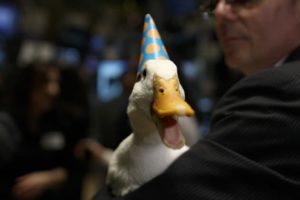 0Shares
AflacbudgetCongressdebtDeficitdisabilityemploymentFICAfree marketinsuranceMedicareretirementRon PaulSocial Securitytaxes
Previous PostSCOTUS Ruling On DNA Swabbing Opens Door To Solving Many Cases, But Is It Legal?Next PostThe Traditional Family Has Been Replaced By The State