Mandeville, LA – Exclusive Transcript – If you need any more proof, as if you needed it, that Social Security is a Ponzi scheme, and that there is no trust fund, and that the trust fund was squandered and used in real time decades ago, here you go.  It’s contained in the story.  If the immigration bill the Gang of Eight is proposing is passed, it could provide a boost, says the story.  It could provide a boost for Social Security.  Check out today’s transcript for the rest…

Social Security has long-term financial problems because, as more people retire and live longer, there will be relatively fewer workers paying into the system.

Mike:  Wait a minute, the people that are drawing Social Security, you’re supposed to have taken that money and squirreled it away.  Why do you need people paying into the system to receive “benefits” that ultimately put their own money toward said benefits?

A bipartisan immigration bill pending in the Senate would strengthen the Social Security trust fund by adding millions of workers to tax rolls, and provide a boost to the overall economy, according to an analysis Wednesday by the Social Security Administration.

Mike Church Show Audio: Were You Asked If You Wanted In Or Out of Social Security?

Mike:  In other words, the Social Security Administration is going: Dude, we don’t care what you have to do, just get us some more money so we can spend it.  There are people that need this money.  Look, you guys spent our trust fund four decades ago.  It’s gone.

The actuary’s letter suggests the immigration bill would slow this trend. Under the bill, there would be nearly 6.6 million more workers paying Social Security taxes in 2024, the actuary projects. That same year, there would be an additional 683,000 people getting benefits. That’s nearly 10 additional taxpayers for each new beneficiary.

Mike:  In other words, they have to have new people that are currently not Americans come into the United States, work, and pay Social Security or FICA withholding taxes in order to keep the Ponzi scheme going.  What happens then, 40 years from now when the people that we immigrate and force to pay the FICA tax, when they need their Social Security money or benefits that are now going to be frittered and squandered away in real time?  I suppose then you’re going to have to immigrate — as the numbers grow, won’t you be at a point where you have to import 40 million and then 60 million and then 100 million immigrants?  Where are we going to put them all?  Wouldn’t’ it be better to just end, grandfather, sunset out the stupid Social Security Administration, or should I say the counterproductive, inefficient, wildly fraudulent Social Security Administration and trust fund?  Congress spent this money and has been spending it for decades.

Mike Church Show Transcript: You Cannot Fix Government But You Can TRY and Take Its Power Away

Here’s the dirty little secret: There is no trust fund.  We have an admission then that what this is really all about has nothing to do with Grandma Getty getting her Social Security check.  Well, I suppose it does.  What it actually has to do with is there’s no money to pay grandma.  Grandma’s money was spent.  Don’t even talk about grandma’s knee replacement that Medicare has to pay for.  AG, you saw that story, you sent it to me, about how wildly different some hospitals charge for lower joint replacements if you claim Medicare.  I guess you have to claim Medicare.  Did you see that?  In Maryland, there’s no hospital that offers a knee replacement, for example, that costs more than $38,000, yet in —

AG:  There were some huge differences between California and Alaska.

AG:  Yeah, it was unbelievable to see the discrepancy that exists.  Cost of living I guess is different in states.  That makes sense to some degree but not the degree in which the difference in medical cost and what the procedures would charge Medicaid.

Mike:  Here’s the question that I will pose and no one else in broadcast television, radio, or print will ask.  Get a pen out and write this down.  Here’s the question: If the cheapest you can get a knee replacement is $38,000 — I think there was one that was a little bit less than that but let’s go with $38,000.  You get the knee replacement when you’re 70 years old, let’s say.  If there was no Medicare, would it be possible, number one, to get the surgery, and number two, would it cost $38,000 2013 American dollars?  I think not.  Just assuming then that there is some manner of an insurance policy they could purchase, how many people could possibly purchase such a service?

That brings us back, again, to original sin when it comes to leviathan screwing up the machinations of the market.  Here’s the other part of my question.  No one else will ask it, so let me be the only source.  Would the knee replacement surgery have ever been developed if the developers knew that it would ultimately cost more than anyone could ever afford to pay for it?  I believe, again, von Mises and Hayek and Rothbard, Adam Smith, laissez-faire free market economists would tell you no.  In a real free market where people actually had to pay their own way, and maybe to help pay their own way, in rare instances, you could purchase an insurance policy, which is a wager against health.  In this instance anyway, you’re betting that you’re going to be healthy or you’re not going to be healthy and therefore you buy the insurance.  Would the service be developed to start with?

Mike Church Show Transcript: Medicare is a Ponzi Scheme That Romney/Ryan Promise to Fix and Perpetuate

Think of it like this: Would the sparkplug to power the combustion engine — the sparkplug fires, the piston goes down, you’ve got a combustion engine.  What if the sparkplug — in today’s automobiles, the average cost, I think last time I saw, was $26,000 for a new car.  What if a sparkplug cost $13,000 and there were eight of them in the car?  Could you build the car for $26,000?  No.  Would anyone buy the car if it had one replaceable part that cost $13,000?  No.  Then either you wouldn’t make the car or there would be some alternative to the sparkplug.  Only the marketplace could possibly furnish this through trial and error, investment and capital, loss and profit.

AG:  I have a question about the story, though.  I know we have numerous doctors that listen to the show.  I guess the confusing part, it says, “Las Colinas, the Texas hospital that billed more than $160,000 for a joint replacement, was reimbursed, on average, $12,643. Nearby Baylor Medical Center submitted significantly lower charges but received a larger reimbursement: $14,202.”  I guess the confusion was that the difference in between what the bill and the reimbursement, was that then paid for by the person getting the procedure done or was that money that just disappeared?

Mike:  I guarantee you we have doctors listening that can answer that.  I bet you it has something to do with what physicians bill Medicare and what they actually get back as payment.  In other words, they may bill $60,000 and only get $14,000 back.  They go: We either have to pass this off to someone else, or we so wildly inflated the cost to start with.  We never intended to get $60,000.  We tried to but we only expected to get $12,000.  Even at $12,000, again, does that particular procedure, outside of people who actually have to have it for vocational reasons, such as athletes like yourself, and you’re going to live for 40 years on that replaced joint — you are Steven Austin —

Mike:  — you have firsthand experience — people are actually going to gain that kind of monetary gain and use out of the procedure.  I think if you go back to my original question, that is really the provocative one to ask.  Would any of these things have ever been developed if people were actually going to have to pay for them and there was no government subsidy to actually hide the cost?  My answer to the question is: look at the eye care industry and the answer has to be no.  It’s not only no, it’s an unequivocal no.  I don’t even think there’s room for debate in there.  It’s great to talk about this in the manner in which we are because it takes the politics out of it and just asks the questions why and how.  Then maybe if you can ask and answer that, you can get to the root cause and actually do something in the positive and affirmative about it. 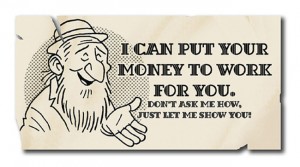