Aid To The Ukraine When We Have Cities Like Detroit

Mandeville, LA – Exclusive Transcript – “We hear oftentimes about Samuel Adams and the Sons of Liberty tossing a bunch of tea into Boston Harbor and about the horrors of the Stamp Act taxes and the horrors of the Townshend Acts and the Intolerable Acts and what have you.  It is an article of American historical faith that the unbelievable tyranny of King George III, to behold it today would scare, would frighten the modern man into cowering in the corner, fearing for his or her life, so pernicious were the Stamp Act taxes.  Tax #42 of the Stamp Act, this might actually cause a revolt in these United States today.”  Check out today’s transcript for the rest…

Mike:  We hear oftentimes about Samuel Adams and the Sons of Liberty tossing a bunch of tea into Boston Harbor and about the horrors of the Stamp Act taxes and the horrors of the Townshend Acts and the Intolerable Acts and what have you.  It is an article of American historical faith that the unbelievable tyranny of King George III, to behold it today would scare, would frighten the modern man into cowering in the corner, fearing for his or her life, so pernicious were the Stamp Act taxes.  Tax #42 of the Stamp Act, this might actually cause a revolt in these United States today.  If Congress tried to pull this one today, we might actually get something done.  #42:

And for and upon any pack of playing cards, and all dice, which shall be sold or used within the said colonies and plantations, the several stamp duties following (that is to say):

For every pack of such cards, the sum of one shilling.

And for every pair of such dice, the sum of ten shillings.

And for every paper called a pamphlet, and upon every newspaper, containing public news or occurrences, which shall be printed, dispersed, and made public, within any of the said colonies and plantations, and for and upon such advertisements as are hereinafter mentioned, the respective duties following (that is to say):

Mike:  If you do one shilling for a pack of cards or ten shillings for a pair of such dice and run the numbers, they were making gambling very expensive back in the day, but relatively speaking not expensive, especially when you consider that — you guys just had a pari-mutuel law pass in Maryland, right?  You have legal casinos now, don’t you?

Eric:  We do.  In Baltimore there’s a Caesars and something else.

Mike:  How does a casino operate?  A casino is a tax on the impoverished, because the impoverished think that by going to a casino they can take what little money they have and turn it into a lot more without actually having to do anything to do it other than get lucky, as is the case, which is not to say that wealthy people don’t gamble because they certainly do.  The wealthy person can afford that disposable income; the poor person can’t.  When the middle-class poor person heads into the casino, he’s heading for trouble.  It’s a tax.  The advantage that the house plays at is about 15 to 18 to 19 percent, depending on the game.  That is the amount of tax.  The tax on the playing cards was a one-time tax.  It wasn’t a revolving or never-ending tax for using the cards.  It was just a tax for the sale of the cards, just to make an example.

In any event, the tolerance, the American sheeple’s tolerance for tyranny and taxation, I think, today knows no bounds.  I’ll give you another example.  We’re going to talk about this one in some greater detail today.  What is this silliness now, this outfit called the National Highway Transportation and Safety Administration slapping a mandate on every automobile manufacturer known to exist in the known universe that you have to install now one of these back-up cameras on all the cars?  It’s great business for whoever it is that makes the camera lens and then makes the software and develops the software that then goes into the automobile.  Most people are going to view the NHTSA — I’m going to ask a question.

Where are your conservative Republicans on this, Tea Partiers?  Why aren’t they out there saying, [mocking] “The NHTSA can’t do that.  We didn’t give them authority to do this.  Only Congress can do that”?  To force or compel the installation of the back-up camera on the pickup truck or truck is in fact a tax.  You can’t 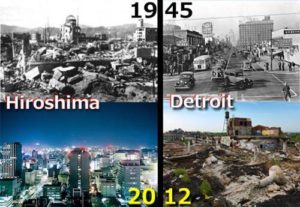 avoid it.  If you go to buy the vehicle now, it has to be installed on it.  Maybe you didn’t want a back-up camera on your vehicle.  By the imperial congress allowing the NHTSA to order the car companies, who are only too willing to do this — they’re going to say, [mocking] “It’s standard equipment.  You have to have it.”  No, I don’t.  I want to be able to go to Wal-Mart and buy a car without a back-up camera.  I want a white car that comes in a white box with black Helvetica font print on it that says “car,” wait a minute, that says “two-door car.”  No, I don’t want your stupid airbags.  No, I don’t want any of this other stuff.  No, it doesn’t have to have Bluetooth in it.  And no, I don’t want a back-up camera.  I’ll turn around and look out the window.  Maybe John Q. Public wants the back-up camera.  Fine, you pay for it.  Why do the rest of us have to pay for it?

The proper way to look at this is not as an act of tyranny.  This is another act of corporate larceny.  The automobile manufacturer is going go “Zip-a-Dee-Doo-Dah, Zip-A-Dee-Day.”  They’re going to be now able to sell you the prior upgrade, which is the back-up camera — and I’m just using the back-up camera as one instance.  I’m not going to move hell, heaven and earth or high water here and draw the point out.  I’m only trying to make the point that these things continue to happen, and this is why you’re never going to stop this.  Too many people believe that these things are done by despicable liberals who just want to do it because they’re just a bunch of commie do-gooders.  You’re missing the point.  That’s not why they do it.  They do it because they’ve been told by the business sector that they need a new way to make money without actually having to earn it, so let’s force people to buy things like health insurance, for example.

Eric:  Just drive a bunch of trucks in there? [laughing]

Eric:  Then back them up?

Mike:  That’s right.  You can skillfully —

Mike:  That’s exactly right, Eric.  We could accurately back them up because we have the mandated camera installed.  So my point is that government is now using the power, the lackadaisical attitude of the imperial congress — here, let me throw another cog into this repulsive and revolting discussion today: Ukraine.  Detroit is

in ruins.  Compton, California is in ruins.  Most parts of the inner city of the City of New Orleans, where I live, is in ruins.  Where you live, significant parts of what’s called Baltimore, Maryland is in ruins.  You would not walk your dog through there on any evening unless you were escorted by mercenaries packing bigger guns and heat than the villainous residents nearby are packing.  Significant portions of every major American urban city are in ruins.  The employment rate and the amount of people working is the lowest that it’s been since 1972.  I could go on and on and on here.

How in the hell is the United States or any of her citizens that are not in the top one percent and are not piggy-backing on the corporate tyranny or larceny that I just described to you, and making unprecedented amounts of money, how are the rest of us able to afford or even contemplate a bailout of Ukraine?  And guess what?  Your conservative Republican buddies in the United States Congress are the ones that are promoting and pushing the “Let’s Bail Ukraine Act” out.  I am revolted by this.  Not that I care about national politics anymore, because I don’t, but these people are thieves.  Most of us are having a difficult enough time paying our own damn bills.  I can’t afford to be paying somebody’s bills in Ukraine, can you?  Yet they’re going to pass this.  It’s going to breeze right through the Senate and Obama is going to sign it into law.  And the wealth transfer will then begin.  Middle-class and poor people here in the United States will be donating, will be compelled to donate millions of dollars to wealthy Ukrainians who are well connected to the government of Ukraine.  This is as sinister and as sick as it gets, yet we have Facebook polls on whether or not we approve of Obamacare or not.  Maybe there are some priorities that are just a little bit out of whack here.