Mandeville, LA – Exclusive Transcript – With the revelation of Franklin Pierce’s veto of the indigent insane bill, my perspective on fighting the federal leviathan has taken on an entirely new tint now.  I always knew there was no general welfare power granted to the Congress.  I wasn’t aware that a first generation descendent of the founder had actually had to deal with it and so forcefully and so mightily and so irrevocably demolished that idea that it wouldn’t gain a majority in the Congress for another 80 years.  That’s how powerful Pierce’s smackdown of Congress was. Check out today’s transcript for the rest…

Mike:  With the revelation of Franklin Pierce’s veto of the indigent insane bill, my perspective on fighting the federal leviathan has taken on an entirely new tint now.  I always knew there was no general welfare power granted to the Congress.  I wasn’t aware that a first generation descendent of the founder had actually had to deal with it and so forcefully and so mightily and so irrevocably demolished that idea that it wouldn’t gain a majority in the Congress for another 80 years.  That’s how powerful Pierce’s smackdown of Congress was.

As I asked the question yesterday, if President Pierce was right in 1854, what has changed since then?  Nothing has changed.   President Pierce also inspires me to say as long as I have to live under this monster known as the national government — you call it the federal government; there’s nothing federal about it — which continues to micturate upon our Constitution and use it to justify their actions, well, their actions are not justified using it, then it becomes more apparent and more clear that if Franklin Pierce was right in 1854, if James Madison was right in vetoing Henry Clay’s Bonus Bill in 1818, and if Jefferson, Madison and Taylor were correct in 1898 and 1899 about nullification and interposition, ladies and gentlemen, we may be the greatest wimpiest generation in American history.  The federal leviathan has only bluffed us and scared us into accepting all of its activities, almost all of its activities.  A full 90 to 95 percent of what it does is illegal, unconstitutional, not supported by historical precedent prior to 1910 or so, and not supported by the Constitution, not supported by anything you can find in the historical record of the founding generation when they were alive to write about it.

If Pierce was right in 1854, and I have not been able to locate anyone who said that he was not correct, although I’m sure in the Congress I could find enough to flesh out a debate or at least a conversation in Congress about his veto and why they may have thought he was wrong.  I just haven’t gotten around to doing that yet.  They did not override his veto, by the way.  His veto, the bill would have established hospitals to care for the mentally ill, Medicare for mentally ill, in other words, in 1854.  Pierce vetoed it, if you missed yesterday’s show.

If Pierce is correct and if Pierce’s reasoning — which is very eloquent, very succinct and I would say very provocative all at the same time — if and when Congress ever is granted any power over any philanthropic means, doesn’t matter what it is, whether it’s hunger, medical, shelter-related, it is irrelevant what it is.  If it is ever granted, if it ever confiscates or assumes or abrogates to itself, one of those powers, a power to legislate and then regulate in that sphere, then it must assume all power.

What that means is those that say we have to nitpick and namby-pamby our way through trying to repair the damage that has been done by making deals with [mocking] “You know we’re gonna have to keep Medicare and keep Social Security and all the other welfare state programs.  We’re just gonna have to get our kids in there off the bench to micromanage them a little bit better,” then you’re not a constitutionalist.  You, too, are micturating on the document.  You, too, are not following it.  You can’t have it both ways.

In other words, we either have to take back all of those powers or just give up on the Constitution, admit we don’t have one, and deal with the federal leviathan micromanaging all of these general welfare affairs for the rest of our known existence.  That is what I have taken away from Pierce’s message yesterday.  I hope you have gone and read the veto message I posted on the website.  It’s either all or none.  As Pierce says, if you assume one power, you have to take them all because all those powers are reserved to the states.  You can’t just take one responsibility. We have to reclaim all of them.

I think a renewed push and a renewed insistence that we don’t believe it is constitutional for the Congress of the United States, if it is to be federal, to administer any of these services.  You may not ever get the federal leviathan out of this business, but if the people become warm to the idea that their happiness and safety and prosperity is going to be better served by reclaiming those powers and discharging them themselves, then those secessions that I talked about earlier in western Maryland, northern Colorado, northern California and southern Oregon will then hopefully become more prevalent as more people warm to the idea and adopt the idea that the only way they’re ever going to be able to govern themselves, if they live on the North American continent, is to not be governed by the government of the North American continent.  I realize that sounds provocative to some, and it ought to sound provocative to some.  We’re in a provocative situation right now. 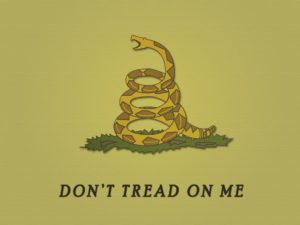