Mandeville, LA – Exclusive Transcript – Let’s carry the exercise out.  Let’s step into the King Dude’s way forward machine.  Let’s peek into the future.  Let’s say the Boehner Congress caves, as they more than likely will, and they give up on the debt ceiling, give up on the spending, give up on the Affordable Care Act.  Then you have resorted to, majorities of people in the several states have relied on the political process that their forefathers left to them to oppose and to correct abuses.  Check out today’s transcript for the rest…

Mike:  Every prediction that Henry made has come to pass, every single one of them.  Was Henry a prophet like Isaiah, Nehemiah, or is it more likely that Henry was just far more intelligent than men like Jefferson ever let on that he was and was a great student and studier and analyzer of history and human nature?  He saw that consolidating power in a central location was dangerous to public liberty.  As Henry would have defined public liberty would be a far cry from what you would define as public liberty, but he, nonetheless, saw that there was a threat posed by the Constitution.  He also thought and saw that there was something to be gained by confederating.  What he meant by confederation is that there would be a union of sorts that would be voluntary in nature and would agree for certain very important and very large tasks, there would be a union-wide effort, an energetic government as some called it, to deal with them.  Some of the problems they were facing was repayment of debts, fielding armies in case they were reinvaded by the British, fielding a navy to transport their commerce and goods to other nations on the high seas, and to having regular trade and amity between the states.

These were the actual amendments that delegates were sent to Philadelphia in May of 1787 to propose to the Articles of Confederation.  That’s specifically what they were told to go do.  Of course, they did not do that and they emerged with a constitution which, as you just heard, Patrick Henry opposing, George Mason opposed and many others did.  As a matter of fact, the ratification campaign is actually miraculous that it succeeded.  We have no indication whatsoever that there was majority opinion, certainly not three-quarter majority opinion, that the Constitution ought to have been ratified.  I just think it’s healthy to look back on that and to think and recall that the great “liberty or death” patriot, years after that speech, was still fighting for public liberty here in the United States.  In other words, nothing had been settled by the Revolutionary War and independence from Great Britain.

As Jefferson, who would be Henry’s enemy in death, as soon as Henry was dead, Jefferson could start telling people things about Henry and writing things that Henry couldn’t combat.  Jefferson did, it’s tragic but true.  Moses Coit Tyler in his book American Statesmen Patrick Henry sets the record straight on almost all these counts.  This is why I am such a fan of the book and why I digitized it, and why many of you will be owning very rare, very beautiful first edition copies, in some instances a cloth cover and in others the 1888 version, or as close as we can get to it.

In any event, the point of the discussion here is to illustrate and remind us that we’re not very much different from the men of 1776.  We’re physically different for sure and mentally not as strong, but the situations that we find ourselves in are pretty much the same.  There are always bad guys.  There are always bogies out there and boogeymen that want to steal and co-opt the public liberty for their own gain.  Why?  Because it’s easier than actually running a business or trying to make money or make your fortune or gain your power the old-fashioned way, by earning it.  I think that it is equally requisite of us to consider their actions in the face of this similar or same tyranny.

Let’s just suppose for just a moment that the government shutdown, or as I like to call it the temporary interruption of non-essential wealth transfer payments.  Let’s just say that this thing is averted or is ended and it’s ended on October the 16th with a deal that raises the debt ceiling and authorizes yet another trillion dollars of spending, or borrowing rather, the cost of which we are all going to have to eat, and that there’s also an accord reached on the implementation of the Affordable Care Act, which, again, one congress cannot bind another.  As we just learned and as elementary school children in 1828 were learning, the reason we have congressional elections every two years is to make sure that if one wicked congress does something, the next congress can undo it, which is why I still fail to understand why so many “conservatives” are in opposition to what it is the House GOP is doing.  I’m going to ask the question again.  I still don’t have an answer.  Those of you that work in conservative media, answer me, dammit!  What are they supposed to do?  What did you think the opposition and the attempt to shrink the size and the scope, as people like to call it, of the government?  What did you think it would look like?  You don’t have an answer to that either.

Let’s carry the exercise out.  Let’s step into the King Dude’s way forward machine.  Let’s peek into the future.  Let’s say the Boehner Congress caves, as they more than likely will, and they give up on the debt ceiling, give up on the spending, give up on the Affordable Care Act.  Then you have resorted to, majorities of people in the several states have relied on the political process that their forefathers left to them to oppose and to correct abuses.  Because one body of the Congress and the president were not amenable — you can flip Obama’s argument around.  Just as easily as he can make it, I can turn it on its head.  There is then opposition to the system of government, which is that the House is made to election every two years to correct these things.  Let’s just say then that you’ve had two successive elections of the House of Representin’ and after 40 attempts they have been unable to undo the damage that was done by the 112th Congress.  What is then the alternative?  That might be a good question to ask now.

I suppose my friends who work in conservative media who are all bellyaching about this being the wrong way to go about this are going to react very violently or will think to themselves that what I am about to say is but childish, kneejerk, fantastical stuff that’s never going to happen and is probably irresponsible and reckless to even propose.  Well, then, I suppose you would have said the same thing of Henry and Mason and Mason’s brother Thompson Mason and Washington.  Imagine this: George Washington, while a British subject, while a subject of his majesty King George the freaking III, shows up at this body called the Continental Congress dressed for battle in his military uniform.  Can you wrap your head around that act of defiance, ladies and gentlemen?  I can picture it for you.  Get a copy of my movie Road to Independence.  You’ll see him sitting in Independence Hall in the Continental Congress before independence is declared in his military uniform.

Just imagine this.  One of the most august, well-known citizens of the entire British Empire in North America, George Washington, citizen planter of Mount Vernon, Virginia assists in, participates in the creation of a rebel congress.  Not only does he go to the congress which is considering secession, not only does he go to the congress, but he goes and he’s dressed up in his British military uniform.  Of course, it’s British inasmuch as Virginia was a British colony and they issued the uniform.  Do you not see the magnanimity of that particular signal event?  Do we have any statesmen alive that would wear their Marine blues — let me put it in more perspective, the dress uniform of the national guard to the meeting of the 2013 edition of the new Continental Congress?  I don’t know.  I don’t know the answer to that question, maybe there are.

If the effort fails — it’s failed in two successive congresses.  If the effort fails, then what is to be the response?  Some of us think the response should be – we’re talking politics here and not fixing the anti-cult.  I still think fixing the anti-cult or working in it is more important, but let’s just deal with the politics of this for the moment.  What should the political response then be?  Does anyone have the courage and the audacity to propose a 2014 meeting in January of 2014 of the, I guess it would be the Fifth Continental Congress to be made up of delegates to be chosen in the several states by internet ballot?  Does anyone have the audacity to propose such a thing?  When you say “What would the founders do?” that’s probably what they would do.  The story of Washington appearing in the Continental Congress in a military uniform ought to tell you everything you need to know about that. 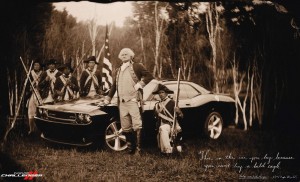