Mandeville, LA – Exclusive Transcript – When it comes to the actual Catholic faith, the Roman Catholic faith, there are some of us that believe it ought to actually be Roman Catholic.  If I wanted to go to a Protestant church, I’d go to one.  I don’t.  Of course, as I said, this is to be expected from these people.  If CNN and NBC and the rest of the media had its way, we would have a female, lesbian, atheist pope.  That’s who they’d nominate.  Check out today’s transcript for the rest…

Mike:  Glad to have you with us on the 28th of February, the last day, the last day that Pope Benedict XVI will be the Holy Father.  As a matter of fact, he’s already conducted his last public rite and will leave the Vatican at 10:45 a.m. this morning.  Then the conclave or debate over the next pope will begin.  I’m going to stick on the same subject we were just on.  If you’re on hold, don’t hang up.  I was intrigued and disappointed all at the same time to hear — of course, I expect this from the Clinton News Network and the Soledad O’Briens and Christiane Amanpours and Zoraida Sambolins still lobbying for a Latino pope.  There was a discussion this morning about [mocking] “Do you think there’s a chance there could be an American pope?  Yes, let’s have an American pope.  There are some bishops that actually could be nominated.”

Then one of the nitwits on the panel said, [mocking] “You know what young Catholics in America are pining away for.  They don’t want to sit in a church and listen to a preacher drone on with a boring homily.  They need to be excited about this.  They need to be moved and motivated.”  I’m listening to this like: Jesus is supposed to motivate you, sir.  You’re supposed to be motivated by the power of the Holy Spirit running through you.  The priest is just the earthly incarnatus, as they would say in Latin, a facsimile, a representative of Him.  It is the tradition, the canon and the liturgy of the church that is in disrepair today.  It’s not that there aren’t exciting men of faith that don the Catholic robe, that don the priest’s collar.  That’s not the issue here.

The issue is that the church, in its zeal — you can sort of understand — to modernize itself and comport with an amoral or immoral world filled with the kind of things you would expect to see from people who are not of faith, to comport with that it’s adopted some of the amoral things that are not of faith.  This is counterproductive.  Part of what Benedict was supposed to try and do — I believe he wanted to try and do — was arrest that.  The nitwits on CNN and everywhere else, they’re getting this absolutely wrong.

There are ample religions out there that you can fill the pews with exciting young preachers like the one that Tim Tebow was going to sit in the church and then speak with, Mr. Jeffress.  There are lots of preachers out there, your Joel Osteens.  That’s not what the Holy Catholic and Apostolic Church, that’s not its purpose.  Its purpose is to preserve its own canon and preserve and promote its own traditions and, as I said, its liturgy.  You don’t have to agree with that.  You can say, [mocking] “Mike, the Church’s schism back in 1014 that produced Eastern Orthodoxy is the way to go.”  Okay, fine.  I’m not going to argue with you over that.  That’s a difference of opinion twixt you and me.

When it comes to the actual Catholic faith, the Roman Catholic faith, there are some of us that believe it ought to actually be Roman Catholic.  If I wanted to go to a Protestant church, I’d go to one.  I don’t.  Of course, as I said, this is to be expected from these people.  If CNN and NBC and the rest of the media had its way, we would have a female, lesbian, atheist pope.  That’s who they’d nominate.  Or we’d have a female abortionist pope.  We’d nominate Ashley Judd to be pope.  [mocking] “Wait and see all the greatness the church is going to do now that Ashley Judd is the pope.”  I just sit and watch this and say to myself: Oh, ye of little faith.  And I mean that, little faith.  That’s my two cents on the pope’s last day today. 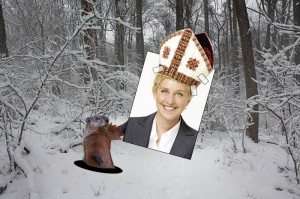 0Shares
Catholic ChurchcatholicismCNNfaithimmoraljesus christmoralitymoralspopePope BenedictreligionRoman Catholicvatican
Previous PostConservatives Need To Stop Fighting Over Details And Study HistoryNext PostThe United States Has So Many Laws, It’s Impossible Not To Break Them