Mandeville, LA – Exclusive Transcript – But this urban legend that is creeping in about what the commissioners were sent and the delegates were sent to do in Philadelphia, this has got to stop.  This is coming from some guy named Rob Natelson, who has allegedly researched this.  Apparently he hasn’t actually read any of the commission statements.  If you read the commissions, I don’t see how you can take anything else away from them other than don’t go there and do anything other than propose amendments.  Check out today’s transcript for the rest…

Mike:  Rick, you’re on the Mike Church Show.  How you doing?

Caller Rick:  I’m doing fine, Mike.  As you probably know, Mark Levin has a new book out The Liberty Amendments.

Caller Rick:  I don’t usually listen to Levin because I think he’s a gasbag, but I thought I’d listen when he was reviewing the book and talking about it.  If it gets us to an Article V, if it’ll help get the awareness out there, I’m all for it.

Caller Rick:  While he was bloviating about this, he was taking some questions.  One person had brought up that they were afraid a convention would get out of control like the original convention did in Philadelphia.  He said that was a lie, that the convention didn’t get out of control, that those people came to Philadelphia and were told by their states and people of their states to get rid of the Articles of Confederation.  Where does he get that?

Caller Rick:  I heard it exactly this way: That is a lie.  It’s been researched out that these men came to Philadelphia and they were told to get rid of the Articles of Confederation.  That’s why I don’t trust clowns like Levin to do this stuff.

Mike:  Again, I didn’t hear it, so I can only comment on what — let’s just pretend you said it rather than saying Levin said it.  That way I keep my nose clear, because I don’t want to get into an internecine struggle.

Caller Rick:  I’m not trying to drag you into this.

Mike:  Let’s just pretend like you said it.  Let me deal with that question.  Rick, do you have a copy of Spirit of ’76?

Mike:  Then you know that that’s not true.  In the first part of the extended version of Spirit of ’76, every one of the commissions is read aloud.  I’ll cue it up and play it for you.  Here’s the way it went down.  Each state sent delegates to the Federal Convention of 1787, which was to begin on the “second Monday of May next in the City of Philadelphia,” as the invitation said.  Each state with each delegate sent what was called a commission.  A commission was a letter or an act of the legislature of that state instructing the delegate on what they were to do.  Every single one of them said to revise or amend the Articles of Confederation, something about improving the exigencies of government.  They’re all pretty much the same.  Each one of them had one thing in common: revise or amend the Articles of Confederation.

Mike Church Show Transcript – A Return To Reason, God And Faith Can Cure What Ails Us

This is why on the 25th or 26th of May 1787 when Edmund Randolph announced to the convention that the Virginians had arrived with a new plan of government, called the Virginia Plan — of course it was the handiwork of James Madison — the convention went into tumult.  They had to adjourn.  There were people screaming and hollering: What are you talking about?  We’re not here to have a new plan, we’re here to propose amendments.  After they bickered and argued for about a week, they finally agreed: Okay, we’ll talk about your plan but it still needs to arrive in the form of amendments.  We have this on pretty good authority from the notes of James McHenry and Judge Yates and James Madison, among others.

We also know that the disgust and disdain of some delegates to the convention, namely Judge Yates and John Lansing of New York, was so great that in early July 1787, Lansing and Yates had had it with Madison and had had it with hearing about a new plan of government and they left.  They freaking left.  They went home.  In early August, Hamilton even leaves because he knows that Lansing and company are going to go back and tell Governor Clinton what’s up.  Hamilton does come back for the last week after Madison begs him to and ultimately signs.  That is historically inaccurate.  That’s not me speaking that.  It’s from the historical record.

Caller Rick:  Exactly.  I thought the better answer would have been the delegates there knew the thing had gotten out of control, so then when they wrote Article V, they specifically set it up so that only amendments could be proposed.

Mike:  I could talk about this for the rest of the day.  By the time they got around to Article V, there was fatigue, there was a desire for the whole thing to end, and Article V, just like Article III, is not very well thought out.  As Patrick Henry and George Mason and William Grayson and Elbridge Gerry and others would point out during ratification, Article V was constructed in such a manner that people thought it would be almost impossible, if not impossible, to amend the Constitution from outside the confines of Congress.  It’s one of the reasons Henry said we shouldn’t ratify this thing.  That’s the way it actually happened.

I’ll tell you another thing about going there to write a constitution instead of amending the Articles.  Here’s another factoid about the history of that.  When Luther Martin of Maryland gets back to Maryland with a constitution in his hand, the legislature of that state is furious at him.  They basically tried to indict him.  They made him go before, not a privy council, but they made him go before a council and explain why he had stayed there and why he had come back, instead of with amendments with a new plan of government.  The historical record on this is very, very clear.

Caller Rick:  I got most of my information from you and other sources such as yourself who have gone back to the source documents.  I wish people, when they write these things and answer this question, that they would go to the source material instead of just thinking they know it, because they don’t.  This is an important time in our history. People who are actually starting to consider an Article V Convention, we need to know what we’re doing.  The only way we’re going to know what we’re doing is by looking back in history.

Mike:  The group that Kevin Gutzman is a board member on, the Committee for America, CFA, is close to a near bulletproof resolution on Article V that you’re ever going to get.  It would limit what can be discussed and would be specific about it at every step of the process.  If you’re interested in an Article V, that’s the way to go.  There’s only going to be one amendment that’s going to be pursued with the CFA and that’s the BBA, balanced budget amendment.  I don’t think it’s going to happen.  I hope it does.  Just to have the conversation about it, I’m glad Levin came out with the book because people are talking about it.  I think that’s a positive.  But this urban legend that is creeping in about what the commissioners were sent and the delegates were sent to do in Philadelphia, this has got to stop.  This is coming from some guy named Rob Natelson, who has allegedly researched this.  Apparently he hasn’t actually read any of the commission statements.  If you read the commissions, I don’t see how you can take anything else away from them other than don’t go there and do anything other than propose amendments.  I’ve got to run, Rick.  It’s a good question.  I hope I explained it.

Caller Rick:  You did, thank you.

Mike:  It is a part of the Spirit of ’76.  I’m not just saying that to sell a couple CDs or DVDs, although I would love to.  It is part of Spirit of ’76, the audio and extended original version of the movie, which we do carry in the Founders Tradin’ Post.  Perhaps you’ve heard of that at MikeChurch.com or even Amazon.com. 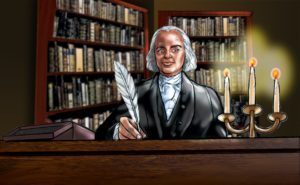