Mandeville, LA – Exclusive Transcript – It does seem as though the urgency of this must have an ulterior motive.  I can’t say for certain that that is the motive.  Certainly we know that Senators Graham and McCain and Menendez and Schumer and Feinstein and Ayotte and the rest of them view the existence of the State of Iran as an existential threat to us and the ice world of Hoth and Vulcan and LV-426 and probably the moon, too.  Check out today’s transcript for the rest…

Mike:  It does seem as though the urgency of this must have an ulterior motive.  I can’t say for certain that that is the motive.  Certainly we know that Senators Graham and McCain and Menendez and Schumer and Feinstein and Ayotte and the rest of them view the existence of the State of Iran as an existential threat to us and the ice world of Hoth and Vulcan and LV-426 and probably the moon, too.  I think your theory, in the abstract at least, is plausible.  Because we don’t know what the actual intelligence is that is behind this — let me bring Andrew in on this.  I was watching a press conference yesterday from Jay Carney’s fill-in.  It was in the White House briefing room.  He said something to the effect that the administration was going to release its intelligence findings, I thought he said yesterday.  Do you have knowledge of that?  Did they release that?

AG:  I know they had a call yesterday about 6 p.m. with congressional leaders about what intelligence they do have.  There’s been ongoing debate in terms of what is within the national security interest to release in terms of evidence that they have.   Some of the concern is, from all the reports they have communications between top Syrian officials within the Assad regime talking about moving chemical weapons to certain areas and the attacks then occurred in those areas.  That’s what they’re using as the majority of the evidence that has been released so far.  The next step is, are they able to release more of those cables between the generals and the different Syrian leaders without revealing their source as to how they received that information.  There is a little bit of: What will help convince the American public be on our side of this debate, while at the same time protecting security interests and sources abroad?

Mike:  The answer is we don’t know what the intelligence is.  I’ve been searching for this for three days.  I have a Google alert set for it as a matter of fact.  I still haven’t seen a direct link to the actual Israeli agency.  It wasn’t Mossad.  It was some other Israeli intelligence gathering agency or special force or something to that effect that alleges to have intercepted this communique and then forwarded it over to us.  From what I understand, that is the smoking gun.  If you watched the debate in the House of Commons, Miliband kept asking Cameron: Where’s your evidence?  Cameron’s henchmen in the Conservative Party were saying, [mocking] “Let me ask you a question, Mr. Miliband.  Who is it in the country of Syria that we know legally possesses chemical weapons?”  Miliband would say, [mocking] “Of course, the honorable gentleman knows that it is the legitimate government of Syria, the Assad regime, that possesses the chemical weapons.  Everyone knows this.”  Then the henchman for the Conservative Party would say, [mocking] “There is your evidence.  These aren’t things you can just sashay into a local five-and-dime and purchase off the shelves now, can you?”

Again, I think this is a pivotal point here.  Just to piece it together for you, the argument is that if a military-grade chemical weapon was used, it would had to have been used by the Assad regime because, and this is specific, because they are the only ones that possess said weapons.  They admit that they possess them.  We know that they had them, so they are the ones that must have used them.  This is assuming that it was a chemical weapon of this manner that was used.  These terrorists are very resourceful.  They had to dream up a way to try and get 250,000 pounds of plastic explosives to the top of this building that was called the World Trade Center, didn’t they?  They figured out a way to do that, didn’t they?  To say the official chemical weapon — again, if it’s not government-issued, then it can’t exist.  Really?   You really believe that, seriously?

Mike Church Show Transcript – Syria’s Assad Denies Use Of Chemical Weapons, Urges The West To Stay Out Of His Sovereign Country’s Affairs

A lot hinges on what is not known.  The fact that there is this cloak and dagger going on here, [mocking] “You can’t know our sources.”  Yeah, like if you told me who your source was, I’m going to go to the Syrian yellow pages and look up Boba Fett.  I’m going to go look up the Syrian version of Boba Fett.

AG:  The assumption when they talk about not revealing their sources in a couple of the articles, my assumption is then they have some Syrian general or Syrian top official that wants Assad overthrown and is the one passing along the information of what the regime is doing.

Mike:  Did you hear that or is that you thinking that?

Mike:  I think that’s spot on.  I think that is probably far more likely than the other scenario.  You’re saying there is a mole, a traitor to Assad.  That makes absolute sense.  Who would have access to what we know is the stockpile of chemical weapons?  The person you’re speaking of.  What incentive would he have?

AG:  I’m of the belief that Assad or one of his top officials are the ones using this chemical weapon.  My belief at the moment — and it’s making a couple jumps which I completely recognize — that the information that the Israeli intelligence got or the U.S. got I s coming from a top official within the Assad regime that wants to either be the next person in power in Syria or wants Assad out of power and is passing along these chemical weapons intercepts about where the munitions need to be moved and that sort of thing.

Mike:  Flesh your theory out a little further.  Let’s do the next step.  Let’s say for a moment that you’re correct and that there is a mole or a traitor inside the Assad regime, as they call it.  Let’s say for argument’s sake — you have your theory, your belief.  Let me counter that with a similar proposal.  Let’s just say that that individual is in encrypted contact with his American liaison.  The American liaison is telling him: Look, there’s a red line you guys have to cross and you’re not crossing it.  What if then the traitor in the midst seeks to say: Okay, let me see if I can pull this off.  He orchestrates a called-in strike using said weapon from actual Syrian stockpiles and then is successful in pulling it off.  The intercept that was gathered by the Israelis, who were tipped off that this was going to happen, which is why they were monitoring to start with, the intercept is actually legit and it’s a Syrian commander going: Who in the hell told you to drop that bomb!?

AG:  The problem I would have with that is then the U.S. is saying it’s all right to —

Mike:  This isn’t the U.S., this is the CIA.  That was going to be my next thing.  If my theory was correct, then we would have participated in the use of or in the dispersing of the weapon in order to make the case that the strike has to happen.  We’ll never know, though, will we?

Mike Church Show Transcript – Pat Buchanan Wants To Know “Who Made Obama The Wyatt Earp Of The Global Village?”

AG:  I would caution against that being the case, that our military, NSA, CIA has to be so mindful of the fact that there are leaks now and there is a paper trail of anything.  If they are going to be actively encouraging the chemical weapons use on children and Syrian rebels, that is going to come back on them.  We’ve seen Snowden release tons of information.  We know that groups like Anonymous can hack into different databases.  I find it very hard to believe the CIA would be that dumb.

AG:  But that’s now kept track of.  I wouldn’t dismiss your idea.

Mike:  I hear what you’re saying.

AG:  I think it’s a couple steps too far to think that the U.S. would encourage the gassing of Syrian children.

Mike:  When we flip it back on the other side of the Big Lebowski coin: It’s like Lenin said, man, look at the money.  Who stands to benefit from this?  Where is the benefit with —

AG:  I think that mole within Assad, he stands to benefit by exposing, if my theory is correct — with the reports that the U.S. doesn’t want to release all this information because they don’t want to give up their sources of information, I make the leap that they’ve got to have somebody within Assad’s regime that is giving them these cable intercepts.  He stands to benefit by exposing what Assad is doing, if Assad is the one ordering these chemical weapons or his top lieutenants within the government are doing that.  I do think there’s a benefit if the source is the one doing it, and is within the Syrian government, and wants to take power or take control of the country if Assad falls.  That is something to gain.

Mike:  I see the motive.  Then, again, if we’re in contact with that person and we are of the knowledge that he was the one that was complicit in the use of the weapon, my point is there is no benefit that you can possibly lay out on the table and say: Here’s where Assad’s regime and the Russians benefit from dispersing or using that weapon after the entire known universe has warned them for years on end not to do it and after the President of the United States drew his alleged red line.  There’s no line from Point A to Point B that says: I see where Assad gets something great out of that.  He doesn’t get anything great out of it.

AG:  There also were reports earlier in the week that said Assad had been incorrectly advised that the red line was not an actual, steadfast, drop dead red line that the U.S. had laid it out to be.  His advisors had incorrectly said: You can do this, don’t worry about it. 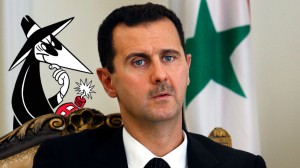