Mandeville, LA – Exclusive Transcript – I am also alarmed by these people that are running around calling themselves conservatives that are promoting the idea that for the republican Party to reclaim being a major political party and a winning national party, that they’re going to have to agree to raise tax rates on the wealthy, have to stop protecting the wealthy, do this and that and the other.  That is foolhardy to me, especially if you’re trying to play the demographic game.  Which candidate was it that was attracting, still is attracting the most amount of enthusiasm, among young people, especially intelligent young people?  Was it Obama?  Was it Romney?  Who was it?  It was Congressman Paul.  What was one of the principle things that he talked about and still talks about?  Sound money. Check out the rest in today’s transcript…

Mike:  I am also alarmed by these people that are running around calling themselves conservatives that are promoting the idea that for the republican Party to reclaim being a major political party and a winning national party, that they’re going to have to agree to raise tax rates on the wealthy, have to stop protecting the wealthy, do this and that and the other.  That is foolhardy to me, especially if you’re trying to play the demographic game.  Which candidate was it that was attracting, still is attracting the most amount of enthusiasm, among young people, especially intelligent young people?  Was it Obama?  Was it Romney?  Who was it?  It was Congressman Paul.  What was one of the principle things that he talked about and still talks about?  Sound money.

If you don’t know who Norquist is, he’s the guy who started this “no new taxes” pledge.  He’s been successful in getting Republicans to basically pledge to this.  The problem with Norquist’s plan, what people are saying anyway, is that he never addresses spending.  Norquist just assumed that the American sheeple would not allow Congress to run up tens of trillions of dollars of debt while holding a line on taxes, that one would cancel out the other, Congress would see the error of its ways, and it would do what the American sheeple purportedly do, which they don’t do, which is to balance their nooks and not spend more than they take.  The premise of the pledge, to me, is solid.  The fact that the criminal class and the corrupt class in Mordor on the Potomac did not uphold their end of their bargain is irrelevant to me as to whether or not the pledge actually has merit.  It did and it still does.

Norquist is on Meet the Half-Court Press yesterday saying: if you think the first Tea Party was animated and rabid and radical, go over the fiscal cliff and see what the second Tea Party is going to be like.  I have a question for Mr. Norquist on this, but let’s listen to the digital media file first.

David Gregory: You just said it, you want to respond more to what Grover is saying on the ultimate deal here.

Jim Cramer:  He’s talking about seducing, that the Republicans have been seduced.  He’s talking about impure thoughts. This is not a pornographic debate, Grover.  What this is about is avoiding a recession, which is going to happen.  I know you don’t want a recession.  You don’t want people laid off.  Are you going to sacrifice that on the cross of two percent?  Is that what you want?

Grover Norquist:  No, you’ve got to listen to both what the Republicans are talking about — I’m supportive of the Republican position, which is we need to have economic growth, not higher taxes.  If we grew at four percent a year instead of two percent a year, Reagan levels instead of Obama levels, for one decade, we’d net $5 trillion in additional revenue.  That would pay down the debt that Obama has run up with the Solyndra stimulus stuff.

Cramer:  Clinton did so much better with the stock market when these rates —

Maria Bartiromo:  That was a different time.  We were at the edge of the internet boom.

Norquist:  No Obamacare, no threat of regulations.  Understand how ugly the next four years are going to get.  Everything in Obamacare that Obama didn’t want you to focus on and think about, 90 percent of his trillion-dollar tax increase was pushed over until after he got himself safely reelected.  All those regulations that you’re now hearing about, those all hit after the election.  We’ve got four bad years of regulation taxes.  He wants to add higher taxes to that.  Tea Party two is going to dwarf Tea Party one if Obama pushes us off the cliff.  Let’s not pretend who’s pushing us over the cliff.

Gregory:  We’ll see who actually pushes anybody off the cliff.

Mike:  Was that Cramer that was hollering at Norquist?

AG:  That’s Cramer and then Maria Bartiromo is there as well.

Mike:  What is Jim Cramer’s pedigree?  What the hell does this guy know?  Why is he even there?  Why, because he’s at CNBC?  [mocking] “We’re gonna have a depression.”  You’re not going to have a depression that’s going to be brought on by not spending money that you don’t have.  How do people reconcile these competing thoughts in their head is what I want to know.  Let me see if I understand this.  If the government doesn’t absorb more of what is being produced by productive people, and then continue to transfer it to people that are less productive but who are in line and in favor with the government, then there will be a depression?  Really?  What if you just left the money in the hands of the people that produced it to start with?  They seemed to do a pretty good job of producing it the first time around.  Maybe if you left it in their hands, or most of it in their hands, they would continue to do a good job of producing it, and producing with it.  Yet you have these fools screaming and hollering at one another.  This is classic Red Socks v. Yankees, red v. blue, liberals v. conservatives.

To Norquist’s thing about [mocking] “If you think Tea Party one was bad, you just wait till you see Tea Party two.”  Tea Party one has happened, Grover.  We’re still staring down $20 trillion in debt in four years.  Tea Party one happened.  We still have a federal leviathan that’s going to spend more money than it spent last year.  We still have enough members of the United States Senate to make that happen.  We still have a president that will sign those bills.  This is after Tea Party one.  What exactly did the Tea Party accomplish?  It didn’t stop Obamacare from being implemented.  As a matter of fact, the only way to stop Obamacare now, or the Affordable Care Act, is for states to actually act as if they are sovereign entities again and cause what will basically amount to be a constitutional crisis.

The states are going to have to step in between the consumer or a citizen of their state and not allow the federal government to tyrannize or persecute them with the Affordable Care Act.  Here’s the rub: if they do that, if that were to happen, the same states would then have to give up much of their Medicaid, much of what they’re currently getting in debt payments, because the money doesn’t exist but comes in the form of Medicare.  Do you think states are ready to give this up?  These are serious times that need serious deliberation.  I believe that the solutions of the 18th and 19th century are the only ones that are going to work: nullification, interposition, Article V Amendment Convention, and if all that fails, secession. 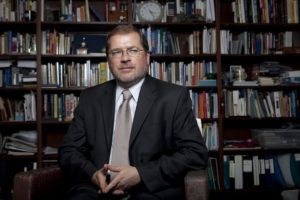