Mike:  The Tea Party is allegedly revolting against GOP stars.  That’s what the story from the AP says.

The tea party is a loosely knit web of activists, and some are hoping to rekindle the fire with 2014 primary challenges to wayward Republicans. But many more say they plan to sit out high-profile races in some important swing states next year, a move that GOP leaders fear could imperil the re-election prospects of former tea party luminaries, including the governors of Florida and Ohio.

“It changes the playing field for us,” said Tom Gaitens, former Florida director of FreedomWorks, a political action committee that has spent millions of dollars to help tea party candidates.

Mike:  That’s a really good point.  We’re not really having any big, fiery congressional town hall meetings this year.  I remember the summer of 2009.  I remember it well, and I remember those meetings, too.  I remember just how acrimonious that stuff was.  That was before Obamacare was passed….

. . . shouting down lawmakers who had voted for the bank bailout and the stimulus package. The movement’s voice grew louder after Democrats passed the health care overhaul . . .

But not long after some tea party stars took office, political analysts said, they were forced to adapt to a changing landscape, particularly in states Obama won in 2012, and to the realities of governing.

The tea party also fell out of favor with many people. At its height after the 2010 elections, a CBS News poll found that 31 percent of those surveyed considered themselves tea party supporters. A May survey found just 24 percent identified with the movement. [Mike: I could tell you why that happened, if you’d like to know.]

As a Senate candidate in 2010, he denounced as “amnesty” any plan that would offer a path to citizenship for those who were in the country illegally. Yet in recent months, he has emerged as a leader of a bipartisan Senate group that developed a plan that includes such a provision.

One sweltering July day, a half-dozen tea party protesters gathered under a tree in front of Rubio’s Miami office, seeking shade as they denounced his support for an immigration overhaul. But the protest soon turned into more of a support group, with the four men and two women grousing to each other about how Rubio had turned into a “back-stabber,” a “liar” and a “flip-flopper.”

Mike:  In other words, they found out [mocking] “Wait a minute, we were supposed to have a bunch of us that were going to show up to do this!” — “Yeah, there were gonna be 40, then it dwindled down to 20, then 14, then finally four, but we’re all really good friends.”

National tea party leaders hope to re-energize followers by focusing on two of the movement’s chief targets: the Internal Revenue Service and the health law. They said the Obama administration had handed them a recruiting tool when it delayed the law’s implementation and when the IRS singled out tea party groups and other conservative political organizations for special scrutiny. [Mike: We now know they singled out a bunch of organizations, although it seems more tea party or conservative groups than not.]

Rubio recently spoke to about 50 conservative activists and other lawmakers at a meeting of the Senate’s tea party caucus. Organizers said he breezed past immigration, instead devoting much of his speech to repealing the health law.

AG:  I think I would agree with you on that, but it will be interesting to see what happens going forward in 2014.

Mike:  Do you think that Rand Paul continues to use the tea party and tea party sobriquet in speeches as we get closer to his unavoidable candidacy for the presidency, or does he come to the conclusion that it’s a political liability and is not necessary for him to win the Republican nomination?  That’s the interesting thing, don’t you think?

AG:  Can I split the middle and say it’s a combo of both?

Mike:  Of course you can.

AG:  If you heard the Blaze news at the top of the hour, one of the stories they’ve been focusing on is that temperature meter of who’s the hottest politician.  I don’t think they mean physically at all in any way.  The idea that Chris Christie comes in at number one, Democrat and Republican, maybe that then skews Paul into saying: I can’t just take a tea party stance going into 2016; I have to split the middle and appeal to both sides of the Republican Party, if you’re going to buy the argument that there are now two sides to the Republican Party.

Mike:  Now that we know that Chris Christie is a decepticon, über-hawk interventionist, I think it’s appropriate that his nickname on this show be changed to Chris Christiani, because he’s starting to sound an awful lot like Rudy Giuliani in 2008.  Memo to Chris Christie: Giuliani was wrong then and he’s wrong now.

AG:  I think it’s something that Steele and I spent a lot of time talking about last week.  Christie’s comments, if you’re in the hawkish side of the party, you can be very, very happy with those comments.  At the same time, if you’re in the libertarian side or the noninterventionist, more restrained foreign policy, he wanted a discussion to take place.  He wasn’t like: Let’s not have Rand speak at all.  He was at least saying we can have that discussion but I disagree with you.  I don’t necessarily know if he’s all in with the Kristol / Graham / McCain wing, because they don’t even seem to want to have the conversation.  Christie at least wanted to have the conversation.  He’s going to, by all accounts, disagree with Rand on a number of foreign policy stuff, but he does at least recognize that there is a discussion to take place, which is an improvement or maturation of what you would typically associate the hawkish neocons to have.

Mike:  Well, I don’t know if it’s a maturation so much as it might be an acknowledgement of conditions on the ground.  I know you guys must have talked about — did Gingrich come out this weekend or was he already saying —

AG:  That was this weekend.

Mike:  So Michael wouldn’t have known about this.  I have a couple stories on Newt’s change of heart.  Washington Times headline “Newt Gingrich sees major Mideast mistakes, rethinks the neocon views on intervention.”  This is just Mr. Opportunist being Mr. Opportunist.  I don’t for a nanosecond believe that the Newtster has changed his point of view or has changed his philosophical argument.  Before being a decepticon was cool, this was the Speaker of the House that aided and abetted Bill Clinton in arming and engaging in war in the Balkans, an intervention that was absolutely out of our purview.  We had no business being there, none.  It was Gingrich that was chastising other noninterventionists in the House saying: You need to get behind President Clinton.  We’re going to war.  Many were saying — of course I wasn’t one of them because I was a decepticon at the time — [mocking] “Come on, there are Muslims over there and people over there that need some American exceptionalism.”  This is not something that Gingrich just all of the sudden started doing when Bush was elected.  Hell, he may have empowered Bush by his support of Clinton in Kosovo and in the Balkans.  I don’t for one second believe that Newt Gingrich has changed his philosophy.

By the bye, I have to just say something about a term that I keep hearing.  I know that you hear it as well, ladies and gentlemen.  You hear this term often.  You hear it used in a context that would make you believe or lead you to believe that one form of this is very much to be preferred over another form.  That is the term “ideology.”  [mocking] “He’s just doing this because his ideology says he must.  He’s ideological.  I’m ideologically opposed.”  Read your Russell Kirk.  Read your Edmund Burke.  Read your Alexis de Tocqueville.  You will find admonitions against ideological preferences.  I know what some of you are thinking.  [mocking] “What about theological principles, huh, Mr. Catholic?”  Ideological and theological are not the same.  The ideological bulkhead that causes some men to just reject anything that can be said by another because of a prejudice, you prejudge that person [mocking] “He’s a liberal.  He said the sky is blue.  He’s a liar.”  Dude, the sky actually is blue, even if it was Anthony Weiner that said it.  That’s doesn’t make it not true.  We may wish it was someone other than Weiner that said it, but it was Weiner that said it, just as an example.

This elevation of, it almost seems as though – and I believe this is part of a preconceived or preordained plan – the powers-that-be know that if they can convince people that they should be ideologically opposed to one another, then the status quo can march on.  There’s a little bit of give and take in the power structure.  You may be out one election cycle or two.  Then the next one you’re right back in.  The team that’s on the out has a wink-wink, nod-nod deal with the team that’s on the in going: We’re gonna scream and holler at you guys, but we’re all on the same team.  We all want to divvy up that $3.7 trillion of federal money.  Every single one of us wants our share of that.  So we’re going to pretend like we don’t want your kind of spending, then when you get in power, we’ll pretend that we don’t want your kind of spending.  What a wonderful way to run a country.  What a wonderful way to run a government that’s supposed to secure people’s liberties.  What could possibly go wrong?  What could possibly go wrong? 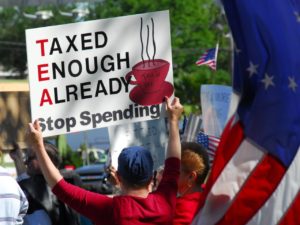