Mandeville, LA – Exclusive Transcript – “FDA approves over-the-counter sales of Plan B One-Step for all ages.”  I guess if you’re not a sexually-active and reproductively capable young girl but you sincerely want to be like one of the older girls, you can practice by going to your local Rite Aid or Walgreen’s or CVS or Dr. Smith’s Pharmacy and pick yourself up a pack of Plan B, just in case one day when you’re riding tricycles and what have you, if little Johnny gets a little frisky and you think you are now capable, let’s give it a go.  Check out today’s transcript for the rest…

Mike:  “FDA approves over-the-counter sales of Plan B One-Step for all ages.”  I guess if you’re not a sexually-active and reproductively capable young girl but you sincerely want to be like one of the older girls, you can practice by going to your local Rite Aid or Walgreen’s or CVS or Dr. Smith’s Pharmacy and pick yourself up a pack of Plan B, just in case one day when you’re riding tricycles and what have you, if little Johnny gets a little frisky and you think you are now capable, let’s give it a go.  Nothing to fear here.  Nothing to see here.  I’ve got protection.  We all now have protection.  How many young men are going to be out there that are now going to flock to pharmacies – it doesn’t say that it has to be gender-specific.  In other words, it doesn’t say that only young girls can buy this over the counter.  It says it’s available over the counter for all ages.

Do you realize that you can’t go buy a pack of Sudafed?  If I have a sinus infection or I’m suffering hay fever or pollen fever or fits of sneezing and respiratory agitation and I want to treat it with Sudafed or ephedrine or what’s the active ingredient in Sudafed?  I think it is ephedrine.

AG:  Is that what makes meth also?

Mike:  Yes.  Well, you can make meth out of it.  If you want to go buy that, you have to have a driver’s license, you must be over 18 years of age, and you have to sign your life away.  Sign here that you’re not going to go make crack with that, you’re not going to go make methamphetamine with that Sudafed.  Will the young people that purchase the Plan B pill, will they be made to sign a waiver saying they’re not going to go off and make babies with the Plan B pill.  You can’t use the Sudafed pill to go make illicit drugs that the DEA and FDA have claimed are not for human consumption because they’re bad for you.  I can’t think of anything that’s worse for anyone than killing something.  That’s what the Plan B pill does.  According to the story at CBS News:

The FDA announced on Thursday that it would allow all women with child-bearing potential . . .

Mike:  I’ve got to ask the question: Ladies, how is a pharmacist going to determine whether or not you are a woman of child-bearing potential?  I don’t want to speculate, especially in a demonstrative manner that might have me describing certain features of the female form.  Other than that, would this not require then male pharmacists to “check out” young ladies that want to buy the Plan B pill?  Just who are you to only allow females to purchase this…

. . . it would allow all women with child-bearing potential to purchase the emergency contraceptive over-the-counter without any age or point-of-sale barriers.

Plan B-One Step (levonorgestrel) [Mike: Let’s just call it baby killer for short.] is a form of the “morning-after pill,” a type of emergency contraception that drastically reduces the chance of pregnancy after a woman has engaged in unprotected sex. [Mike: It says here after a woman has engaged. Does it work after a 12-year-old woman has engaged? Just curious.] There are currently three types of morning-after pills for sale in the U.S.: Plan B One-Step, Plan B, and ella. Plan B is currently available for women 17 and older over the counter, and requires a prescription for those under the age limit. Ella requires a prescription regardless of age. [Mike: That must be baby killer stuff on steroids.]

Plan B One-Step works best when it is taken within three days after sexual intercourse. It will not stop a pregnancy if a woman is already pregnant, and no evidence shows that it will harm a fetus that already exists.

“Over-the-counter access to emergency contraceptive products has the potential to further decrease the rate of unintended pregnancies in the United States,” said Dr. Janet Woodcock, director of the FDA’s Center for Drug Evaluation and Research, said in a press release.

The new approval was years in the making.

“As the father of two daughters, I think it is important for us to make sure that we apply some common sense to various rules when it comes to over-the-counter medicine,” Obama said previously.

On April 5, 2013 U.S. District Judge Edward Korman ruled that emergency contraception should be available to women of all ages . . .

Mike:  We allegedly live in a federal republic (we don’t).  We allegedly have control over our municipalities and over our local ordinances and laws (we don’t).  We allegedly have state identities within all of the 50 states (we used to, we don’t).  We know this now because our almighty federal overlords in the FDA and in the Obama administration and in the Bush administration before that and Clinton before them, all the way back to the first Roosevelt have determined that you people out there in the hinterlands aren’t smart enough to govern yourselves.  You have to have guidance from your elite Harvard and Yale graduated superiors on the East Coast that either reside in a federal court building somewhere in New York, Philadelphia or in DC, or in the granddaddy of them all federal court buildings, the Supreme Court of the United States.  Again, we have judges acting as legislators and passing laws that purports to rule over 311 million people.  Fantastic.  What can possibly go wrong?

Just think back on this, folks.  Those that warned back in the late ‘80s and early ‘90s when the sex ed bug bit and people were demonized and vilified into going along with that when nurses and other faux medical practitioners wanted to work their way inside your schools and wanted to instruct your children on how and what a condom was, what it was to be used for, maybe demonstrate it on a carrot or cucumber or whatever the case may have been.  You were warned that this would open the door and that this would lead to increases in teenage pregnancies.  The statistics say that is exactly what has occurred.  Here’s a more disturbing statistic.  The more disturbing statistic is that not only did it lead to more teenage pregnancies, it has now led to more single, non-married women bearing children.  Those numbers are undeniable.  Now we have Plan B. 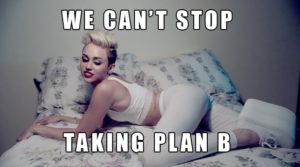