Mandeville, LA – Exclusive Transcript – I thought we had a justice system in this country.  I thought you were innocent until you were proven guilty.  This is just another one of these outgrowths of this maniacal, I think, it has become a psychosis of sorts, of this my country right or wrong.  Really?  Your country right or wrong?  Your country before the philosophical or foundational tenets of why you have a country to start with?  It seems to me, as I recall, that there have been revolts against acts of tyranny like we’re seeing from the NSA.  Check out today’s transcript for the rest…

Mike:  I was mentioning the interview yesterday.  Can we cue up Bruce Fein and the senior Mr. Snowden on with George Stephanopoulos yesterday on This Week?  Edward Snowden’s father is going to be asked questions about his son, about his return to the United States, about his asylum in Russia and much, much more.  I have Glenn Greenwald’s piece here.  Wait till you hear what the founder of Lavabit, the country that shut itself down rather than sacrifice the private and encrypted communications of its 400,000 subscribers.  You want to talk about, what do we hear this termed all the time?  [mocking] “You need to be a good corporate citizen.  You need to give back to the community.  You need to conduct your affairs in a proper manner.”  Then when some company like Lavabit does it, all I hear is crickets chirping out there today.  First, here is Fein and Snowden on with Stephanopoulos yesterday:

George Stephanopoulos: You just heard there some U.S. officials, according to Martha Raddatz, believe that a deal may be in the United States’ interest. Do you think that’s something your son is open to?

Lon Snowden: I can tell you that I’m not open it. And that’s what I’ll share with my son in terms of a plea deal at this point —

Stephanopoulos: You’re not open to it?

Snowden: Not open to it. At this point, what I would like is for this to be vetted in open court for the American people to have all of the facts. What I have seen is much political theater. I was disappointed in the president’s press conference. I believe that’s driven by his clear understanding that the American people are absolutely unhappy with what they’ve learned and that more is going to be forthcoming. So again –

Stephanopoulos: What disappointed you in particular?

Snowden: — I believe much of what he suggested is superficial. We can go over that point by point if you would like, but a deal — the only deal will be true justice. You know, justice should be the goal of our government and is also the goal of a civil society.

Bruce Fein: Those are the words of James Madison. I could make these points, George. Number one, we now have a date for visiting Moscow.

Fein: We have visas, we have a date, which we won’t disclose right now because of the frenzy.

Fein: Very soon. And we intend to visit with Edward and suggest criminal defense attorneys who have got experience in Espionage Act prosecutions. There have only been ten in over 100 years. We think, also, it’s especially important to go back to what President Obama said about Edward not being a patriot. It was the voice of the American revolution, Thomas Paine, who defined a patriot as someone who saves his country from his government. And we also heard about the alleged disasters that would ensue to the United States because of what Edward has done. Let’s go back to the Bradley Manning case, when it came to the damage phase, the United States conceded not one person has been injured and impaired because of what Bradley Manning disclosed.

Mike Church Show Transcript – Does Anyone Really Care That The NSA Is Spying On Absolutely Everyone?

Stephanopoulos: What was your reaction when you heard the president say your son is not a patriot?

Snowden: I would say — again, I think he was put in a tough spot. There were many questions that should have been asked at that press conference that were not. I would have liked to see them ask about the DEA special operation division, many other things — his treatment of whistle-blowers. But in terms of him characterizing my son as a patriot, or others like Peter King who characterized him as a traitor, what I would say is that my son has spoken the truth. He has sacrificed more than either the president of the United States or Peter King have ever in their political careers or their American lives. So how they choose to characterize him really doesn’t really carry much weight with me.

Stephanopoulos: You say you’re not open to a deal, but you are — it does sound like you’re going to encourage your son to come here back and face trial?

Fein: I think, George, I can add — because I wrote a letter with Lon to the attorney general of the United States saying we would like to discuss conditions that would make it permissible.

Stephanopoulos: Right. You said no pre-trial detention, no gag order, and he would choose the venue.

Fein: No, no, no, a venue that was impartial, because of the history of the Eastern District of Virginia being a graveyard for defendants. But, those, George, were not stated as ultimatums. They were subjects for discussion, with non-circumvention clauses in there. Just because we understand, we can’t dictate what the Department of Justice does.

Stephanopoulos: And as a father, you want your son to come home.

Snowden: As a father, I want my son to come home if I believe that the justice system that we should be afforded as Americans is going to be applied correctly. At this point, when you consider many of the statements made by our leaders, leaders in congress, they are absolutely irresponsible and inconsistent with our system of justice. They have poisoned the well, so to speak, in terms of a potential jury pool. Where my son chooses to live the rest of his life is going to be his decision. What I would like at some point in time for him to be able to come back to the U.S., whether he’s going to live the rest of his life here or not, and face this, because I believe that the truth will shine through. It’s clear that the American people, regardless of what laws have been passed by congress —

Stephanopoulos: I was going to say, it does appear that he broke the law.

Fein: No. George, that’s simply irresponsible to suggest before a trial someone has broken the law. It may well be that what he disclosed is protected by the First Amendment. The president himself has already conceded there’s something irregular about the way the NSA —

Stephanopoulos: Although, the president pointed out that he had other avenues open to him —

Fein: Yes. Let’s go that. And what he said was, oh, Mr. Snowden should have gone to the congressional oversight committees. The congressional oversight committees have already gone on record, Dianne Feinstein, he’s guilty of treason. These were the committees that knew for seven years what was going on and refused to disclose it to the American people. The best was some cryptic statements. If the American knew what was going on, they would be stunned. And Edward Snowden is supposed to go to them? That seems rather implausible, because they were the ones who were responsible for the secrecy.

Snowden: I want to add to this. I want to add is in terms of — the president made the statement that the president had enacted whistleblower laws that protected contractors like my son Edward, that is absolutely untrue. Either the president is being misled by his advisers or he is intentionally misleading the American people…

Stephanopoulos: You don’t think he would have been protected by the whistleblower status?

Snowden: Absolutely not. And maybe at some point, we should go through that in the media, of just hypothetically, let’s imagine that Edward Snowden said, wow, there’s a problem — let’s say he got on an airline in Honolulu and he chose to fly to Washington, D.C., lands at Dulles and he actually gets an audience with, oh, let’s say, Peter King or Dianne Feinstein, how do we think that he would have been received if he had a private audience with them? We have seen how they’ve reacted. Even when the truth comes out, they spin the truth; they try to hide it from the American people. He would have been buried under the capital. And we would have never known the truth.

Mike:  I love the James Madison quote.  I love the Thomas Paine reference.  That is correct, you can Google that.  As a matter of fact, I’ll do it for you.  I’ll make a Project ’76 webisode out of it.  There are two other points in there about whether or not he’s a patriot and then saying that Edward Snowden has actually sacrificed more than Barack Obama or Peter King ever have as they grandstand and glad hand with their political audiences is some profound and meaningful stuff there.  People don’t like Congress.  They’re suspicious of it and they have damn good reason to be suspicious of it.  When you point out: Look, you’re calling this individual a gentleman, as Bruce Fein points out: Wait, we’re way premature before you start talking about having committed crimes and what have you.  I thought we had a justice system in this country.  I thought you were innocent until you were proven guilty.  This is just another one of these outgrowths of this maniacal, I think, it has become a psychosis of sorts, of this my country right or wrong.  Really?  Your country right or wrong?  Your country before the philosophical or foundational tenets of why you have a country to start with?  It seems to me, as I recall, that there have been revolts against acts of tyranny like we’re seeing from the NSA.  I haven’t even gotten into what they’ve done lately.  Great interview.  Good stuff there. 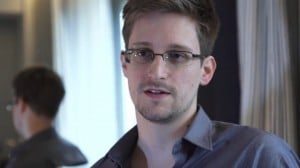