Mandeville, LA – Exclusive Transcript – Is there anyone out there listening right now that had the distinct pleasure, and it was a pleasure, of watching the debate yesterday in the House of Commons over David Cameron and the Conservative Party’s bill to authorize military action against the Assad regime in Syria?  How many of you got to see or listen to his?  There’s an app you can get for your phone for CSPAN2.  How many of you got to see this or watch it?  I watched about three hours of this.  It was just fascinating, absolutely fascinating.  Check out today’s transcript for the rest…

Mike:  Is there anyone out there listening right now that had the distinct pleasure, and it was a pleasure, of watching the debate yesterday in the House of Commons over David Cameron and the Conservative Party’s bill to authorize military action against the Assad regime in Syria?  How many of you got to see or listen to his?  There’s an app you can get for your phone for CSPAN2.  How many of you got to see this or watch it?  I watched about three hours of this.  It was just fascinating, absolutely fascinating.  The upshot of it is, if you haven’t heard, the Brits got to a vote.  Prime Minister Cameron, some people say he is the counterpart of the American president.  He really isn’t.  To me, since our presidents act like kings, even though they have to go through this thing called an election, I would more compare President Obama and Bush and Clinton before him, I would compare them to the Queen of England or Prince Charles, on other words the monarchy.  I would more compare them to monarchy than I would say David Cameron.  To me the prime minister is more like the senate majority leader or the speaker of the house.

In any event, he is the floor leader of the British government.  I would assume he has the blessing of the magistrate, which would be Queen Elizabeth.  There were two ways this could have happened.  Cameron could have just authorized this and made the same fake claim that Obama’s trying to make, [mocking] “This is national defense.  We have to act in haste.  We’ve got to protect our interests.  If we don’t protect our interests, we’re in big trouble.  The interests of the United Kingdom are at stake here.”  He could have done that, but instead he was convinced that if he took the vote to the House of Commons, he would win and have the authorization.

If you think public opinion is running against the Syrian madness and against the madness of King Barry I, if you think public opinion in this country is running against Syrian intervention, it is even stronger in the UK.  The Brits feel like they were really duped.  The Brits said: We did provide some of that intelligence back in Iraq in 2003, but most of it was you, Powell.  Most of it was President Bush, Paul Wolfowitz, Dick Cheney and the gang.  Most of it was them.  [mocking] “We went on the good authority of our allies, the United States of America.  It was they who led us into this disastrous war in Iraq, even though at the outset of the hostilities we thought we had the upper hand and we were doing the good work of the British Empire that needed to be done.”  We all know what happened there.  The Brits blame us and blame our rush to war and our faulty intelligence on our Yank attitude, basically.

There is a natural reticence now that is built into the British — this is another casualty here of permanent war.  For those of you that are such great fans of this stuff, such great fans of war, always like to boast and brag and run around and talk with the rest of your decepticon buddies about the wonder that is our British allies, [mocking] “The British are always with us.  The British and Australians, they’re always there with us.”  Well, they were but they’re not anymore.  Congratulations, Senator McCain.  Congratulations, Senator Graham.  Congratulations, Speaker Hastert.  Congratulations all you decepticons.  You have now pissed off half of the known universe.  The rest of our “allies” are going: We’re not buying your latest campaign.  Some of you are thinking right now, [mocking] “It’s just Obama.  They don’t want to be in cahoots with Obama.”  I don’t think this vote would have been as close if it were not for Obama.  The British do not want to be seen as the big bully country on the block that will not do things because they’re dealing with the leader of another country who’s a minority.  That is just classless, tasteless.  If anything, Obama is an asset in this, regardless of his performance.

I watched this debate, folks.  If you think John McCain and Lindsey Graham and Kelly Ayotte and Dianne Feinstein and Robert Menendez — cue up Senator Menendez for me.  If you think that our warlords and war drum beaters are committed and rabid and mongers, you should hear the Brits on this.  Ed Miliband, the leader of the Labour Party, was supposed to be a yes vote.  Apparently what the British think is that this Miliband guy, he duped David Cameron and the rest of the highfaluting and esteemed members of the House of Commons, that he duped them into thinking he was one of them and was going to go along with the vote.  I have some of the details from the British opinion writers.

Miliband was the sole voice of reason in the room.  Once he started talking, it reminded me of watching a modern-day, English version of Patrick Henry.  Those that were not in favor or Miliband’s point of view started to come around.  He was so relentless in his promotion of the possibility that the intelligence is wrong.  Even if it was right, let’s just say the Israelis are correct and they actually did intercept a message from one of Assad’s commanders and it was Assad that gave the order to blow the chemical weapon device up, Miliband was saying, [mocking] “Even if you’re correct, you still have not made a compelling case.  Where is the a compelling national security interest for the peoples of Great Britain and the peoples of this chamber?  Mr. Prime Minster, I’m happy to hear your presentation.”  I actually have Miliband cued up.  I recorded the whole thing, all seven hours of it.  I have Miliband cued up on one my TiVo.

The case that was being made by the proponents of this — if you’re familiar with domino theory, this will make a lot of sense.  The case that was being made was a case that requires several dominos.  It goes something like this, [mocking] “If we allow the Assad regime to get away with this without a stern military response, then other bad actors in the regions will think that they too can get away with this sort of butchery and savagery in attacking their own peoples.  As it spreads throughout the region, commerce and other interests of the British Empire will then become endangered by the spread of these chemical weapons and weapons of mass destruction being used all throughout the region.  Indeed, even British citizens will then be imperiled by their use as we refuse to act and protect our own.”

The counterpoint to that is there have been many, many documented uses of the kind of weapons you cite.  There have been hundreds if not thousands of recorded atrocities that have happened at the hands of Muslim extremist terrorists.  To say that the use of the chemical weapons is the greatest slight and insult to all of Middle Eastern humanity is to say that you haven’t been paying very close attention to what has been going on in the area of the world we call the Middle East.  There have been massacres of all sorts.  I pointed out yesterday, what about the massacres that were going on in the Sudan?  What about the massacre that happened in that hotel in Indonesia about six or seven years ago?  If we sat down and researched it, we could come up with a Muslim massacre of the month.  Hell, you can make a calendar out of it.

That was the point that Miliband was trying to make.  [mocking] “Mr. Prime Minister, these events happen all the time.  They may not happen with chemical weapons, but they happen all the time.  Do you really mean to imply that the British Empire can actually stop this madness?”  I think that was a point that actually is the point that held the day.  That’s the point that Boehner and company, if they’re going to stop Obama, need to make.  Pat Buchanan has a column today asking the question whether or not President Obama is going to be stopped by Speaker Boehner. 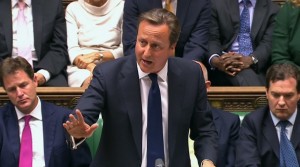