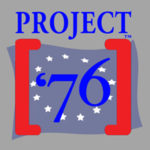 Mandeville, LA  – By Mike Church- Reading this marvelous letter from Edmund Pendleton is almost like reading the blogs of modern day “republicans”. That our Founders saw the dangers inherent in the general government formed under the Constitution will come as a shock to many who have been taught the mythology that all was well in the young United States thanks to the fabled document. Pendleton’s theme is one that is as relevant today as it was after the Adams Administration: the government can be only as pure and respectful of liberty as the constituent parts – the politicians – are imbued with virtue, the constitution notwithstanding.

Listen to the Preview of “Danger Not Yet Over”-Subscribe to Mike’s “Founders Pass” and gain access to ALL Project ’76 content and much more. Take the Tour

Therefore changing the politicians in a corrupt system without changing the systems corrupting mechanisms is a Sysyphus like endeavor doomed to repetitive outpourings of much fervor and passion and with much heartbreak. Perhaps we can channel this great statesman of the Old Dominion and apply his suggestions to our modern crises. However, without an expressed and lengthy discussion of the virtues that make liberty and [r]epublicanism possible while guarding against State corruption, as Pendleton (and John Taylor of Caroline as well) warn, these efforts have little chance for success. – Mike Church

“The Danger Not Over”
By Edmund Pendleton

5 October, 1801 – This proposition does not argue a want of proper confidence in our present [President], but the contrary. It can be no censure to believe that he has a nobler destiny to [sic]fulfil, than that of making his contemporary countrymen happy for a few years, and that the rare event of such a character at the head of a nation imposes on Us the sacred duty of seizing the propitious opportunity to do all in our power to perpetuate that happiness. As to that species of confidence which would extinguish free inquiry and popular watchfulness, it is never desired by patriotism nor ought to be yielded by freemen.

In pursuit of our purpose, we ought to keep in mind certain principles which are believed to be sound; to enquire whether they have been violated under the Constitution; and then consider how a repetition of those violations may be prevented.

See Edmund Pendleton debate the raitification of the Constitution in “The Spirit of 76” on DVD, available here.

Pendleton then goes on to list six virtues a limited government of free men should be based on (italics = emphasis mine). 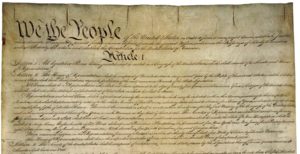 1. Government is instituted for the good of the community and not to gratify avarice or ambition; therefore, unnecessary increase of debt appointment of useless officers (in Obama’s case, czars) …and engaging us in a war abroad for the sake of advancing party projects at home, are abuses in government.

2. The chief good derivable from government is civil liberty; and if government is so constructed as to enable its administration to assail that liberty with the several weapons heretofore most fatal to it, the structure is defective. If our government can, with ease and impunity, array those forces against social liberty, the Constitution is defective.

3. Peace is undoubtedly that state which proposes to society the best chance for the continuance of freedom and happiness but if, by indirect means, the executive can involve us in war not declared by the legislature … then the Constitution is defective.

4. If a system leading to consolidation may be formed or pursued, and if, instead of leaving it to the respective states to encourage their agriculture or manufactures as their local interest may dictate, the general government may by bounties or protecting duties tax the one to promote the other, then the Constitution has not sufficiently provided for the continuance of the union by securing the rights of the state governments and local interests.

5. An essential principle of representative government is that it be influenced by the will of the people, which can never be expressed if such representatives are corrupted or influenced by hopes of office. (A cursory glance at public opinion polls, petitions and massive public displays of outrage over federal acts makes this virtue the most brazenly violated.)

6. Many of these observations were foreseen when the Constitution was ratified by those who voted for its adoption, but waived then because of the vast importance of the union, which a rejection might have placed in hazard. But since experience has evinced that much mischief may be done under an unwise administration and that even the most valuable parts of the Constitution may be evaded or violated, we count no longer to rest our security upon the vain hope which depends on the rectitude of fallible men in successive administrations.

This passage is most poignant and possibly apologetic as Pendleton took the lead in promotingVirginia’s ratification. Pendleton then lists 8 proposed amendments to the constitution, all 8 have a certain [r]epublican charm to them but that makes them more desirable not less if we truly aspire to a return of [r]epublicanism. The last proposed amendments, I believe, are desperately needed to be considered by an Article V convention.

Having, I trust, shown the utility and necessity of such efforts at this time, I will venture to submit to the consideration of my fellow citizens, with great humility and deference, whether it would not be advisable to have the Constitution amended.

Amendment 1. By rendering a president ineligible for the next turn and transferring from him to the legislature the appointment of the judges and stationary foreign ministers, making the stipends of the latter to be no longer discretionary in the president.

Amendment 2. By depriving the senate of all executive power and shortening their term of service, or subjecting its members to removal by their constituents.

Amendment 3. By rendering members of the legislature and the judges whilst in office [and] for a limited time thereafter incapable of taking any other office whatsoever (the offices of president and vice-president excepted) and subjecting the judges to removal by the concurring vote of both houses of Congress.

Amendment 4. By forming some check upon the abuse of public credit, which, tho’ in some instances useful, like fleets and armies, may, like those, be carried to extremes dangerous to liberty and inconsistent with economical government.

Amendment 5. By instituting a fair mode of impaneling juries.

Amendment 6. By declaring that no treaty with a foreign nation, so far as it may relate to peace or war, to the expenditure of public money, or to commercial regulations, shall be law until ratified by the legislature, the interval between such treaty and the next meeting of Congress excepted, so far as it may not relate to the grant of money.

Amendment 7. By defining prohibited powers so explicitly as to defy the wiles of construction. If nothing more should be gained, it will be a great acquisition clearly to interdict laws relating to the freedom of speech, of the press, and of religion, to declare that the common law of England or of any other foreign country in criminal cases shall not be considered as a law of the United States, and that treason shall be confined to the cases stated in the Constitution, so as not to be extended further by law or construction or by using other terms such as sedition, etc.—and

Amendment 8. By marking out with more precision the distinct powers of the general and state governments.

Pendleton’s conclusion is borrowed from the great Virginian George Mason. Consider how fitting it is that a founding patriot gazing upon what he views as the ruin of republicanism on these shores turns to what we consider another “founding father” for guidance!

“In the Virginia Bill of Rights is expressed this inestimable sentiment: ‘That no free government, or the blessing of liberty, can be preserved to any people but by a firm adherence to justice, moderation, temperance, frugality, and virtue; and by frequent recurrence to fundamental principles.’ A sentiment produced, no doubt, by the experience of this melancholy truth, ‘That of men advanced to power, more are inclined to destroy liberty, than to defend it; there is of course a continual effort for its destruction, which ought to be met by correspondent efforts for its preservation.’ “

“These principles and propositions are most respectfully submitted to my fellow citizens with this observation: ‘That it is only when great and good men are at the head of a nation that the people can expect to succeed in forming such barriers to counteract recent encroachments on their rights; and whenever a nation is so supine as to suffer such an opportunity to be lost, they will soon feel that the danger was not over.’ “

Oh no, this danger is clear, present and just getting started.

Pendleton surely exposes and salves Constitutional inadequecies with virtuous ardor and in recognizing the Constitutional lacking, Pendleton’s hindsight becomes foresight. Amendment I and IV are especially in need of our want. What makes this writing, for me, so special is of course not just content, but the style of writing which matches the time period perfectly as it is born out of it and therefore a living part of it. The type of verbiage supplements our federal Constitution’s in a way seemingly not possible with today’s stylings of wording.