Mandeville, LA – Exclusive Transcript – Ms. Sebelius is now on the record as saying we’re going to review the rules we wrote about who gets lung transplants and organ transplants, when they get them, how old you have to be.  That won’t have any effect on anyone currently waiting in line for a transplant.  The Murnaghan girl, in other words, is not going to receive a benefit of the review of the rule.  Check out today’s transcript for the rest…

Mike:  Let’s go to the phones.  Matthew is in Indiana.  Matthew, you’re first up today on The Mike Church Show.  How you doing?

Caller Matthew:  I had a comment regarding some things with transplant.  I’ve actually been working in transplant for seven years as an intensive care nurse at a high-volume center in Indianapolis.  Our particular center is kind of cutting edge.  We do a lot of things that don’t necessarily get done in other transplant centers.  We take a lot of high-risk patients.  Because of that reason, sometimes we have great outcomes that are just miraculous and we set the trend on things that are possibilities.  Other times, because of the high risk, things don’t turn out quite as they should or that we’d like.  Nonetheless, this is a science.  We’re constantly learning and perfecting a craft.

To make an example, one of the things with the Affordable Care Act is we’ve been doing kidney transplants for several, several years.  At least 40 years they’ve been doing kidney transplants.  We’ve got it down to a science.  You put a kidney in somebody, even a deceased kidney in somebody that would not typically yield the best outcome of a living kidney, but these people getting kidney transplants are living 20, 25 years if they take good care of these kidneys.  Because of that, these kidneys don’t have a lot of complications and they have great outcomes because we’ve perfected that craft we’ve been doing it for so long.  It’s cheaper for Medicare and Medicaid, insurance companies to give somebody a kidney transplant.  Now these people are out of the hospital in five days and they’re back home.  It’s cheaper for them to do that than to pay for dialysis three times a week for the rest of this person’s life and deal with all the complications of dialysis, with heart failure and poor vasculature and people’s legs getting amputated…

Mike:  How long before we have drive-thru kidney transplants?

Mike Church Show Transcript: If You Want [r]epublican Kids, Have Them Read Tolkien And Get Involved With Local Politics

Caller Matthew:  Our main surgeon that we have at our hospital has done over a thousand kidney transplants, and he is not very old.

Mike:  It’s almost a mechanical procedure now is what you’re describing to me.  It’s kind of like yeah, I change water pumps.  What’s the big deal?  You lift the hood, disconnect a couple cables, pull a hose out, do the three bolts, take the old one out, put the new one in, torque her down, hook the hoses back up and give the engine a cranking.  If you don’t find any leaks, boom, you’re on your way.

Caller Matthew:  Yeah, exactly.  There are some others that we do.  I think from a perspective of insurance companies, big insurance always follows the trends by Medicare and Medicaid.  If Medicare and Medicaid say we’re not going to pay for that, then insurance companies say: If they’re not going to do it, I’m not going to do it either.  Some of these more high-risk things, like the little girl with the lung transplant, I’m quite familiar with those also.  Lung transplants, multi-visceral transplants, which is another one of our specialties, they are high risk.  The patients generally that require a set of lungs are extremely sick prior to getting the lungs.  Because of that, their odds —

Mike:  Yeah, I’m looking at a picture of this little girl and she doesn’t look very healthy.

Caller Matthew:  No, they don’t.  I think everybody at some point in time has run across the little girl or little boy who has cystic fibrosis.  These are the ones that need lung transplants when they’re so young generally.  It’s some kind of scarring lung disease that they have.  They’re very, very sick.  They have no energy.  They have no reserves within them.  They die at very young ages.  It’s extremely unfortunate.  The problems with lung transplants, it’s a fairly newer type of surgery.  We’ve been doing it a little while, but they still haven’t worked all the kinks out.

Mike:  I would imagine, Matthew, a set of lungs, first of all that’s a pretty large — that’s two organs.  They’re together, but you have a left one and a right one.  That is a large procedure.  I don’t want to get into the details because I don’t know them, but I do know a little bit about open-heart surgery, so I know how you crack a set of lungs.  That doesn’t seem like that’s any fun to recover from or be involved in actually performing.  Without the ability to breathe, there is no ability to live.  This is second only to a heart transplant, the transplant of all transplants.

Caller Matthew:  Honestly, it’s the length of stay.  I’m for keeping people alive.  I’m an organ donor.  I do this because I love it.  We change people’s lives.  The insurance companies, Medicare and Medicaid, the Affordable Care Act, things need to be privatized.  Insurance needs to be privatized.  They need to open the markets up so that everybody can pick their own insurance, not from an Obamacare standpoint.  We need to be able to shop ourselves.  That’s the only thing that’s going to drive down the cost of insurance.

Mike:  As you and I were talking, I just read the nuts and bolts of the story.  The little girl’s name is Sarah Murnaghan.  She’s ten years old.  If she was twelve years old, apparently whoever it was — when I asked Andrew whether or not he would want to be on the committee that was charged with writing life or death human organ transplant rules, he said no.  I don’t want to be on it either.  Apparently there were people on it and they wrote the rules.  The rule is you’ve got to be twelve years old to be qualified, according to the Health and Inhuman Disservices Department, you must be twelve years old to qualify to be an adult to get an adult set of lungs.  Children’s lungs are very difficult to come by.  Children have lower mortality rates, I’m just guessing here.  Children don’t die as often as geezers like you and I, Matthew, do.  I’m more geezer than you, it sounds like.  So it’s more difficult to find donors for children who need spare body parts.  Apparently that is where the rule is coming in at.

Ms. Sebelius, this woman is just despicable.  Despicable Me 2 is coming out in theaters this summer.  You don’t have to wait for it.  It’s already here.  You can find it at the Health and Inhuman Disservices Department.  Ms. Sebelius is now on the record as saying we’re going to review the rules we wrote about who gets lung transplants and organ transplants, when they get them, how old you have to be.  That won’t have any effect on anyone currently waiting in line for a transplant.  The Murnaghan girl, in other words, is not going to receive a benefit of the review of the rule.

Matthew, thank you very much for your very insightful phone call.  You now have an instance in which — remember, this was denied.  This could never happen.  The Affordable Care Act isn’t going to kill anyone.  Obamacare is not going to cost one life; it’s going to improve people’s lives.  There’s never going to be an instance where there’s going to be any kind of a death panel.  Remember?  While this isn’t a death panel in total actuality, because of the rule if there is not a juvenile lung available for the Murnaghan girl, she is not eligible to get the adult lung, then death may ensue, as tragic as that is.

Sebelius allegedly has the authority to do something about this.  If you start doing this, though, if you start saying: Okay, it wasn’t really a rule.  It was just kind of a suggestion so we’re going to make an exception here.  If you make the exception here, then, of course, as soon as it comes up again, the next person is going to say: You made an exception for them; you’ve got to make an exception for me.  Doesn’t the government have to be blind and totally fair and all these things?  This is why this never should have wound up in the hands that it’s in.  The entire story is just tragic, unbelievably tragic. 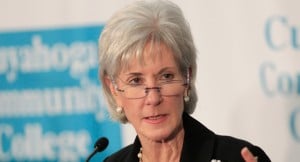 The transcript view works for our test account. Does this problem occur on any other pages? If so, open a support ticket and we will investigate.

I am logged in with my founder’s pass but I can’t read the entire transcript of yesterday’s story on the 10 year old. Can you please fix it?