Mandeville, LA – Rowan County Kentucky Court Clerk Kim Davis refuses to issue “marriage licenses” to homosexuals and she is right to do so, and worthy of your [re]publican and Christian defense, despite the reigning “media” authorities of our time insisting that she “enforce the law.” Who is actually a St. Benedict or a Benedict Arnold here? I humbly submit certain conservative writers are in Red Coat uniform, and here’s why.

UPDATE 10:10 P.M. CST 03092015 – Now that Kim Davis has been arrested and the Kentucky Governor, AG, U.S. Senators and House of Representin’ DeceptiCONS cannot locate shining armor, creedal vows to become a Knight of St John or a Rosary, Ms Davis’s white martydom is a fait accompli. One of the protagonists of this essay have responded by proclaiming that Kim Davis groupies (she is now our Michael Brown) will “withdraw” form “public squares” (can you you name ONE and tell us the last time a “we” gathered in it for anything other than a spring or fall concert featuring a retired Bangles singer?) and that we have “no end game and don’t care [if we have one]”. Oh, and furthermore, “Kim Davis is a bad martyr for the cause of religious liberty”. Oh really? That’s strange, I have a 4 volume set of Alban Butler’s “Lives OF THE FATHERS, MARTYRS and OTHER SAINTS” a stirring, day by calendar day record of the titular’s day to day life and death, many times in martyrdom. The funny thing is that God has this knack for choosing the least likely candidates for saints and martyrs. e.g. two days before St Stephen the apostle was martyred, Saul of Tarsus assisted in his public calumny, then conspired to have more drastic action taken if Stephen became what I call a Truth recidivist, then watched and encouraged his mock trial and subsequent stoning. 2 days after this, Saul of Tarsus, the man who would be martyr maker king, became Paul the Apostle. It’s a good thing the American Conservative wasn’t publishing then, readers may have snickered and ignored the “convert” (that’s what Ms Davis is) Saul and proclaimed him “a bad martyr for religious liberty”. I might ask the question, pray tell, just who IS a GOOD martyr for religious liberty? The TV heretics who want you to know that God loves you and wants you to live in a bigger house surrounded by newer and more expensive cars?

“…under the First and Fourteenth Amendments, criminal laws in this area are constitutionally limited to hard-core pornography. I shall not today attempt further to define the kinds of material I understand to be embraced within that shorthand description, and perhaps I could never succeed in intelligibly doing so. But I know it when I see it, and the motion picture involved in this case is not that.”

OK, what does any of this have to do with homosexual marriage licenses that are now the “law of the land,” and Mrs. Davis?

For starters, the SCOTUS is not a legislature, it is a body that reviews the acts of a singular legislature (perhaps you’ve heard of it, its called Congress). AND according to its charter (Article III of the U.S. Constitution) this body only has power to settle controversies arising under the Constitution or between States involving that legislature or the Constitution. We are now wading into factual territory that Constitutional imbeciles and rookie anarchists dare not swim for the obvious reason that facts ruin good Facebook posts and blog screeds written by neo-Christian “optionists.”

In the Obergefell “decision” the SCOTUS had no plenary power to make or enforce law in any of the states that were either a party to the suit or engaged in actions with a party to the suit. The SCOTUS purported to “strike down” the legally enacted laws of those 31 states and therefore made “gay marriage” “legal.” This is the equivalent of the SCOTUS saying that Kentucky cannot have a law licensing drivers, but the court cannot say that KY must have a law licensing drivers of the SCOTUS’s choosing and neither does the Constitution. And there ends the argument, in its cradle and no “Benedict option” or “win-win” compromise can rescue it regardless of the author’s good intentions.

Pseudo-legalists are by now ready to quote Brown vs Board of Education to me and say (sic) “Mitter Chur, that ith eggthactly what the Thupreme Court Did in Brown and we are all better oth for ith.” Wrong. Elevating 9 lawyers from 2 law schools to make all moral and municipal decisions for 309 million people is not only wrong, it is antithetical to the reason we have a federal compact to begin with: the enumeration to the General government of certain powers that the ratifying parties possessed full, sovereign, jurisdiction of a priori for those SPECIFIC purposes and no others (this is the reason, BTW,  Patrick Henry insisted there be a [10th] Amendment attached to the Constitution BEFORE ratification).

Back to our story’s anti-heroes: In whose “better way” [Anderson] or “Benedict option” [Dreher] world did KY or VA or GA or LA or AR et al enumerate municipal, marriage laws (or divorce laws) to Congress? Where!? When?! It is actually the demonstrable case that those states did the exact opposite, very loudly and in front of a watching, blogging and judgement-porn hurling world. Does this legal, moral and traditional act, nay, expression of self-government matter or doesn’t it? It seems that every time there is a controversy that requires the martyrdom of a few Facebook friends or seats at the annual pancake dinner head-table, we are told to “do what’s right” and surrender.

But what’s at stake here is more than just the conscience rights of bureaucrats, and even more than marriage. It’s the historic understanding of constitutional government, which we are once again being asked to give up.

What does American history say? I will spare our subjects the useful condemnation their words words would recive from Orestes Brownson and instead impart the more secular clarion. The loudest and wisest voice among the Founders, warning of exactly this, was John Taylor of Caroline County. In 1808, Taylor wrote a series of newspaper editorials that defended and exonerated the term [r]epublcan from “it’s the law of the land” pansies who tried to hijack it, buckling under the soft pressure of dubious Yankee tariffs and manipulation into fielding standing armies, insisted the Constitution granted no such power to abuse — moreover even if it did, it should be ignored. In Spirit of ’76 # VI, Taylor wrote:

“The doctrine “that nations ought to stick by their governments,” right or wrong, is apocryphal where the sovereignty of the people exists. Are governments the best judges of national interest? No. The most honest? No. How are the degrees of liberty and tyranny graduated? From free discussion and national will down to passive obedience. “

The “national will” is today for “gay marriage” but there is nothing “national” about compulsory acceptance of sodomy, no more than there could be compulsory acceptance of “forms” of incest, provided “the court” said so. We’ve already volunteered to accept polygamy in the West. How so, you ask? Well, if the accepted terms of marriage before the time of Henry VIII were in effect today, marriage would be sacramental and thus any subsequent “re-marriages” would be … go ahead, you fill in the blank for me ____________.

The laws on the books in KY say there is no “gay marriage” to be licensed because the state doesn’t recognize it. in 1794 when they ratified the Constitution they didn’t recognize it. When they were forced to “ratify” the 14th Amendment in 1869 they did not “recognize” nor did they “enumerate” to Congress their municipal power over marriage or divorce in that ratification. So exactly which “law of the land” are Ryan Anderson and Rod Dreher insisting Mrs. Davis “enforce”? And if she will not accept the terms of this extortion, must then, “resign”? To do what precisely, become part of the damaged-soul herd meandering toward the cliff Our Lady prophesied at Fatima?

Mrs. Davis rightly claims obedience to “the law of God,” and is right to do so because without acknowledging His law there can be no recognizable law afterward. It is to the benefit of both the sodomite and the heterosexual that the governing authority not legally recognize or endorse their sinful perversions; but, since it does solemnly recognize them at Dreher and Anderson et al’s insistence, this of course means “Benedict option” fortresses might be filled with adulterers and homosexuals; seeing that few moralists St. Paul might recognize as pious would be publicly accepted, praised and defended. I suspect Dreher and Anderson might have wished that a poll be taken among Herod’s subject’s as to whether St John The Baptist should pretend he was not privy to Our Lord’s sermons on adultery or the Old Covenant’s law that He “came to fulfill” and thus, he were free to compromise a “win-win” deal for Herod and the polygamists in waiting (for licenses).

Error has no right to our minds or to control our moral affairs, says St Thomas Aquinas. In fact, we have been blessed with abundant, Christian guidance on moral questions such as these so as to prevent erroneous and Facebook inspired popular conclusions, to wit:

“We do not, indeed, attribute such force and authority to philosophy as to esteem it equal to the task of combating and rooting out all errors; for, when the Christian religion was first constituted, it came upon earth to restore it to its primeval dignity by the admirable light of faith, diffused “not by persuasive words of human wisdom, but in the manifestation of spirit and of power,” so also at the present time we look above all things to the powerful help of Almighty God to bring back to a right understanding the minds of man and dispel the darkness of error.”

The “darkness of error” has now left the SCOTUS building and has gaseously spread into the homes and offices of the erstwhile Christian press corps, who now perform due diligence on error’s behalf ostensibly because error must not be allowed to make us erroneous i.e. defy the “law of the land.”

The actual “law of the land” requires us, with complete Faith, Hope and Charity, to not ice “wedding” cakes, take “wedding” photographs or issue “marriage” licenses to or for anyone, ourselves included, who may find themselves on the wrong side of well known, yet ignored, moral theology. You don’t need to build a wall or “option” a town to do that, you just need to pray for humility and fortitude. Just ask St Jane de Chantal… 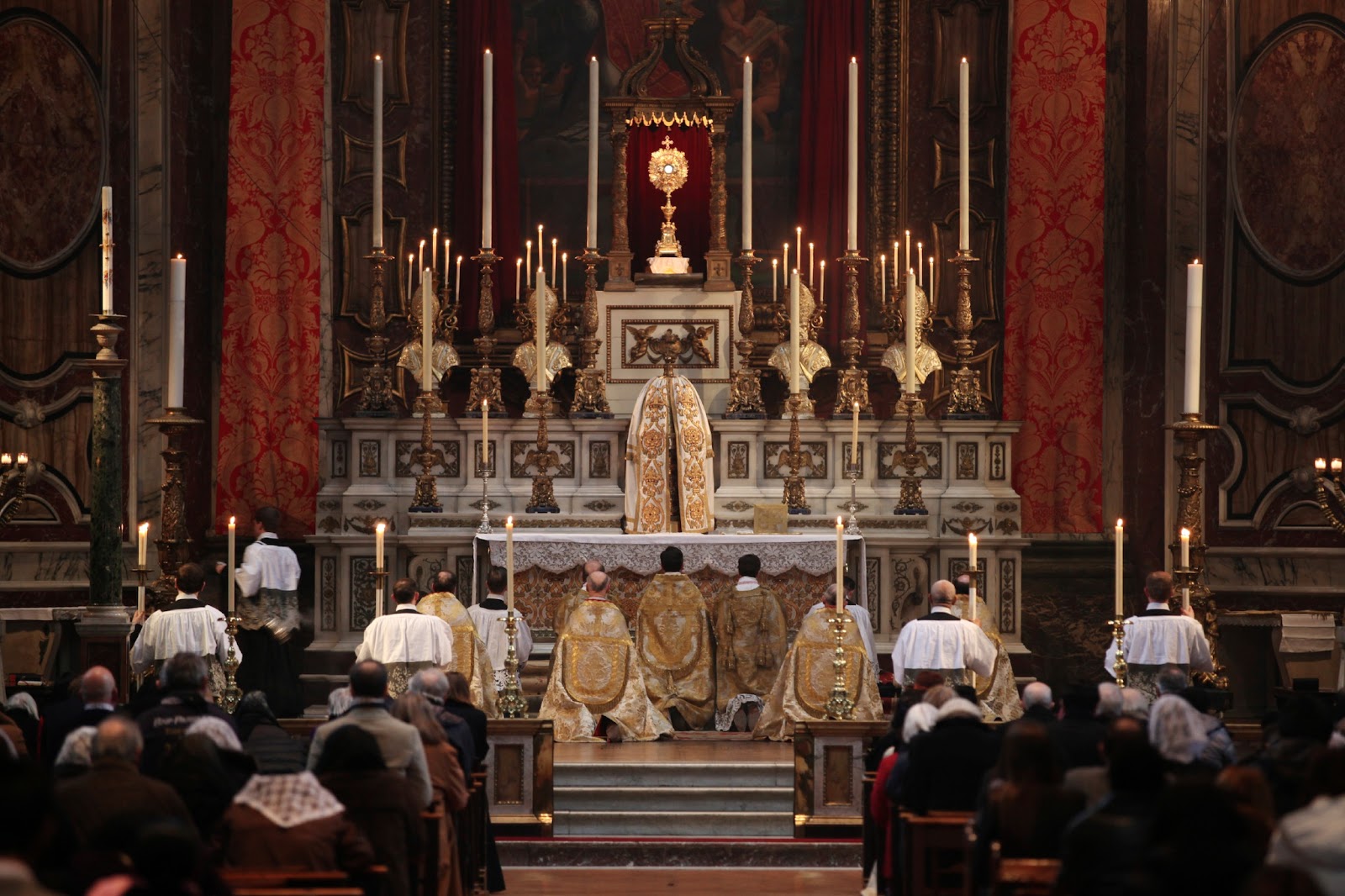