Mandeville, LA – Every year, on January 6th, The Catholic Church celebrates her most versatile yet undervalued and respected feast: The Epiphany of Our Lord. From the New Orleans’ annual ritual of “King Cake Season” (yes, we really have a season to make cakes!) to the actual date of Christ’s baptism in the River Jordan to the presenting of gifts from three earthly kings, The Magi, to the King of Kings, Jesus Christ of Nazareth, The Epiphany is a jewel of our Catholic Faith and Tradition, but what do we actually know about it? Let’s start with the easy stuff, the definition of Epiphany. From the Online Etymology Dictionary we find.

early 14c., “festival of the manifestation of Christ to the gentiles” (celebrated Jan. 6; usually with a capital -E-), from Old French epiphanie, from Late Latin epiphania, neuter plural (taken as feminine singular), from late Greek epiphaneia “manifestation, striking appearance, festival held in commemoration of the appearance of a god at some particular place” (in New Testament, “advent or manifestation of Christ”), from epiphanes “manifest, conspicuous,” from epiphainein “to manifest, display, show off; come suddenly into view,”

A Feast With Many Meanings

Dom Prosper Gueranger has an incredible write up on the Epiphany, you can read the whole thing here, I will choose some fascinating nuggets from Gueranger to stoke your curiosity. Let’s start with the origin of The Epiphany.

The Feast of the Epiphany is the continuation of the mystery of Christmas; but it appears on the Calendar of the Church with its own special character. Its very name, which signifies Manifestation, implies that it celebrates the apparition of God to his creatures. For several centuries, the Nativity of our Lord was kept on this day; and when, in the year 376, the decree of the Holy See obliged all Churches to keep the Nativity on the 25th December, as Rome did – the Sixth of January was not robbed of all its ancient glory. It was still to be called the Epiphany, and the Baptism of our Lord Jesus Christ was also commemorated on this same Feast, which Tradition had marked as the day on which that Baptism took place.

So a lot is going on here on The Epiphany! The 3 Magi, presenting their gifts, the Baptism of Christ by St John The Baptist, as if that’s not enough to melt the heart of the most committed enemy of The One True Church, there is yet one more miraculous and Holy event commemorated on The Epiphany. Dom Prosper, again.

[A]nd thirdly, the mystery of the divine power of this same Jesus, when he changed the water into wine at the marriage-feast of Cana.

Right now you’re screaming, “but Mitter Chur, the Wedding Feast at Cana is celebrated on another day, you loser!” It is on the Second Sunday AFTER Epiphany!! True, the actual spot on the Traditional calendar where the feast of the Wedding at Cana is held is on that date but this is easily explainable. Dom Prosper, again.

The precise day of the miracle at the marriage-feast of Cana is far from being as certain as the other two mysteries, though it is impossible to prove that the sixth of January was not the day. For us the children of the Church, it is sufficient that our Holy Mother has assigned the commemoration of these three manifestations for this Feast; we need nothing more to make us rejoice in the triple triumph of the Son of Mary…The third mystery of the Epiphany being also somewhat kept in the shade by the prominence given to the first, (though allusion is several times made to it in the Office of the Feast,) a special day has been appointed for its due celebration; and that day is the second Sunday after the Epiphany. [emphasis mine – MC]

If you’re as old as I am, you can remember the old electric football games many of us had and played but do you remember the star player on every electric football game set? The Triple Threat Quarterback, an epiphany to 1970’s home entertainment! The point being, great things come in sets of three and that is no accident, the Trinity, therefore is present in many great things including The Epiphany of Our Lord.

A Cake Fit For A King

The first great mystery of the Epiphany and the most celebrated on this day is the King’s Feast, the coming of The Magi which we celebrate in today’s liturgy from Saint Matthew’s Gospel, chapter II.

When Jesus therefore was born in Bethlehem of Juda, in the days of king Herod, behold, there came wise men from the east to Jerusalem. [2] Saying, Where is he that is born king of the Jews? For we have seen his star in the east, and are come to adore him… [11] And entering into the house, they found the child with Mary his mother, and falling down they adored him; and opening their treasures, they offered him gifts; gold, frankincense, and myrrh.

Note again, the presence of Trinity, gold, frankincense and myrrh, a small, floral tree that is prized for its oil and ability to serve as a fragrant wherever it is placed (the first Christmas tree!). Now what does this have to do with Cakes and Kings? Well, quite simply, for the Middle Ages faithful and their French diaspora into the new world’s New Orleans, everything. Dom Prosper, again.

There was another custom, which originated in the Ages of Faith, and which is still observed in many countries. In honour of the Three Kings, who came from the East to adore the Babe of Bethlehem, each family chose one of its members to be King. The choice was thus made. The family kept a feast, which was an allusion to the third of the Epiphany-Mysteries – the Feast of Cana in Galilee – a Cake was served up, and he who took the piece which had a certain secret mark, was proclaimed the King of the day. Two portions of the cake were reserved for the poor, in whom honour was thus paid to the Infant Jesus and his Blessed Mother; for, on this Day of the triumph of Him, who, though King, was humble and poor, it was fitting that the poor should have a share in the general joy. The happiness of home was here, as in so many other instances, blended with the sacredness of Religion. This custom of King’s Feast brought relations and friends together, and encouraged feelings of kindness and charity…  that the Twelfth Cake and the custom of choosing a King, are mere imitations of the ancient pagan Saturnalia. Granting this to be correct, (which it is not,) we would answer, that many of the old pagan customs have undergone a Christian transformation, and no one thinks of refusing to accept them thus purified. 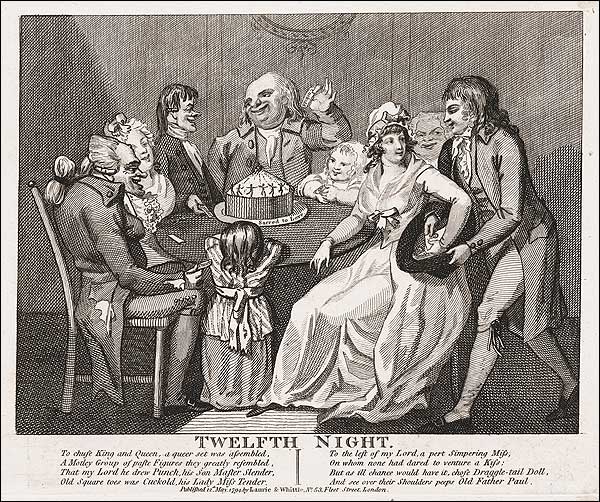 Today in New Orleans, King Cake Season begins, hundreds of thousands of these delicious cakes will be made, sold and consumed at King Cake Parties, across the region and many tens of thousands more will be shipped across the land. We the faithful, should encourage this practice and participate in it, taking every chance to restore some Holiness to the tradition if nothing more than pausing for the blessing before eating and reminding our friends of the reason for the 3 colors adorning the cake as icing: gold, frankincense and myrrh i.e. gold, purple and green.

Behold, a KingCake made in homage to the King of King’s, the Babe of Bethlehem, bon appetit and Blessed, Happy Epiphany of Our Lord and King!