Mandeville, LA – Exclusive Transcript – Thomas J. DiLorenzo has a piece out at LewRockwell.com today.  It’s called “The Real Lincoln in His Own Words.”  If you’re a Lincoln lover, you need to read this.  If you’re not a Lincoln lover, you really need to read this.  DiLorenzo cites a new book that’s out there called Lincoln Uncensored.  It’s written by a guy named Joseph Fallon.  Check out today’s transcript for the rest…

Mike:  Thomas J. DiLorenzo has a piece out at LewRockwell.com today.  It’s called “The Real Lincoln in His Own Words.”  If you’re a Lincoln lover, you need to read this.  If you’re not a Lincoln lover, you really need to read this.  DiLorenzo goes into that Lincoln was the great equalizer, the great emancipator, the great promoter of diversity and equality and all that stuff.  Really?  What history book did you read that in?  DiLorenzo cites a new book that’s out there called Lincoln Uncensored.  It’s written by a guy named Joseph Fallon.  Here he’s referring to Lincoln viewed as the great emancipator, great equalizer, great racially-diverse, racially-sensitive president that did all these magnanimous things selflessly to begin the process of equality among the races.

This view of Lincoln, writes Fallon, is only true “in official histories or in Hollywood movies” but not in reality. The reason for this historical disconnect is that “this myth of Lincoln, not the Constitution . . . now confers legitimacy on the political system of the United States.” [Mike: That is exactly the point that I make in What Lincoln Killed: Episode I.] Despite being mostly a bundle of lies, it is nevertheless the ideological cornerstone of statism in America and has been for nearly 150 years.

Founders TV: The War of Northern Aggression Goes Ever On

Mike:  That’s one mythology and one myth that has guaranteed and continues to guarantee the super gargantuan size of our leviathan state, because we had to have it.  It was our destiny…

The real Lincoln was a dictator and a tyrant who shredded the Constitution, fiendishly orchestrated the mass murder of hundreds of thousands of fellow citizens, and did it all for the economic benefit of the special interests who funded the Republican Party (and his own political career). But don’t take Joseph Fallon’s or Thomas DiLorenzo’s word for it. Read the words of Abe Lincoln himself. That is what Fallon allows everyone to do in his great work of scholarship, Lincoln Uncensored. No longer do Americans need to rely on politically-correct, heavily state-censored textbooks or movies made by communistic-minded Hollywood hedonists to learn about this part of their own country’s history.

Mike:  Here are some selected quotes from The Collected Works of Abraham Lincoln:

“Free them [blacks] and make them politically and socially our equals? My own feelings will not admit of this . . . . We can not then make them equals.”

“There is a natural disgust in the minds of nearly all white people, to the idea of an indiscriminate amalgamation of the white and black races.”

“What I would most desire would be the separation of the white and black races.” [Mike: I wonder who this guy is that he’s quoting. It can’t be Lincoln. He’s the star of killing Lincoln. He is the great American president. There’s even a monument to him right there in Mordor on the Potomac River.]

“I have no purpose to introduce political and social equality between the white and black races . . . . I, as well as Judge Douglas, am in favor of the race to which I belong, having the superior position. I have never said anything to the contrary.”

Lincoln only rhetorically opposed Southern slavery. In practice, he strengthened it. Lincoln was economically ignorant of the big economic issue of his day: protectionist tariffs. Lincoln championed the fugitive slave act saying, “I do not now, nor ever did, stand in favor of the unconditional repeal of the fugitive slave law.”

Mike:  There’s much more on all of this.  I need to get a copy of this book and maybe talk to the author.

In the season finale of the TV show Revolution, Philadelphia and Atlanta, which are now two warring republics — I hope you people are getting the metaphors here.  Philadelphia represents the North, Atlanta represents the Confederacy, and this guy is going to intervene and take both of them out because a house divided against itself can’t stand.  He’s going to do it with nuclear hell.  In the last shot of the last episode is the deposed former President of the United States who has holed himself up for the last twelve years since the power went off.  He’s been in a bunker hiding in Guantanamo Bay, Cuba.  He gets the call: Mr. President, it’s time to go home.  Then they cut to a shot above the bunker and there’s an American flag flying.  Then it fades to black: Revolution will resume next fall with brand new episodes.

I watched this and I don’t believe I just saw this.  You’re going to quote Lincoln and then you’re going to unleash nuclear hell and fury?  In order to bring the Union back together, you’re willing to annihilate millions of survivors in Atlanta so that they’ll stop their internecine border feud?  You’re going to do it after quoting Lincoln?  I tweeted that out.  I even used the Revolution hashtag.  I got 0.0 replies.  If I were to just go and Tweet that quote from Lincoln and hashtag it, I probably would have gotten all kinds of activity.  Sometimes the Twitter doesn’t act in a manner in which it does for everyone else.  I was blown away by the use of Lincoln to begin a nuclear Armageddon in the United States. 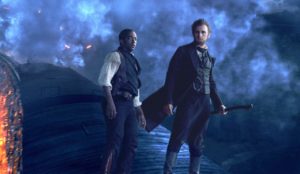