REPORT OF JUNE 24, 2012 From the Citizens of BeerBeeria-assembled in General Council in the township of Abita Springs, LA – The second session (after intermission) was VERY productive. We formed the skeleton for the plan of government of BeerBeeria. A bi-cameral legislature, with a lower house elected to 2 year terms and representing no more than 10,000 citizens. We granted the legislative lower house, 7 enumerated powers thus far and made the gold & silver coin/currency power bulletproof. Internal improvement projects are denied by affirmation.

We tabled the method of selecting the Upper House because there was a lot of debate over whether the instrument (The Plan) should proscribe that term or whether the PARISHES (counties) could specify the term as the wish because this chamber represents the parishes. Our Executive serves a 4 year term and has only 3 enumerated powers – CIC, Execute the laws and Veto the Legislature.

Our judiciary council is ELECTED by the people to 6 year terms, has only 1 Court (no inferior courts) and can only hear disputes arising under the Instrument or suits brought by citizens to negate legislative acts.

Immigration was tabled but the early debate was about requiring sponsorship for admission. We also voted to deny universal suffrage but could not conclude the requirements.

That is as far as time allowed, it was exciting to be a part of this, we will be putting a highlight reel together for you to listen to. Every region in the country should convene one of these meetings and discover the challenges of using our experience to form new governments.

Here is the back story of why BeerBeeria need to form a government.

It is 2019 and it has been 3 years since the national government of America collapsed due to insolvency.  The State governments followed soon thereafter and since then the cities are ghost towns while the smaller towns are populated by 1/10th of their former populations 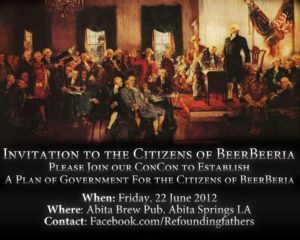 There has been nearly constant skirmishing between roving bands of marauders and citizens who have organized themselves around strong families with farms.  In an effort to unite against the marauders and end their raids, the leading families have each sent representatives to a conclave in the village of Abita Springs.  You are one of those representatives and are being called upon to help establish a working government in the area comprising the former Washington and St. Tammany parishes.

The mood is sour and distrust reigns supreme.  The farm owner who sent you to this meeting is not too keen on the idea of ceding any of his power to a governing body, but he recognizes that it is unlikely that he can maintain order in his area without a joint effort.

The conclave quickly through together a list of “powers” that the new government “ought” to have.  They are now asking you and everyone else to vote on these powers, amend them where necessary and to decide upon the best form of government to accomplish those ends.

It occurs to me that an Upper House member’s term could be “At the pleasure of the Parish council”. Thus you have representatives who must remain responsive to the Parish at all times or risk immediate replacement. I believe politicians should be in constant fear of losing their jobs. Security breeds complacency.

I see this as a strong possibility within the timeframe posted. Long before 2019! At this point the citizens of each town, city, and state need to be getting prepared for just this. However, I do not believe it will be roving moraders. I believe it will be foriegn governments coming to take a piece of what our government has used for collateral against our will. Plans need to be set so every American knows where to go to help fight against these foriegn powers! This may even include some, if not most of our own military that has been taught to obay orders no matter whom it may be against!
Prepare now!