Mandeville, LA – Exclusive Transcript – I’ve talked on this show in the past about a term that a colleague had coined: radical autonomy.  It’s pretty much the same thing.  Most people today are radically autonomous.  There is no higher authority other than your own conscience.  The only higher authority we have is the blind, relentless, silly, and I think misguided pursuit of total equality.  You’ll never achieve it.  It does not happen in nature.  I don’t think it happens anywhere.  Check out today’s transcript for the rest…

Mike:  “Understanding the Marathon Bombers,” I was intrigued by this when I read this last night.  My buddy David Simpson had sent this to me.  Even though this piece was posted on the 29th of April, I did not discover it until last night.  It still has relevance here today.  I’m only going to do a part of this.  It’s written by John Horvat, II.

There are many who seek to explain the mystery of the Boston Marathon bombers — or all our killers that are fast becoming a part of our national landscape.

For a long time, we have lived in a “golden age” of modern individualism. Our whole society was organized around the idea that each person was the sole architect of his own freedom and destiny. Each claimed the inebriating freedom to define a concept of existence, meaning and way of life. In theory, these individualists lived isolated, like atoms, in their own private worlds, pursuing their own self-interest.

However, in practice, this freedom could only work when people’s dreams did not collide. When working with others in modern society, we engaged in a “social contract” or partnership where each agreed to abide by certain rules so that each could seek one’s own advantage, fun or pleasure. Even the State was seen as a mere mechanism to facilitate or enforce these contracts in the pursuit of self-interest.

What happened in Boston is a signal that this “golden age” of modern individualism is now ending. Some people are no longer abiding by the rules. A new class of individualists has appeared which shares the same fascination with unlimited freedom, but with one major difference: they no longer feel restrained by the terms of any contract.

Free of all restraint, the postmodern individualist believes he can be whatever he wants to be — mass murderer, terrorist, jihadist or the Joker in Batman. He constructs his own fantasy and acts it out with terrifying deliberation. If individualism turned individuals into isolated atoms, its postmodern mutant split the atom, starting a chain reaction of devastating destructive power.

Mike:  I’ve talked on this show in the past about a term that a colleague had coined: radical autonomy.  It’s pretty much the same thing.  Most people today are radically autonomous.  There is no higher authority other than your own conscience.  The only higher authority we have is the blind, relentless, silly, and I think misguided pursuit of total equality.  You’ll never achieve it.  It does not happen in nature.  I don’t think it happens anywhere.  Equality is our id, our mantra, what we pursue.  It’s what we are told is the mission of America, the mission of Americans.  It doesn’t matter what form that equality comes in, but that’s what we are relentlessly in pursuit of.  Hell, how many people run around talking about [mocking] “We formed this country to have a more perfect union.  We’re still working on the more perfect union.  We’re all working on equality.”  As we’ve talked about here on this show hundreds of thousands of times, no one is born equal.  You may be equal in the eyes of God.  Understanding that will get you a lot farther than believing there is some earthly equality that you are due and that others must provide to you or must observe in your pursuit of your own radical autonomy and your own radical autonomous goals.  Horvat makes this point in print more brilliantly than I believe I ever could.

Founders Corner: Earl of Chesterfield: Letters to His Son

Some say that the solution is to return to the days of classic individualism where each looked after his own self-interest and fun, abiding by a minimal set of rules. The problem is that once large numbers of people have become postmodern individualists, [Mike: Or as I say, radical autonomists.] there can be no return to this classic individualist normality. Our killers are already among us. There is no government or army in the world that can protect us from the multiple possibilities for disaster. There is no way to keep all potential threats under observation.

The only way for society to defend itself is to return to an order that re-establishes conditions for true freedom, not fantasy. Ironically, this order is not found in individualism. It is an illusion to think that individualism of any sort can be the source of our freedom and order in society. Modern society merely lived off the social capital accumulated in times past.

When morality informs society, we have a social fabric that strengthens and supports the individual and prevents monster killers from appearing. Just as individual threads are woven together in a cloth, the individual inside the social fabric is gently held in place and finds true meaning and purpose in life. He is not a loose, dangling, purposeless thread, enslaved to whims and fancies that harm and weaken the whole fabric.

Mike:  This essay is posted at the website, MikeChurch.com.  You can read the entire essay for yourself.  I think Horvat is just repeating some of the themes we’ve hit on here on the program and on the show and website and in other discussions over the past couple of years, more so in the last two years, I would say.  It is the pursuit of the permanent things.  This is what the conservative movement was supposed to do.  This is what it has failed so tremendously in actually doing.  Now the term conservative, as I’ve talked about a hundred thousand times, has come to mean commercial interests.  It only means something if there’s a new book, new movie, new show, new site out there that purports to be promoting it.

What is it that those things are purporting to promote?  Are they promoting the transcendent, eternal things like obeisance to God and to God’s moral codes and a life spent trying to be a knight, as in the knights of the old world?  You know those guys who ride up on white horses in shining armor and save damsels in distress?  When they’re not saving damsels in distress, they’re out acting as society’s and as a civilization’s keepers, always with the finest manners and with the most humble appearance and presence before God, which is always.  I think a lot of our problems could really just be described as an overabundance of arrogance, not enough humility to go around.  Read the entire essay.  It’ll get your thought process going. 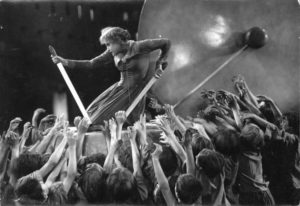