Mandeville, LA – Exclusive Transcript – If you really want a solution, if you’re really looking for a radical way to deal with this latest scandal, instead of screaming and hollering at Obama and the IRS, which you’re going to do anyway.  You’re always going to protest mightily against a tax collection agency.  If you really want something to sink your teeth into, ask the question of why.  Why was all this necessary?  Check out today’s transcript for the rest…

Mike:  On the plane yesterday, I finished reading Claes Ryn’s phenomenal book The New Jacobin.  I even tweeted this out.  If you want to learn the distinction between a decepticon and the old-school, intellectual conservative, this is a great place to start.  It’s an easy book.  You can read it in an afternoon.  I hadn’t read it and I actually started about halfway through the book, even though I had read probably 40 of those pages, I re-read and added another 80 pages to it on my journey yesterday.  I feel like I am loaded for weak tea-sucking decepticons today.  As I am reading Ryn’s book, I’m getting angrier and angrier and angrier and going: That’s it!  That’s exactly right!  That’s exactly what it is, that decepticonia.  You call them neocons.  I call them decepticons.  This is exactly what they’ve been doing, and yes, they are frauds.  They are former Marxist Trotskyites, many of them Democrats who invaded the conservative movement, basically took it over, brainwashed the foot soldiers and now we have this edifice, this domestic political empire that has been erected.  Most of it is to the credit and at the behest of the decepticons.  That is a mighty achievement, ladies and gentlemen.

Ask yourself this question, as we ponder the IRS tax scandal, and try to mix this in with it.  The 501(c)(3) designation is so you can be a non-profit.  If you’re a non-profit, this means that you’re doing this — you want to form a Tea Party group for what purpose?  What is the stated purpose?  It has to be some kind of universal, community-based, “we want to help the world” kind of program, or whatever the case may be.  Was the goal of the Tea Party group actually nullified by the actions of the IRS?  This is a question I haven’t seen anyone pose.  Were the designs, were the advocacy, were the plans, were the schemes, were the calls to action of those Tea Party groups, were they actually thwarted by the IRS action, or were they made more difficult to attain?

AG:  Most of the questions that have arisen, in terms of what the left is saying in regards to the IRS Tea Party scandal, go back to the Supreme Court ruling of Citizens United v. the FEC.  Do you think that, kind of shifting the argument to that discussion, of whether or not the changing of the election rules and what a non-profit can do in terms of campaigning —

AG:  Right.  The liberals have said this is in response to groups like Karl Rove’s Stand for America [sic] or whatever his PAC has been called being able to influence the elections and trying to shift the blame from the IRS agents to the Supreme Court ruling.  Will that work in their favor?

Mike:  What I find amazing about that is, we started talking about 501(c)(3) and 501(c)(4).  Now we’re talking about 527s.  Are you noticing a trend here?  All these things have one thing in common: they’re all political distinctions defined by a government agency, by the IRS, apparently with the blessing of Congress.  Remember, the Citizens United, the gentleman involved in that suit, is a man by the name of David Bossie.  The ruling basically says [mocking] “You can’t limit entities from spending their political capital the way they’d like to spend it.”  The Citizens United ruling basically allowed certain entities to do what?  It allowed them to try and influence either the electoral process or the sausage-making process.

We’re still talking about the same — you’re arguing about the rules.  You’re arguing about who gets to make the rules.  Does the Obama administration get to make the rules?  Does the Bush administration get to make the rules?  At the end of the day, someone is still making rules.  You still have partisanship is the order of the day.  It just depends on what party is in power.  Folks, nothing about the menacing and growing size of the government is affected by any of this.  Win, lose, or draw, the Tea Parties win and every head rolls at the IRS.  That will not appreciably reduce the size of the federal monster.  All it will do is put a want ad out on the internet: Wanted: New IRS Agents – Apply Within.

AG:  It’s one of the more interesting questions you raised in the first hour in terms of would Obama or directly his administration have any role in the IRS making this policy?  I think the general feeling is no, they wouldn’t have any direct ruling to say target these groups more closely or have more scrutiny on them.  The idea is, the Obama administration wants to win reelection, so if we slow down these Tea Party groups from having the ability to influence in an election, does that have more favor for us and potentially more career advancement because we slow down these Tea Party groups, because that then limits their ability to spend money in a campaign season, whether that be in a general election, a House race, a Senate race, a governor race to ultimately allow more Democrats to be elected?  Does that bode well for our future career advancement?  Yes.  That was one of the interesting points, I thought, that was raised on CNN yesterday right before President Obama spoke for three minutes about how upset he is and how this behavior is inexcusable.  This did potentially have real-world implications in the election because you had agents delaying conservative groups from putting their money to use in campaign ads.

Mike:  That’s the question that you raised.  Did the interregnum have any material effect on the goal and stated purpose of the group?  When they filed this paperwork to try to become listed as whatever it is they’re trying to become listed as, did the delay by the IRS have any effect on that?  That’s the question that any hearing is going to try to get to the bottom of, then the pundits want to talk about, but that doesn’t have anything to do with — again, there’s a giant forest.  You’re staring at a little piece of bark on one tree.  There’s a giant forest all around and it is that gargantuan agency known as the IRS.  By the president’s own admission, [mocking] “It affects everybody’s life.  Every one of us is affected by it.”  Well, if we’re all affected by it, then it would seem to me then that that’s the reason why this is a scandal.  It’s a scandal and we’re all affected by it.

AG:  We can’t have a definitive answer of saying yes, the IRS limiting or delaying or somehow hampering these groups from being able to exercise what has been legally passed down in the SCOTUS ruling as allowed to do in campaigns, through political ads, printing of banners, signs, yard posts, but I think the idea of what was raised yesterday that I heard on CNN, no one had made that connection as clearly as they did.  It’s really upsetting in that the influence on the election, illegally by these IRS agents is something we could never really prove, but it should be discussed.  We played Boehner earlier talking about who’s going to jail.  I kind of think if, although as I said you can’t prove it, the idea that this election was influenced illegally by these rogue IRS agents doing this is really upsetting.  I think that’s where the anger is genuine.  Did the Obama administration, not directly by all accounts, but indirectly limit the ability of the American public, through these groups that are legal, to have their opinions spread throughout the country.  Was that limited and therefore did it change potential election results and therefore allow more Democrats — as you said, there are no Constitution groups on the left.  It’s all on the right.

Mike:  Why aren’t there?

Mike:  That’s a really good question, isn’t it?  You were able to single these groups out because they said they wanted to promote and preach the Constitution.  Does that mean that only one side of the aisle wants to preach, protect, and defend the Constitution of the United States?  Again, to me, the entire – going all the way back — you know the genesis of this, right?  McCain-Feingold is the genesis of this entire disaster, this entire debacle.  Is Congress trying to write rules that both partisan sides could agree to so that they would both be able to have their groups, which would be able to raise substantial amounts of funds, be able to offer the people that are going to donate to them significant tax advantages — this is the point.  The 501(c)(3) enables the group to raise money, and it confers on the donor a certain tax advantage.  You are gaining an advantage by this.  This is all about, again, political partisan patronage, and about who it is that’s going to divvy up the spoils.  This goes all the way back to the McCain-Feingold campaign finance laws.  Folks, if you don’t have an income tax code that’s 800 bajillion pages long, you probably don’t have any of the things that we currently have, the PACs and the political action process.  None of this exists.  It all exists because government is writing its own rules.  The federal government and its agencies and the congress are writing rules that benefit mightily the two parties at the expense of the American sheeple.  That’s how I would term all of this.

If you really want a solution, if you’re really looking for a radical way to deal with this latest scandal, instead of screaming and hollering at Obama and the IRS, which you’re going to do anyway.  You’re always going to protest mightily against a tax collection agency.  If you really want something to sink your teeth into, ask the question of why.  Why was all this necessary?  Why was McCain-Feingold necessary?  It was to make it so that both sides understood the rules, so that both sides would have a set of rules they could legally turn to and say: See, see, we abided.  We can raise that money.  At the end of the day, you are conferring mighty tax benefits on very wealthy people to participate in the political process.  When you go to vote, you don’t get a tax write-off for the gasoline you spend to drive to the poll, do you?  Let me make an analogy.  Mr. and Mrs. John Q. Public when they go vote have no tax incentive and are receiving no tax incentive, unless they are voting directly on a tax.  Contribute to a 501(c)(3) that’s influencing the political process, if you are a wealthy donor, and you are attaining and being conferred a tax advantage, plus you get to participate in the process.  You ever heard the old saying “The rich get richer and the poor get poorer”?  Well, the elite get more powerful and those who aren’t elite are just the unwashed hoi polloi peasant masses out here. 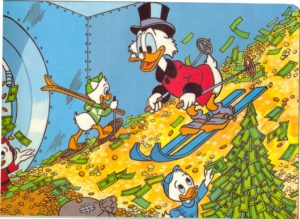 0Shares
big governmentclaes rynconservativedecepticondemocratelectionelitesIRS scandaljacobinMcCain-Feingoldneoconnon-profitpartisanshipparty politicssuper pacsupreme courttaxesTea Party
Previous PostThe Power Genie Is Out Of The Bottle And Running Amok In The National GovernmentNext PostWhat Would Patrick Henry Say About Swarms of IRS Agents? This…