Mandeville, LA – Exclusive Transcript – “More on the Great Siege of Malta, which began on the 18th of May 1565.  This is a story that I got from one of the finer historically-accurate websites that publishes stories of the Crusades and of crusaders.”  Check out today’s transcript for the rest….

Mike:  More on the Great Siege of Malta, which began on the 18th of May 1565.  This is a story that I got from one of the finer historically-accurate websites that publishes stories of the Crusades and of crusaders.

If it had not taken place, the Great Siege would no doubt have been dreamt up for the screenplay of an epic film. Few other historic episodes rival it for sheer heroism, the bloodshed of war and military strategy. Voltaire is quoted as saying ‘rien est plus connu que la siege de Malte’ (nothing is so well known as the Siege of Malta).

The story of the Siege is interwoven with the tale of two adversaries, the ageing Grand Master Jean Parisot de la Valette, and his contemporary, the Barbary corsair Dragut Reis who commanded the fleet of Sultan Suleiman the Magnificent. It is also the story of thousands of lives of Maltese Islanders, men at arms to the Knights of St. John.

The years leading up to the Siege saw the Islands under constant threat from the Ottoman Turks. In 1551, the Ottomans carried out an audacious raid, which saw most of Gozo’s population captured and taken into slavery.

Mike:  For those of you who think we’re the first people to ever suffer beheadings and capturings and all the other atrocities that ISIS and Hydra and S.H.I.E.L.D. and all the rest of these jihadi madmen are perpetrating, you’re just wrong.  We’re not unique.  Just because we’re Americans, just because we’re Western, [mocking] “They hate us for our . . . .”  No. 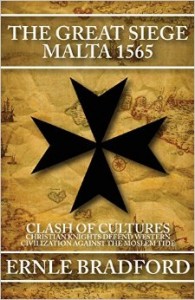 In 1559, the Knights responded, but with a disastrous attack on the Ottoman stronghold, Djerba, on the Tunisian coast.

The Knights knew they were vulnerable in Malta despite the harbours and their two forts, St. Angelo, in what is now Vittoriosa, and newly-built St. Elmo, on the open peninsula of Mount Sciberras overlooking the harbours (later known as Grand Harbour and Marsamxett Harbour).

Grand Master La Valette had done his best to build defences and had requested extra forces from the Emperor Charles V, the Pope and the Viceroy of Sicily.

But no help came. In May, 1565, a vast Ottoman fleet, some 40,000 men, lay siege to the Islands. The Knights were heavily outnumbered with a mere 700 or so men and around 8000 Maltese regular troops. The Islanders took refuge in the fortified towns of Mdina and Birgu (Vittoriosa) destroying crops and poisoning wells as they fled.

The Ottomans first decided to attack isolated Fort St. Elmo, on the Sceberras peninsula, because of its commanding position between the two harbours. Repeated assaults were launched over 36 days, but the small garrison of Knights held on to the fort for far longer than Suleiman’s men anticipated. After four weeks, they finally overran St. Elmo but at a heavy price: the loss of 8000 men. The Turkish commander Dragut was fatally injured during the taking of St. Elmo. Under his co-commander, Mustafa Pasha, the Ottoman troops now had St. Angelo in their sights.

It is the battle for St. Angelo which saw some of the bloodiest episodes of this Holy War. It was to the basis of legends for centuries to come. Mustafa Pasha was to launch some 10 attacks on the walls of St. Angelo and the fortified Three Cities throughout the long, hot summer of 1565. Even on 18th August, when a huge part of the defences were breached, the Ottomans failed to take the Fort. Vallette himself had even entered the battle fray and despite the uneven odds for success, he had refused to accept the Ottoman’s terms of surrender.

Mike:  So they took St. Elmo and then they started battering St. Angelo.  They couldn’t take the fort of St. Angelo.  You just have to understand here, these Christian knights, and the regulars – by the way, the island of Malta at the time was a Catholic island and it still remains under a Catholic-based government today.  That’s all they had to defend, maybe 8,000 men.

I just love this part of the story.  If you want an episode of carnage that is as violent and vicious yet savory as that which the murderous jihadis have visited upon orange jump-suited Christians on the beaches of Libya, on the sands of Syria and Iraq, what happened was Vallette, the commander of the Knights of St. John, in the battles of St. Elmo and St. Angelo, hand-to-hand battle, members of the Turkish Army were captured.  They were taken up to a prison.  Well, there were also members of the order of the Knights of St. John that were taken.  One of the sieges of St. Angelo, the pasha ordered the execution of those knights.  They were prisoners of war.  They were supposed to be treated as prisoners of war.  They weren’t treated as prisoners of war.  The Muslims don’t acknowledge these treaties.  They conducted their affairs as they wanted to conduct them.

What Vallette did then, as Mustafa Pasha was getting closer and closer to St. Angelo, as he ordered the Turks he had in captivity, he tried them, found them as spies, enemies of the state, and they executed them.  They beheaded them.  Mustafa Pasha just could not believe the Maltese wouldn’t surrender.  He couldn’t believe it.  And he wasn’t going to go back to Suleiman and tell him: Yeah, dude, we pounded that fort, but those guys were a match for us.  He ultimately did and Suleiman had him executed.  Actually, he would execute him after they lost the Battle of Lepanto, too.  They went back and tried this again several years later at Lepanto, and Pasha was ultimately killed by Don Juan.

So they took the heads of the Turks – some of you will appreciate this – they stuffed them into their larger canons and they fired them on the Muslim ships.  The Turks were just shocked.  They couldn’t believe it wasn’t cannonballs that were hitting the ships.  Instead, it was the heads of their fallen comrades.  That’s the part of the story that’s being described here that I’m reading to you today.

At one point in the battle, the Ottomans floated the headless corpses of captured Knights across Grand Harbour. The act was returned in kind: Vallette ordered all Ottoman prisoners to be executed and their heads used as ‘cannon balls’ to fire back toward their compatriots in St Elmo.

By September, the Ottomans were concerned about having to remain in Malta during the winter, and their morale began to ebb. At this point, Vallette’s long-awaited relief forces appeared at Mellieħa Bay and took control of high ground inland. Almost trapped, the Ottoman troops retreated, but not before losing thousands more men.

The Great Siege ended on 8th September, commemorated today with a public holiday, il-Vitorja. The epilogue to the Siege was twofold: the Knights of St. John in Malta had seriously diminished the power of the Ottomans. And Malta’s magnificent capital, Valletta, was founded by and named after Grand Master Jean de la Valette. Valletta was to be not only a fortress city, but the cultural home to some of the finest works of 16th – 18th century Europe. Vallette himself was buried in the city some three years later.

KD,
What is “one of the finer historically-accurate websites that publishes stories of the Crusades and of crusaders”? There are so many sites and I hate to reinvent the wheel.