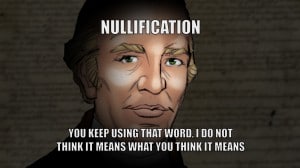 “The cases, however, Mr. Ruffin said, were extremely different. Congress alone could determine upon war or peace : consequently, alien enemies were proper subjects for congressional legislation : but that alien friends were exclusively subject to the sovereignty of the several individual states ; as the twelfth article of the amendments to the Federal Constitution expressly declares, that ” the powers not delegated to the United States, by the Constitution, nor prohibited by it to the states, are reserved to the ‘ states respectively, or to the people.” And as at the same time, he said, the only power given by that compact to the general government, over alien friends, was in the ninth section of the first article, it must follow that this was one of the rights reserved to the states. The gentleman last up, he said, had contended however, that this power was rightfully exercised by Congress, and had taken the broad ground of construction and implication, upon which to erect his fabric. Construction and implication, Mr. Ruffin said, was a doctrine which he had hoped was banished from the councils of America. It was a doctrine which the people of America had unanimously and uniformly protested against. It was the exercise of this kind of right by the British parliament which involved us in a war with that government. It was to guard against the exercise of such a power, that the state constitutions were formed : and it was that abhorrence in America to constructive and implied rights, that induced the specific de- lineation of congressional powers.”