Mandeville, LA – Exclusive Transcript – Again, I fail to see why anyone that participates in, advocates for, and has been dreaming about shrinking the federal leviathan, why you are not taking the chance or the opportunity to hit the ramparts, to dig yourself in, and to encourage those that have a vote or say-so in this to hold the line.  Folks, this is the battle we’ve all been waiting for, isn’t it?  What did you think it would look like?  Check out today’s transcript for the rest…

Mike:  $777 billion is what borrowing money on the credit of the United States cost the people of this union in the fiscal year that ended on September 30, 2013.  For those that say [mocking] “It’s only another billion dollars, only another trillion dollars, what’s $1 trillion between friends?”  This is what Harry Worthless Warbucks Reid is telling the media and television reporters, [mocking] “Look, we’re only asking for the debt ceiling to be increased by another trillion.”  That means there’s another trillion dollars you have to pay interest on every year because some of the new borrowing authority will be short-term loans and some of them will be long-term loans.  By the bye, there’s one more facet to this, to these kooks out there saying if we don’t raise the debt ceiling our credit rating will go down. That’s not true.  When we raised the debt ceiling in 2011, Moody’s downgraded us.  The credit rating went down the last time there was a major bump in the debt ceiling, or one of the last two times.

Again, I fail to see why anyone that participates in, advocates for, and has been dreaming about shrinking the federal leviathan, why you are not taking the chance or the opportunity to hit the ramparts, to dig yourself in, and to encourage those that have a vote or say-so in this to hold the line.  Folks, this is the battle we’ve all been waiting for, isn’t it?  What did you think it would look like?  This is what I say to my friends at The American Conservative: Please explain to me in your next editorial, Mr. McCarthy and Mr. Larison and Mr. Galupo, what in the hell did you think shrinking the size of government would look like?  Do you really think it’s going to happen in an orderly fashion and there’s going to be some plan like the Canadians had?  Ha ha ha!  And there’s going to be a date certain when the  progressives in this country and the Republicans that are progressives — don’t forget the Republican spending priorities are just as uncivil and just as unconstitutional as the Democrats’ spending priorities. It’s just the Republicans want to spend the money with the military-industrial complex instead of spending the money in the welfare distribution spending complex.  Both parties spend the money that we don’t have in corporatism or through corporatism, subsidies and what have you.

There’s an article at Forbes Magazine posted by Jeffrey Dorfman October 3, “Don’t Believe The Debt Ceiling Hype: The Federal Government Can Survive Without An Increase.”  I have to go to Forbes Magazine or LewRockwell.com to find sanity.  I would read you the narrative here, but he gets into some nuts and bolts.

To begin with, the interest on the national debt must be paid. I will budget $240 billion for that.

Mike:  Remember, last hour I read you the parts of the Constitution that require the Congress and require the president to execute their oaths of office.  They are required to repay the debts of the United States.  That is a requirement, not an option.  That’s why we have a Constitution, thus why we have a Congress to start with.  In other words, there is not going to be a default.  They are required to do it.  If the president allows the country or the union or the Treasury Department to miss a debt service payment, he should be immediately brought into the Senate, immediately brought up on charges of impeachment in the House, and Harry Reid ought to convene an impeachment hearing, and John Roberts ought to sit in on it and he ought to be impeached, simple as that.  Send a message to Biden: If you don’t pay the debt service, which you are constitutionally required to do, we’ll impeach you, too.  You’re next.  Then if John Kerry is then president, third in line, if you don’t do it, we’ll impeach you.

Just as predicted, ladies and gentlemen — I hate being right all the time, I really do.  Back in May of 2010, I told you on this radio program and on the website at MikeChurch.com and in various other forms that Obamacare or the Affordable Care Act would ultimately lead to a constitutional crisis.  I’m not quite sure I was envisioning this, but we are in a constitutional crisis.  The Congress, by constitutional statute, must repay the debts of the United States, not optional.  They’re going to.  Anyone that says they’re not, what do you do when you have a clear dereliction of duty?  You impeach.  Let me ask you members of the House of Representin’ that listen to this show: Are you prepared to bring impeachment charges against the president if he fails to execute the statutory authority you’ve already granted him to order the treasury to make the debt payments?  They have the money.  Are you prepared to ask the United States Senate to begin proceedings using their own rules against the majority leader of the Senate if the majority leader of the Senate fails to bring to a vote a continuing resolution or an appropriation that will repay the debts or pay the interest payments?

These are constitutional questions here, ladies and gentlemen.  The people out there saying [mocking] “It’s time to throw the Tea Party into Mount Doom.  It’s time to end this.  We’re going to default.”  We’re not going to default, and if we do, then people are going to be responsible, and they should be held accountable.  Again, I ask the question.  Send me an email if you can’t get through on the phone lines, [email protected]  The Twitter feed is mortis, dead, other than our buddy Lee in Wyoming, who is up every morning and tweeting.  Exactly what did you think the confrontation over, I’m going to quote you conservatives out there, “shrinking the size and scope of government,” what did you think it would look like?  What did you think the battle would look like?  Are we not up to the task here?  For crying out loud!  In any event, Dorfman has listed here in his post at Forbes Magazine, you take the $240 billion that you’re going to appropriate to pay the interest on the debt this year.  Actually, it’s going to be more than that, as we just learned.  Next, social security payments should run about $860 billion.  You go ahead and do that.

Holding Medicare spending to about its fiscal year 2013 total and making some small cuts to Medicaid and other health spending would keep health care spending by the government to $860 billion. This does not include additional spending for the Affordable Care Act.

Veteran’s benefits will cost another $140 billion if we leave it unchanged. Department of Justice programs and general government functions add another $83 billion if their spending levels are held roughly constant. We can save some money by cutting science funding to $10 billion and international affairs spending to $13 billion which is enough to operate the State Department and embassies, but not pay foreign aid. This takes total spending to $2.2 trillion.

Cutting spending on conservation programs in half and paying only for agricultural research programs (no more farm subsidies) would cost $25 billion. Some moderate cuts to transportation spending bring it to $90 billion. Slicing education spending in half would reduce it to about $40 billion. The total for annual spending is now $2.36 trillion.

That leaves only about $300 billion for defense spending. However, employee contributions to the retirement plan and some miscellaneous offsets that the government does not count as part of the $3 trillion in revenue expected next fiscal year bring in $90 billion per year. That means we can spend about $400 billion on defense and still have a balanced budget.

Mike:  In other words, there’s actually a way to get there from here with current, out-of-control, reckless spending priorities.  Folks, did you notice that between social security and medical wealth transfer payments it cost $1.72 trillion dollars per year just for social security and what we’re already forking out in unconstitutional wealth transfer payments in the form of Medicare and Medicaid?  I don’t have any quibble with the veterans’ benefits, veterans’ healthcare, none of that.  That, to me, is a priority.  There is no lockbox for social security.  None of the money that you people put in, including myself, that are of retirement age, it’s all gone.  It’s all been spent.  Years and years if not decades ago that money was spent.  The prudent and wise thing to do in this instance would be to agree to sunset the program, make a commitment to those that are already retired and cannot alter the trajectory of their retirement.  We’re going to make the payments to you and we’re going to find a way to fund that but no one else.

Again, what did you think — if you want to talk politics and government all day long till we’re blue in the face, let me ask the question yet again that I do not have an answer to: What did you think shrinking the size and scope of the government would look like?  What did you think the first battle would be?  Are there those out there that are actually naïve enough to believe that if you just elected the right group of Republicans that they would get in there and do this?  Didn’t they have the chance to do this in 2001, 2001, 2003, 2004, 2005 and 2006?  The last Congress to take a stab at this was when it was led by Congressman Gingrich back in the 1990s, and that was only because there was what was called the peace dividend.  There was an agreement that bases had to be closed and that Pentagon spending had to be reduced.  That’s what led to those balanced budgets.  Why can’t that be done again? 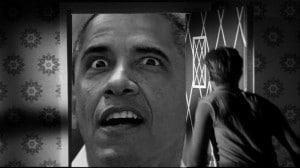 Well Mike, I have to tip my hat to you on this transcript. Good stuff. I shared it within my social networks and have tweeted these points to Boehner and company.

I completely agree, and I’m an employee of a government contractor.
If the government shrinks and confiscates less money, that would then free up money in the market for entrprenures and businesses to pay what would be the former government contactors.
The period inbetween would not be comfortable but the latter period of market based industrialism would be worth the pain.