Interview with Andrew Bieszad on the all new CRUSADE Channel

Mike:  Seven hundred, eight-one years to drive out the Muslims.  The important part about the Spanish driving the Muslims out is that the Spanish never wavered in their Catholicism or Christianity, did they?

Bieszad:  Correct.  That is the deciding factor in that – look at all the nations that have contended with Islam.  The only nations who have ever been able to, I’m just going to say it, to stand up to the Muslims, to prevent themselves being completely overrun, they’re either the Catholics or the other Apostolic Christians.  When I say Apostolic, I’m referring to the Assyrian Church of the East, the Oriental Orthodox and the Eastern Orthodox.  If you mean actually defeat the Muslims and run them out of the country and reconquer it, the only ones who have been able to do that are the Catholic countries.

Mike:  The only ones.

Mike:  It’s the Mike Church Show here on the Veritas Network and the Crusade Channel.  Get this show live every weekday morning from 8 to 11 a.m.-ish – I say “ish” because we may not be done at 11:00.  If we’re not, we just keep going.  You can also get it on demand when you want and where you want.  All you need is a Founders Pass.  Please consider becoming a member at MikeChurch.com and supporting our efforts.  Without you listening and without your subscription support, the network cannot grow, nor can it survive.  Thanks to all of you who have already done so.  Andrew Bieszad, author of Lions of the Faith and our resident Islamic expert is on the telephone line with us, on the Dude Maker Hotline.

and I’ll ask you the same question here on the Veritas Radio Network and Crusade Channel.  You said that if the Christian people of ‘Murica want to really go to battle with and want to attempt to vanquish Islam and vanquish the Mohammedans from America, then they’re going to have to convert.

Bieszad:  They’re going to have to convert at the very minimum.  That is one of their only – there are only a few ways that you can –

Mike:  Tell them what they have to convert to.

Bieszad:  They have to embrace the Catholic faith.

Mike:  This is where we’re going to run into a problem.  There are things that Protestants and Catholics do agree on, usually issues of life, abortion and euthanasia and things like that.  On this, you’re not going to get the cooperation because they’re going to reject Our Lady out of pocket.  I guess in doing so, they also reject out of pocket that the Battle of Lepanto, that the Siege of Malta and Siege of Vienna were all –

Bieszad:  The entire Reconquista began with [??] Asturias placing a statue of Our Lady in a cave of Covadonga and saying: Please see to intercession.  It was him and a small army, or his small band of ragtag soldiers, that routed the entire Muslim army and drove them out of Asturias.  That began the Reconquista.

Mike:  There’s also the story of Cortes.  When Hernan Cortes goes to what is today Mexico and confronts the devil-worshipping, human-sacrificing Aztecs and Mayans, he too calls upon the intercession of Mary.  When he has to take the city of – I can’t think of the name of it. 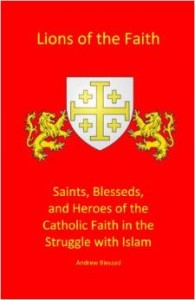 Mike:  It’s where the giant pyramid is where they’re sacrificing the humans and cutting their –

Mike:  Okay.  It’s surrounded by a giant lake.  The only way to get to it is you’ve got to cross these causeways.  He’s seriously outnumbered.  He’s outnumbered 800 to 1 or something like that.

Bieszad:  Yeah, it was ridiculous.

Mike:  He calls upon the intercession of Mary, of Our Lady.  We know the rest of the story, that the entire geographic area known as Mexico today, which was populated by the Incans, by the Mayans, and by the Aztecs – some people would say, [mocking] “There weren’t Incans there at the time.”  Well, they used to be Incans.  And if there weren’t Incans there, they were the descendants of the Incans.  They were converted to Catholicism.  Our Lady of Guadalupe ultimately appears to St. Juan in the early days of this and we still have Our Lady of Guadalupe’s Tilma, which has baffled every scientist that has looked at it.  They’ve tried to disprove it.  Every time they try to say it’s a fake and the Mexican government gives them permission to send a research team down there to look at it, they discover some new miracle in it.  Anyway, how do we negotiate this impasse with our Protestant brothers and sisters when it comes to calling upon the intercession of Mary?

Bieszad:  Many of them will work in their [??] fields of what they do, but the fact is that we have to lead.  That is the end story.  We have to lead.  There were cases many times of Orthodox and Protestant going to fight with the Catholics against the Muslims.  However, at the same time – I’m going to say this here because this is not going to be very popular.  The fact is, I have to speak truthfully.  Protestantism, no matter how well you put it, there is, we don’t like to use the H-word today, but they do have incorrect teaching, that is, heresy.  The fact is, heresy will always be swallowed up by Islam.  It always does.  It always happens.  Even St. John of Damascus and [??] both living around the year 750 and 1100 respectively.  They both wrote that: What do they call Muhammad?  They said Muhammad was the heresy arc of heretists.  All heresy is perfected within Muhammad.

This is why all Christian heretics eventually convert to the Catholic faith or they end up becoming Muslim when confronted with Islam.  Bosnia is a perfect example.  Bosnia was in the midst of a heresy on its Bogomilism.  What happened in Bosnia?  Many people became Catholic; the rest of them became Muslim.  It’s still Muslim today.  Bulgaria, most of Bulgaria’s Muslim population comes from the fact that, again, you had this Bogomil heresy.  Some of them went back to the old faith; the rest of them just embraced Islam.  That is what will happen.  People [??] alliance is the issue with Muslims and Protestants.  I suggest you look into what’s called the Turco-Calvinistic Alliance.  I wrote about it in my book.  There were actually medals that were produced by the Dutch army that they would use when going into battle against Spain and against other Catholic countries.  It was the shape of a crescent moon.  It actually would say on it “Better a Turk than a Papist.”

Mike:  Better a Turk than a Papist?

Bieszad:  Look it up.  You can find some of these medals in the Rijksmuseum in Amsterdam.  It actually shows the crescent moon, “Better a Turk than a Papist.”  The phrase was actually coined by a Calvinist preacher named Herman Moded [ph].

Bieszad:  Herman Moded, also known as Herman Distreeker [ph].  He was one of the early Calvinist preachers of the 16th Century.

Mike:  I did not know that.  Our final discussion here will be about the various military options that are going to be offered here.  I’ve been watching Fox News and the Clinton News Network all morning long since I got here at about 5:45 am.  I can tell you, I have yet to see a priest.  I haven’t even seen Pastor Rick Warren.  I have yet to see a person of faith anywhere on any of these shows talking about anything other than bombing Muslims, bombing ISIS back into the first millennia.  It’s obvious that the response to this is going to unfortunately be secular.  It’s going to be secular.  It’s going to be military.  There’s not going to be any faith attached to it.  What do you think ultimately happens with that?

Bieszad:  I will tell you this.  Again, you emphasized secular military option.  The fact is, that is like putting a bandage on an infection.  It will stop something but it will not eliminate the problem.  The problem is Islamic theology itself.  You want to know what to do?  I will tell you what you have to do.  It’s very simple, the answer, but it requires effort, and it is not going to be easy.  The first one, obviously the best one, is people must work to convert these Muslims.  They have to be converted, as many of them as you can.  That is the first and the best way.  The other two options, they’re not good, but they’re also the ones that work.  You either have to expel them from the country, which is what happened in 17th century Spain.  They expelled the remaining Muslims from Spain.  Islam ended in Spain at the end of the 15th century, but it was not actually permanently wiped out until the 17th.  Many times they almost became Muslim, even when it was conquering the Americas.

The other option is you have to go for a long-term war with them.  When I say long-term, we’re talking 500, 600, 700 years.  I can tell you, the secular Europeans do not have the desire, nor do the secular Americans, the desire, the will, or the motivation to fight such a long-term war.  We would rather just turn over and die because it’s the easier option.  I hate to say that but that’s the truth.  The fact is, if you want to survive against Islam – Islam is in the battle for the long-term.  You’ve got to be committed to this or you’re going to become one of them.

Have you been missing The Mike Church Show from SiriusXM?  Well where have YOU been?  Click the link provided and being listening NOW!

Bieszad:  It’s like I said in my [??] by OnePeterFive.  You’re either going to fight for the faith or you’re going to submit on your knees.

Mike:  That’s Andrew Bieszad, author of Lions of the Faith.  It sounds like, what you just described, I was having a Star Trek moment.  That sounds like the Borg.  You will be assimilated.  There’s no resisting the Borg.  Either you become a Borg or you resist the Borg and die trying to resist the Borg.

Bieszad:  Yes, that is what it is.  That’s what Islam’s goal is.  [Arabic]  “I have been commanded to fight against mankind until he professes that there is no god but Allah and Muhammad is his prophet,” from the Haditha Bukhari.  I think Muslim has that quote as well.  I t is one of Muhammad’s sayings that he told to his followers.  What did Muhammad say?  [Arabic]  “Verily, paradise is under the shade of swords.”  What was Muhammad’s greatest goal that he set?  He said his greatest goal is that he should die in jihad to come back again, only to die in jihad again, to come back and die in jihad again.  It is perpetual war.  People say Islam means peace.  It does not mean peace.  The Dar al-Islam, the house of peace, only comes with the Dar al-Harb, the house of war, when all the non-Muslims of the world have been either destroyed or converted to Islam.