Mandeville, LA – Church Doctrine – How’s this for the tag line of the next edition of TV’s latest “reality show”, “[t]hey sent me to prison for life but I came back with a good looking wife”? It is no joke that the sheer amount of infamous celebrities this country produces would make identifying this quote’s author nearly impossible so let me add “ex-governor” and “ex-con” to the mix. Well, that gets us closer but Rob Blagojevich fans will be disappointed to learn that Edwin Edwards landed the plum role with newest wife Trina. The Governor’s Wife will debut next Sunday night on A&E and judging by the trailer, won’t be winning any Emmy awards but I can see it finding a “cult following” among our debauched citizenry.

After all American anti-cult has elevated obese dance instructor’s with bullhorns for mouths, “little people” and the soul-less Kardashian clan to mega-star level, why not an 86 year old, Viagara popping ex con/governor!? But there is something even more disturbing about Edwards and his newfound “fame”. When our statesmen of old aged on, they usually did so while in office or working with those in office but rarely in infamy.

James Monroe at the tender age of 71 was elected to attend the second VA constitutional convention of 1829 with 78 year old James Madison. Louisiana’s own Jimmie Davis lived to 101 years old before passing away without ever having been sent to prison and remains as famous for “You are my Sunshine” than for any accomplishments while serving 2 terms as governor. Davis lived out his 70’s and 80’s by singing in Churches, the last place one would expect to find almost any governor today unless they were exchanging their 4th or 5th set of wedding “vows”.

Will The Governor’s Wife be a hit? I can’t answer that but I can quote H.L. Mencken who famously said “Nobody ever went broke underestimating the taste of the American public.” I’ll say, just ask Honey Boo Boo. 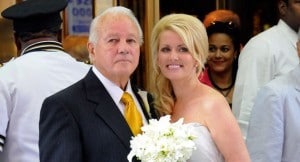