Mandeville, LA – Exclusive Transcript – You can’t have a conversation about Libya, in my humble estimation, without having a conversation about the abuse of executive power and about the dereliction of duty on the part of the members of the House of Representin’ and the Senate who no longer conduct any foreign policy and who no longer can even bring themselves to vote on whether or not we ought to be declaring war against people in lands in faraway places.  The Gulf of Tonkin Resolution is the fountain from which most of this springs.  Check out today’s transcript for the rest…

Mike:  There is something to be said for this pickle being created by those who are so passionate about making war and about policing the affairs of the entire known universe.  I was reading last night Glenn Greenwald’s post about it’s time to reauthorize the AUMF, the Authorization for Use of Military Force, which was first voted on on or around September the 14, 2001.  There was only one vote — it was 434-1 in the House of Representin’ for the AUMF at the time.  It was voted against by Congresswoman Barbara Lee of California.  Ron Paul, interestingly enough, who was in the House of Representin’ at the time, actually voted for the AUMF.  As he explained it later, he was voting for an authorization for the president if the perps could be immediately found.  He was voting to authorize the president to discharge his commander in chief duty as the Congress had authorized retaliation against whoever it was that had brought the Twin Towers down and bombed the Pentagon and attempted to, we believe, fly a plane either into the Capitol or into the White House.  So that’s what the AUMF vote was about in 2001.  Barbara Lee was the only one who voted against it.

In her reasoning for voting against it, she cited that in 1964, a senator by the name of Wayne Morse — there were two members of the United States Senate that challenged then-President Lyndon Baines Johnson.  Lyndon Baines Johnson wanted to go to war in southeast Asia.  Those of you that are Vietnam vets, you know this story all too well.  This is known as the vote on the Gulf of Tonkin Resolution.  Two senators voted against the Gulf of Tonkin Resolution.  One was Wayne Morse.  This was a vote that basically came down to loyalty to the president and to the idea that the Congress can transfer its war-making authority to the executive branch.  This was a very dangerous thing to do.  It is one of the events that unleashed this expansion of executive power that President Obama, and President Bush before him, abuse today.

You can’t have a conversation about Libya, in my humble estimation, without having a conversation about the abuse of executive power and about the dereliction of duty on the part of the members of the House of Representin’ and the Senate who no longer conduct any foreign policy and who no longer can even bring themselves to vote on whether or not we ought to be declaring war against people in lands in faraway places.  The Gulf of Tonkin Resolution is the fountain from which most of this springs.

I’m browsing around last night and I said: Self, do what you always do when you’re analyzing these things and preparing them for the airwaves.  Let’s go to sources.  I found four references to Barbara Lee’s speech.  There are about 50 million of the out there, but I found four that were credible, one at Yale University’s Law Department.  They keep a very, very robust library of public works at the Avalon Project at Yale.  I found Lee’s speech at the Avalon Project thinking she would have footnoted where she got the quote from Senator Morse to oppose intervention in Libya.  In her speech, Lee quotes Senator Morse.

“In 1964, Congress gave President Lyndon Johnson the power to ‘take all necessary measures’ to repel attacks and prevent further aggression. In so doing, this House abandoned its own constitutional responsibilities and launched our country into years of undeclared war in Vietnam.

“At this time, Senator Wayne Morse, one of the two lonely votes against the Tonkin Gulf Resolution, declared, ‘I believe that history will record that we have made a grave mistake in subverting and circumventing the Constitution of the United States. I believe that with the next century, future generations will look with dismay and great disappointment upon a Congress which is now about to make such a historic mistake.’

“Senator Morse was correct, and I fear we make the same mistake today.”

Mike:  She was speaking on the 14th of September 2001.  This is immediately in the aftermath of the attacks on September 11th.  War fever was running high.  I started looking this up and here’s what I found about Senator Morse.  He’s got his own center for law and politics erected in his honor.  From his own bio, “Morse was staunchly opposed to communism, even approving the use of military force to repel it when necessary.”  What I’ve done here is I tried to find the source.  Where did Barbara Lee get the quotation from Senator Morse?  I still have not been able to find it.  However, I do have an interview he conducted shortly after the vote where he pretty much says the same thing, not verbatim, but pretty close.  We’ll get to that in just a moment here.  So back to Morse’s biographer’s statement about why he opposed the Gulf of Tonkin Resolution.

The Gulf of Tonkin Resolution has become one of the most debated topics in U.S. post-war foreign policy. The resolution allowed President Johnson to engage U.S. troops without a formal declaration of war, in response to an alleged attack on a U.S. ship as it patrolled the foreign waters of the Gulf of Tonkin. The apparent attack on U.S. forces threw even the most reluctant members of Congress into a defensive position.

Mike:  There’s that word again.  Why do I keep hearing constitutional grounds? I’m trying to make the case here that the tragedy of Benghazi was only brought about by ignorance and dereliction of duty and a breaking of the oath of office by members of Congress and the Senate, and certainly the president, when it comes to foreign policy and when it comes to what the president was allowed to do with our forces in Libya.  He should have been kneecapped back in March and April of 2012.  Instead, Congress just sat there and did nothing.  If anything they cheer-leaded him on.  McCain and company are going, [mocking] “Yeah, yeah, get in there!”  This was all made possible by the expansion of executive powers to make war beginning in the 1960s.  Of course, Lincoln had a hand in this as well.

Mike Church Show Audio: Community Is The Most Effective Tool For Fighting Terrorism

The Constitution establishes the President as commander-in-chief of the armed forces, but to balance and check this power the Constitution invests Congress with the power to declare war.

When the resolution passed, Morse declared that Congress had surrendered its authority, and therefore the authority of the people it was elected to serve. Morse also deplored the open-ended nature of the approval and condemned Congress for giving the President and the military a “blank check” which would be cashed with taxpayer’s money and citizens’ lives.

Mike:  And boy was it!  Of course Vietnam raged on unsuccessfully executed all the way until Richard M. Nixon managed to end our role in the conflict.  Tens of thousands of young Americans’ lives were lost.  Hundreds of thousands if not millions of Americans’ lives were adversely impacted by this unbelievable expansion of the executive power that was granted to President Johnson.  Now that we know a little bit about the backstory, here’s what Senator Wayne Morse said the day after the vote on the Gulf of Tonkin Resolution.  I think you’ll find this most interesting.  Let me ask you, where is the member of the United States Senate that has this kind of devotion to his oath of office and to the literal meaning and traditional implementation and use of the Constitution, especially when passions are aroused and men are more predisposed to acting?

Senator Wayne Morse: Being in the minority never proves that you’re wrong. In fact, history is going to record that Senator Gruening and I voted in the interest of the American people this morning when we voted against this resolution. And I’d have the American people remember what this resolution really is. It’s a resolution which seeks to give the President of the United States the power to make war without a declaration of war.

Mike:  You hear that?  Sounds like it’s coming from an echo chamber from the past, “seeks to give the President of the United States the power to make war without a declaration of war.”  It still exists today and that’s why you have the incident in Benghazi.  No one wants to talk about the actual source.  Instead we’d rather demagogue and scream and holler, point fingers, red versus blue, conservative versus liberal, Republican versus Democrat, left versus right, sides of the aisle.  So much is being accomplished, by the way, to bring this to an end after these hearings.  I feel so much better about this today.  How about you? 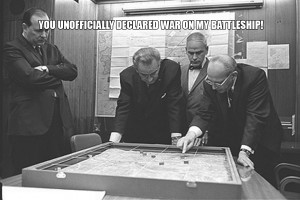 0Shares
9/11AUMFauthorityBarbara LeeBenghaziCongressConstitutionexecutive orderforeign policyGulf of TonkinLibyaLyndon JohnsonmilitaryunconstitutionalvietnamwarWayne Morse
Previous PostThink You Can Get Out Of Paying Taxes By Renouncing Your U.S. Citizenship? Guess Again.Next PostDr. Eric Helps Us Unravel The Web That Is Medicare And Medicaid