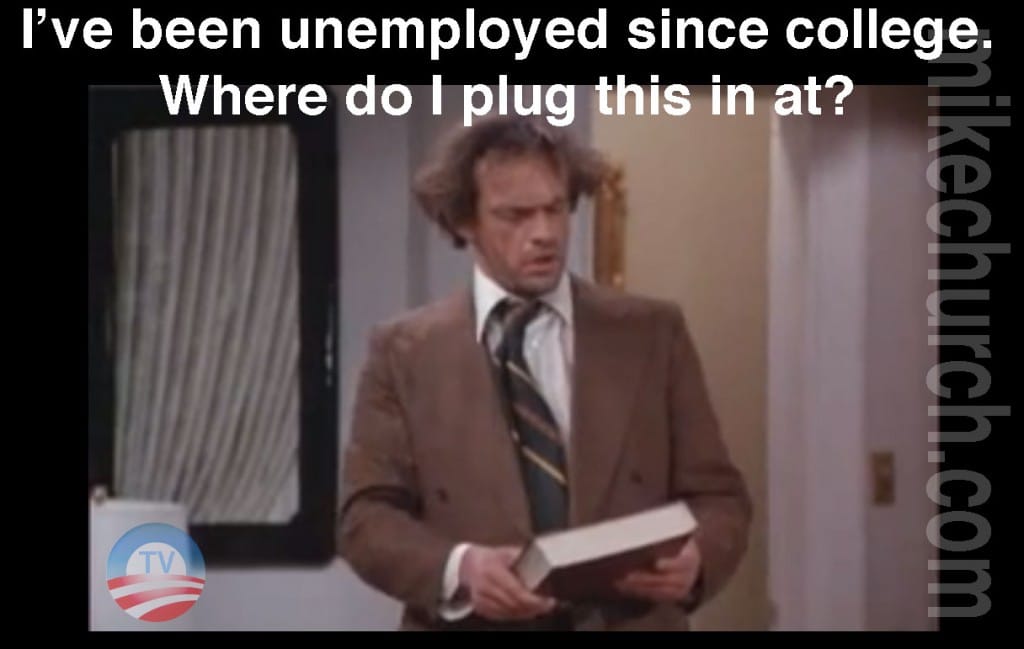 Mike:  I have a couple of stories here and a couple of points to make on this.  The first point that I think anyone should make in any of these discussions is: If you say that this is something we all must do in the spirit of charity, and in the spirit of helping our fellow man gain a rung up on his or her problems, if you make that argument and you make that case, people ought to be of the opinion that they will willing fund this endeavor with their own money or with a portion of the fruits of their labor.  Whether you like it or whether I like it or not, this is partially being funded with the fruits of our labor.  As this discussion unfolds in front of your very ears here today, also bear this in mind: We’re in year five now, count them, five of an alleged and purported recovery.  Where are the jobs?  You want me to tell you where the jobs are, folks?  You just heard the Mike Church Show Band from our greatest hits collection, the anthology.  Go download it as soon as the show is over today in the Founders Tradin’ Post at MikeChurch.com.  Let me tell you where the jobs are: trades, skilled.

I watch with great humor these television commercials that appear during sporting events, because that’s really the only time I suffer broadcast television and the commercials that go with it.  Everything else I record.  Unless it’s a live sporting event that I want to watch, I rarely, rarely watch broadcast TV.  I just can’t stand it.  In the rare instances that I do watch it, like many of you, you see television commercials.  I just chuckle and laugh.  If I’m watching the show

with someone, I’ll usually make some wisecrack about: Um, we just watched this commercial where all these people were in this office building and they were just as happy-go-lucky and carefree, dancing about and playing air guitar on their phones, goofing and talking around a water cooler, or having a meeting where you watch a guy pour coffee on his laptop.  Have you seen that one, where the guy is having the conversation in his head about how: Everyone else over there has a pad and I don’t have a pad.  Instead, I have a stupid, bulky laptop.  I’m gonna be stuck as a loser with that stupid, bulky laptop for the rest of my career unless I do something about it.  Then he walks over to the table and kind of accidentally spills his cup of coffee on the laptop.  Have you seen this one?

Mike:  Am I the only one that wonders: What is it that those people do?  The implication is that they’re all employed.  Okay, employed doing what?  They’re never working in any of these television commercials, any of the videos that you see online that make fun of these commercials.  People are never working.  What is it that they do?  What is it that they’re producing?  We are slowly but surely finding that those service economy jobs that were once so heralded at the turn of the century are not materializing.  They’re not materializing because there has to be productivity somewhere along the line.  This is where employment is to be found, folks.  I watched with great interest the last video posted by Mike Rowe, I think the guy from Reason TV interviewed him, where he just reiterated what he’s been saying and people like me have been saying for years and years and years.  The great unemployment crisis is not a crisis of a lack of work or of a lack of opportunity.  It is a crisis of a lack of will.

It’s not even fashionable to work with your hands anymore, although we all seem to enjoy the benefits.  We all seem to enjoy when we can drop our automobiles off and have some guy with caked grease under his nails he’ll never be able to remove fix it, don’t we?  Have you seen the caterwauling that’s going on on network television news shows and other assorted news shows and media presentations of the cold snap?  Young Eric and young Evan, what is the number one occupation in demand where it’s really, really cold and pipes are breaking all over the place today?

Mike:  That’s exactly right.  Where are you going to find plumbers at?  Plumbers are guys that are made fun of by Dan Aykroyd on Saturday Night Live when they bend over showing butt crack, if you recall the old comedy bit. Nobody wants to be a plumber, do they?  Talk about an insufferable occupation.  Who in dude’s holy name would want to do that?  There used to be all manner of people that wanted to do that.  As a matter of fact, they would go off and probably train with what used to be called a master plumber.  A master plumber is someone that has been proficient in that craft for a number of years.  I don’t know what the qualifications are, but they’re skilled enough at it to teach youth how to become plumbers, and then someday they can become master plumbers.

So Senator Jack Reed is crying in front of television cameras yesterday after the bill passed the Senate 60-37.  “Today I think we’ve given a lot of hope to millions of Americans who are struggling in a difficult economy to find jobs, who are struggling to provide sustenance to their families,” said Reed. [/private]

What about the people that will struggle in the future to provide sustenance for their families, senator, who will have to repay what you just borrowed so that the guy that won’t take the pipe wrench into his hand can provide sustenance.  By the way, he’s not providing or she is not providing sustenance for their families, someone else is.  There’s a big difference between actually providing and having the government provide by committing someone else’s resources to your sustenance.