Mike:  What brings about all this violence that we see these days?  Mrs. Church and I are exchanging text messages during the timeout about this.  She’s sending me the local stories.  We kind of live here, so we’re pretty close to the City of New Orleans.  I don’t actually live in the city, but I live close enough to it.  We’re exchanging stories about this.  One thing that always comes up in our conversations about this and the conversation that I have with many people around here is that I guess they call it the “culture of violence.”  [mocking] “It’s the culture of violence that these young people live in that drives them to do these things.”  It’s kind of like the Benghazi thing.  Who started, where’s the original sin?  From whence comes the culture of violence?  I think if you can get to the bottom of where is the genesis of or where you mind find the fountain from which the culture of violence starts, then maybe you might actually be able to talk about these things.  I am not a proponent or a believer that government is going to solve any of this.  This is one of the problems with watching Mayor Mitch Landrieu flounder about and get frustrated and seemingly angry over this yesterday.  [mocking] “I can’t believe this is happening.  What’s wrong with these people?”

We do not have a universal embrace of and universal defense of life, so people are free or feel they are free to subjectively say: People’s lives aren’t worth saving right now, aren’t worth respecting.  What’s the big deal if I spray some gunfire into a crowd of a bunch of people that I don’t know?  They’re out having a party they didn’t invite me to.  I’m not saying that this was a revenge shooting or anything of that sort, I’m just saying the conditions under which people engage in this behavior.  Look at the nutjob in Cleveland that was doing these unbelievably macabre things to these young women, the three of them he had captive in his house, the Castro guy.  This is right out of a horror movie, maybe worse than a horror movie.  We have to ask the question: Where does the seed come from that lets people think or causes men to believe that any of this sort of behavior, any of this disdain and disregard for life is acceptable?  Maybe I’m reading too much into it.  Maybe I should go to Batman — we play this clip from time to time on this show to drive similar points home.  Maybe it is that there are just some nuts out there that just want people to die and don’t have any reason for it.

(audio clip – Alfred from movie The Dark Knight: Well, because he thought it was good sport. Because some men aren’t looking for anything logical, like money. They can’t be bought, bullied, reasoned, or negotiated with. Some men just want to watch the world die.)  Why, Alfred?  Why?  Why do they do it?  There’s the why part of it.  Why do they do it?  Reading the rest of the story:

“It’s a shame and its got to stop,” he told The Times-Picayune from outside New Orleans’ Interim LSU Public Hospital. “You see it cascading across the country but we have more of it than anyone else.”

Detectives were conducting interviews and retrieving surveillance video from around the scene. [Mike: I wonder if there’s going to be a Boston-style manhunt. There’s all kind of surveillance camera all around the French Quarter. Of course, this wasn’t directly in the quarter.] Landrieu urged anyone with information about the shooting to come forward.

He added: “These kinds of incidents will not go unanswered. Somebody knows something. The way to stop this violence is for you all to help.” [Mike: Good luck with that, Mitch. Good luck with the people who know the perps in New Orleans to rat the other ones out. That just does not happen. Again, that’s part of that respect for life thing there, that universal respect for life.]

Second lines have been targets for violence in New Orleans in recent years. In the past, shooters have targeted a specific person in the crowd, which authorities say may have been the case Sunday as well.  But Landrieu dismissed the notion of outlawing the Louisiana tradition.  [Mike: The first thing to reach for: Maybe we shouldn’t have these stupid parades.  It’s the parade’s fault now.  The law-abiding now are to blame here.]

“It’s not the second line that did the shooting,” he said. “The cultural events are very important to us, it’s like calling for an end to Mardi Gras because someone takes an opportunity to shoot someone during one of our parades.”

“Second lines have been with us for a long, long time,” Landrieu added. “They are an important part of our culture and our heritage.”

“It’s strictly an act of street violence in New Orleans,” she said. 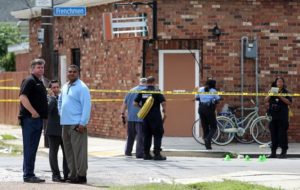