Mandeville, LA – Exclusive Audio and Transcript – Voting is not the ultimate act of self-government.  Let’s say you only voted every four years.  So you voted, you don’t have to actually govern yourself?  You’re not actually governed by a higher vote that you might cast, which is to be a virtuous, moral person?  My point is that we are putting an awful lot of pressure on ourselves.  People are making an awful lot of enemies out of friends and family over a stupid election.  It is just one election.  We’re not voting on whether or not to adopt the Communist Manifesto.  We’re not voting on whether or not we’re going to abolish the Constitution, although we probably have voted for that long ago after a succession of unsuccessful votes. Check out the rest in today’s audio and transcript…

Mike:  Julie is in Georgia next.  Yes, Julie?

Mike:  Good morning to you.

Caller Julie:  I was listening to you on my way to work.  I listen to you pretty much every morning.  I do enjoy listening to your show.  I guess as the election day gets closer, I think I’m like a lot of people.  You want to feel like we’re going to be able to do something positive on November 6th.  Sometimes, like this morning, I understand what you’re saying comparing and contrasting the candidates, but I don’t want to feel like they’re so much alike there’s no reason to vote.  Do you understand what I’m saying?

Caller Julie:  I think maybe there is just such a, I guess it’s almost like a fear.

Mike:  There’s a résumé difference, too.  Obama’s never held a job in the private sector in his life and it shows.  He can’t even count the proverbial hill of bean; whereas Governor Romney seems to have a firm grasp on economics.  I’ve got to tell you, Julie, I’m really getting tired of having to defend what I believe is a position that would have been held by someone like George Washington.  I don’t think that the president ought to be running the economy, so it doesn’t matter to me.  I don’t care if he’s created every job in the history of mankind, because I don’t believe, and there is no history that can convince me otherwise, that the office of the presidency was created and was practiced in for the sole and explicit purpose of micromanaging a $17 trillion economy, or even a $17 million economy back in 1791.  That’s not what it was made for.  Therefore, when I say I don’t see a big difference when it comes to policy, that’s what I mean.

For those of you that want, and maybe you want Romney to run your economy for you, Julie, then I would say he’s probably going to do a better job of central economic planning than the guy that’s never held a job and never had to create anything business-wise or product-wise in his life other than, let’s see here, propaganda is Barack Obama’s number one product he’s created the most of.  If the purpose for you to call me, and for those of you that have your fingers on the send button on your email and your fingers on the send button on Twitter, you’re totally misreading this.

When I go into that booth — this is just the way I look at it.  I, quite frankly, would think that we would all be far better off if we looked at it this way.  When I go into that booth, having just read the principle parts of the Constitution and Article II, what matters to me is who I think is going to execute Article II duties the best.  That’s what matters to me.  If that guy happens to be Mitt Romney, then I’ll vote for Mitt Romney.  If it happens to be Virgil Goode, I’ll vote for Virgil Goode.  I’m not going to let you call me a traitor or a treasoner because I chose Goode over Romney, or maybe I choose the Green Party woman Jill Stein.  The point is, I will base, and you should, that choice on how the office is to be executed from the document that created it.  What exactly is the problem there?

If I come to you, Julie, and I say I don’t see an awful lot of difference between someone that is pledging and wants to spend $3.75 trillion next year and somebody that is already on the books and wants to spend $3.78 trillion next year, I’m just being honest.  Should I come in here and lie?  People seem to want a shill and a propagandist for one political party, yet you hate someone that’s a propagandist for the other political party.  That’s a bit of moral relativism, I think.  Don’t you agree?

Caller Julie:  Absolutely.  I’m not so much saying that I totally disagree with you.  I don’t think anyone should be telling anybody else how they should vote.  You should vote your conscience.  Nobody can tell you how to do that.  That’s a personal issue.  I guess what I’m trying to say is, when I listen to you every morning, you are a big influence on people, and I think you are a good influence on people, but I feel like we may have a certain number, and again I’m not trying to be overly critical with you.  I’m just saying sometimes I think we have people that maybe aren’t motivated to vote.  Maybe they hear that and they think why should I vote?  It’s not who you vote for exactly.

Mike:  Julie, heaven forfend that a radio broadcast is going to cause someone to vote or not vote.  That’s an indication of how bad things are, the fact that people are turning to entertainers to guide them.  We make fun of people that are actors and actresses that run their mouths about politics and happen to be liberals and they should just shut up.  At the end of the day, many of your favorite radio and television personalities are entertainers as well.  We don’t tell them to shut up because [mocking] “You actually talk about serious things.”

There’s one more thing I will say to you.  I posted this somewhere last night.  Last night was really busy getting ready for yet another chili cook-off tomorrow for the Death Chefs, my cooking team.  Pardon me, I don’t remember where I put this, but I do remember what I said.  Julie, as an American citizen and as a [r]epublican, when I go to — I might even go vote early today.  It’s right across the street from where I am.  Studio D is in amongst the enemy.  We are amongst the local parish government.  We’re surrounded by it in the one private enclave twixt all the public buildings.  I could walk there.  It would take me two and a half minutes to get there, that’s roundtrip.

I do not believe and I do not fancy myself that were I to execute that task today, because I have executed that task, when I emerge from behind that curtain I have now ripped open my Oxford shirt and sport coat like Superman coming out of a telephone booth and underneath is a lily-white tunic with a giant maroon cross emblazoned across the front of it.  In other words, all I did was cast a ballot.  I am not a crusader.  That is not the sum total of my political existence.  It is simply one action of thousands.  I would suggest to you that the other actions are more important than the actual action of pulling that level.  This idea “if you don’t vote” like this idiocy with P. Diddy and his “Vote or Die” crap and with many people that are demagoguing this to death on Facebook and Twitter and sending me hate mail right now [mocking] “If you don’t vote, you’re some kind of a traitor.  What kind of a human being are you?”

Voting is not the ultimate act of self-government.  Let’s say you only voted every four years.  So you voted, you don’t have to actually govern yourself?  You’re not actually governed by a higher vote that you might cast, which is to be a virtuous, moral person?  My point is that we are putting an awful lot of pressure on ourselves.  People are making an awful lot of enemies out of friends and family over a stupid election.  It is just one election.  We’re not voting on whether or not to adopt the Communist Manifesto.  We’re not voting on whether or not we’re going to abolish the Constitution, although we probably have voted for that long ago after a succession of unsuccessful votes.  To put the importance on it that we’re putting on it is, to me, to diminish all the stuff that goes on in between that is as important.  I would rather influence someone to self-govern and consider all things every day than spend all of my time fixated on the action of one particular day every four years in November. 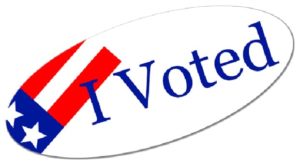 I appreciate what you have taught us little “r” republicans in the past Mike. Now I know that voting for the lesser of two evils was never right. Yes I know Ron Paul will not be on the ticket in Michigan but, Gary Johnson is. You sir did not have this influence but, Ron Paul did. I have heard all the rhetoric from those so-called patriots and their propaganda does not wash anymore. The only thing I regret is not listening to Mr. Paul from the beginning. I never thought I would be so encouraged by one man but, Mr. Paul made me see the truth. Those who believe in Romney have that right but, as for me Patrick Henry was probably one of our last prophets when he fought those who wanted BIG GUBMENT. Thank you sir again and keep the flame glowing Mike. If we do not stick together then the Alexander Hamilton’s of this country win. Best regards sir, John W. Pickett- dude # 3064.