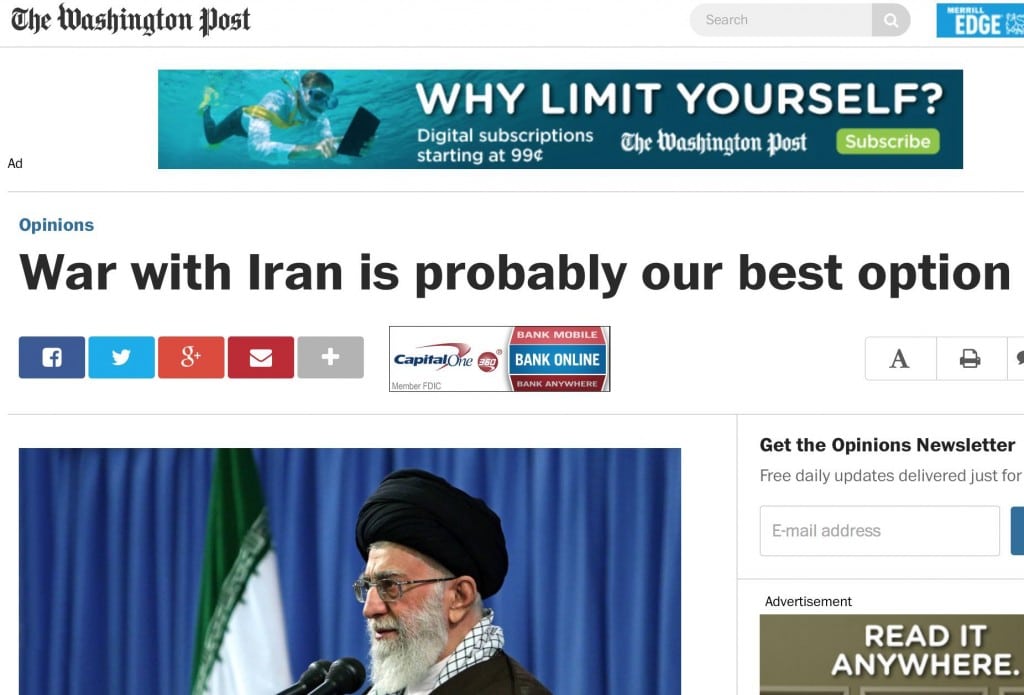 “It is shocking to many that the first notion of individual rights in the West is predicated upon each person’s ability to murder one another.”

It would take crash course in minor logic to explain all the errors in this headline alone (e.g. how is it possible to use the term “probably” to embellish “best”?). The objective reader, while slogging through this “editorial” by alleged “scholar” Joshua Muravchik, comes face to face with the intractable “thought” process of nearly all moderns: we are at war, we like war, war is our natural state and if we don’t commit to fighting war we can never have peace, whatever that is, magna mysterium. This great mystery of the Modern’s revulsion to peace (pax) is completely understandable and becomes more fiendish when understood philosophically with a caveat. The philosophy employed is that of Aristotle and Aquinas i.e. pre-“enlightenment”. Philosopher H.H. Ambrose gets us started with the shocking revelation about what “rights” mean to Modern Man and whose concept this was to develop.

“In Chapter XIV [of Leviathan]: Of the First and Second Natural Laws, and of Contracts, Hobbes articulates one of the monumental shifts in ancient to modern thought: individual rights. Aristotle, St. Thomas Aquinas, and the Catholic Church never spoke in terms of individual rights. The standard for the state and for its citizens was natural law. What was good and what was evil was not predicated upon man’s judgment, but rather by the external standard set upon him by nature. In Hobbes’ deconstruction of nature into a realm of war and chaos, he gives the West its first true taste of rights predicated upon the individual. He states:

And because the condition of man (as hath been declared in the precedent chapter) is a condition of war of everyone against everyone against everyone, in which case every one is governed by his own reason, and there is nothing he can make use of that may not be a help unto him in preserving his life against his enemies, it follows that in such a condition every man has a right to everything, even to one another’s body. And therefore, as long as this natural right of every man to everything endues, there can be no security to any man how strong or wise soever he be, of living out the time which nature ordinarily allows men to live.

It is shocking to many that the first notion of individual rights in the West is predicated upon each person’s ability to murder one another.“

Read that last sentence again, think about it and contrast it with the flippancy of the average Joe and Jane’s response to an ISIS beheading, ergo:”WE, ought to do something about that and take care of THEM.” I emphasize the two operative pronouns that apply to Hobbes’ philosophy, we and them. How does the individual use “we” in this sense when he or she cannot possibly know 1. what other “we’s” may think about this issue and 2. cannot possibly know WHO the amorphous members of ISIS are? But you see, none of this matters because pace Hobbes, “we” are always in a state of war against “them”. Hobbes would define “we” and “them”, thus:

“If now to this natural proclivity of men to hurt each other, which they derive from their passions, but chiefly from a vain esteem of themselves, you add the right of all to all, wherewith one by right invades, the other by right resists, and whence arise perpetual jealousies and suspicions on all hands, and how hard a thing it is to provide against an enemy invading us, with an intention to oppress and ruin, though he come with a small number, and no great provision. It cannot be denied but that the natural state of men, before they entered into society, was a mere war, and that not simply, but a war of all men against all men; for what is war, but that same time in which the will of contesting by force is fully declared either by words or deeds?”

I have previously explored the question of why so many modern Americans have a built in defense mechanism to repel the serious contemplation of achieving a status without war, i.e., peace? Hobbes explains that as well.

” The time remaining [between wars] is termed peace.”

These quotations are taken from Chapter 1 of the Hobbes’ treatise “The Citizen” (de Cive), I encourage you to read the entire chapter to grasp the totality of Hobbes’ rejection of the Order of civilization, Christendom, that had preceded him. That order, dear reader, was the pre-“Reformation” (revolution is more accurate) teaching of the Catholic Church as codified by St. Thomas Aquinas in the greatest work on the subject ever, the Summa Theologica. Hobbes also gives us the alleged causes of why our state of perpetual war must be just that, perpetual.

“But it is easily judged how disagreeable a thing to the preservation either of mankind or of each single man, a perpetual war is: But it is perpetual in its own nature, because in regard of the equality of those that strive, it cannot be ended by victory; for in this state the conqueror is subject to so much danger, as it were to be accounted a miracle, if any, even the most strong should close up his life with many years, and old age.”

To Hobbes, and Locke after him, the natural state of Man is thus devoid of any natural inclination to Truth, in the form and substance of Christ. Christ came to make all men equal by dying for the redemption of all our sins thus making it possible for all men to achieve God’s wish for us, the soul’s eternal Love and worship of Him in the beautiful glory that is heaven. To Hobbes1,, Descartes, Locke, Rousseau, Marx, Kant et cetera, this cannot be because there is no God and even if there were, he cannot be known. It is to the modern concept of The State that these men turn as a replacement for Christ. Note that in rejecting The Known Truth, the moderns create their own truth, The State, and then their own dogma, “rights”. This is acknowledgement that civilization naturally requires an order. It has become the job of modern Man to “prove” that this order can be organically created as opposed to it being super-naturally programmed into us and brought into the natural world by Christ. This helps explain our infatuations with Constitutions and Bills of Rights et al. Quoting Ambrose again, this attains more clarity.

“If equality is found in the mutual ability to murder one another and war is the natural state of man, what is Hobbes’ solution? Society is formed out of a contractual agreement whereby out of preservation the citizen transfers his power to the state. An idea he takes up in great detail in his Leviathan.”

The idea of American Exceptionalism is a hand-maiden to Hobbe’s perpetual war scenario and provides much needed ersatz theology to our “war, war, war…kill, kill, kill” thinking. We have to continue making war and exporting all the goodness that is Us through our wars because we are Us by our own Declaration, cogito ergo sum as Descartes put it. Yes, the capital D is intentional. Think of the Declaration in terms of what historian Pauline Maier appropriately called “American Scripture” and we have the workings of an established religion albeit a secular one. I have labored here, incompletely and ineffectively to explain that the current method of thinking, employed by most moderns including Americans is formed upon a philosophical error and possibly, heresy. This cannot be corrected at the ballot box. To the reader, I apologize for any errors I may have made and welcome your corrections.

1. Latter day biographers of Hobbes claim that he was NOT trying to claim there was no Trinity or even a Divine God but rather he questioned what Holy Mother Church and her councils had concluded pace the Nicene Creed on the matter. See Mystery Unveiled: The Crisis of the Trinity in Early Modern England, By Paul C.H. Lim, pp 225-230