Mandeville,LA– This Founders TV Episode was originally published on Nov 25,2013 and is part of the Founders TV/ Post Show Show.

Mandeville, LA – Exclusive Video and Audio – George Washington issued proclamations that led to Thanksgiving and the National Day of Prayer, the latter of which did not sit well with Jimmy Madison. After the Convention, Madison developed a “hands off” view of the National Government as it relates to religion. In the early days, there was no separation of religion and government. Many of Congress’s meetings began and ended with prayer. During Monroe’s presidency, Madison didn’t think that the government should be paying Chaplain’s to visit the troops, now if he had tried this just 20 years earlier, no one would have even listened to him, but by the 1790’s things had already changed. For more on this, be sure and check out today’s Founders TV and sign up for a Founders Pass if you haven’t already. 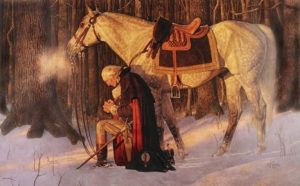