Mike:  So why aren’t people considering the ultimate smackdown of the NSA, which is to leave the freaking Union and not grant them the power to spy on you?  Why isn’t that being talked about?  [mocking] “We need to reform this.”  You can’t reform that monster.  Does it look like it’s being reformed?  Do you think they’ve actually stopped the program since all the whining, carping, and bitching about it began, do you?  If you do, I have some beachfront property right in the middle of Arizona that I would like to show you for sale.  It’s a great bargain today.  Through this special radio offer, if you act today, we can get you into that beachfront home for a mere $299,000.  Sounds like a bargain.  Too good to be true?  Well, citizen, you should sign up for this.

Seriously, does anyone believe that any of this chicanery, any of this subterfuge and unconstitutional excessive abuse of power has stopped since all this began?  Is there one surefire way that you can ultimately say no to the NSA, no to the IRS, no to the CIA, no to the EPA, no to the Department of Education, no to the Department of Energy, no to the FDA, no to the FTC, no to the ABC agency of your choice?  Yes, there is.  It is an option that was used in 1776 when the American patriots, as we call them today, basically committed treason against the crown by leaving it, even though I don’t perceive it or believe that it was treason because they seceded.  They left that government and formed their own.  As Jefferson said, when any government becomes destructive of these ends, the people have an indubitable, indefeasible, inalienable right to reform, alter or abolish it.

Let’s go down the checklist.  Do you believe that this government and the NSA and all the stuff we’re learning about is going to be reformed?  If you do, see beachfront property in Arizona sales.  Number two, do you believe that the NSA, the CIA, and Ted Cruz are going to be successful in abolishing the IRS?  Again, see beachfront property in Nebraska.  So what is the remaining option?  I should have said alter, not abolish.  What is the remaining option?  You’re not going to abolish it but you could abolish your connection to it by doing what?  Embracing that Latin term secedere, meaning to withdraw.  I’m going to secedere to the break room right now.  I don’t want to hang out with you guys anymore.  I think I’m going to do better off on my own…

See, ladies and gentlemen, because of the scale of the operation, and because it is so large and there are so many trillions of dollars at stake, no one in the federal leviathan is going to give up that gravy train.  They’re certainly not going to give it up simply because some hoi polloi peasants out here across the amber waves of fuel are upset about it.  They might give some of it up if the revenues stopped coming in.  Do you believe that a significant number of American citizens are going to withhold their taxes from the federal leviathan?  Do you believe they’re going to march into their employer’s office and tell the employer: Either take me off W2 withholding today or I quit.  That’s one solution, isn’t it?  I want to become a 1099 contract employee.  Just give it all to me and I’ll take care of the taxes, which I will not take care of.

Then again, you’re going to find people who say, [mocking] “Don’t you want to pay your fair share of what your grandma is consuming in Social Security?”  Hold the phone there, fella, I thought grandma already paid into Social Security.  Isn’t that the point of FICA, Federal Income Contributions Act?  Yes, it is.  We’re told that there’s a trust fund out there, that everybody’s money has been squirreled away in some bunker somewhere in West Virginia.  We all know the real side of that story, don’t we?  That is that there is no trust fund and that money was spent in real time as it was collected, just as it is being spent in real time as we remit it every two weeks, once a month, once a week or so, whenever your W2 withholding paycheck is issued to you.

So then, fair citizen, again I ask of thee, what is the solution to the quandary that we now all collectively face together?  I suggest to you that it is, since reforming, altering and abolishing directly is not going to happen, separation is the answer.  Separation is something that also provides and offers the opportunity for a clean break with all of this, and a chance to actually say: We learned the lessons of what happened over the course of the last hundred years.  Maybe we ought to write a constitution for this new federation or republics or union of republics, maybe we ought to write a new constitution.  We can base it on the old one, but maybe there were some safeguards in there that were overlooked.  It is the only possibility that actually holds out the opportunity of true abolition, meaning that you will no longer be required to suffer any of these things because you will no longer be a citizen under that form of government.

Mike Church Show Transcript – We Clearly Don’t Have A Constitution Anymore, So Why Have States?

It is the form of government.  I thought it was the great desideratum, as James Madison would say, that we have governments instituted to secure our liberties and to secure our properties and the blessings of liberty to our posterity.  Is that what this one is doing, or is it doing the opposite?  Who do you think is going to repay that $17 trillion debt that grows every day?  Who do you think is going to suffer the most, the rich and the elites that are all entangled and enmeshed in this when the dollar ultimately comes crashing down to the level that it’s supposed to be, after all the quantitative easing and the other shenanigans that they pulled with the printing and extension of credit ends?  You, fair citizen, ultimately will pay the price for this, as will I.  So why isn’t anyone brave and bold and courageous enough to say the time to separate from this monstrosity is long past overdue?  Well, fair citizen, you just heard it.  Now, the question is, what shall we do about it? 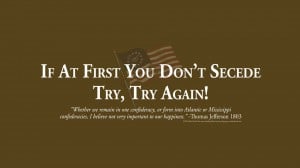