Mandeville, LA – Exclusive Transcript – Those of you that are CPAs or bookkeepers or accountants out there, how many of you would it take to keep up and to track that kind of spending?  Just think about the manpower and the labor it would take to just track that, hell, just to record it.  You’d have to have a machine working 24/7 just to print the checks, and they do.  They have batteries of machines working 24/7.  That is what our noble, allegedly constitutionally-consecrated government does.  In whose definition of government is that even a government any longer?  That is a laundering operation.  That is an operation that every mobster who ever lived would be envious of. Check out the rest in today’s transcript…

The federal government began fiscal year 2013 continuing its path from fiscal year 2012 – deeply in the red, with $120 billion deficit for October.  [Mike: That’s just a drop in the bucket.  $120 bil?  Come on, that’s chump change.]  That figure suggests that in 2013, the U.S. government will run a trillion-dollar deficit for the fifth straight year.

Mike:  Yes, and it’s not David Petraeus’ house either.  It’s the House of Representin’.  But Boehner and company, their hands are clean.  They have nothing to do with this.  This is all Obama and Reed that spent all this money.  The House has not appropriated or raised a nickel of this revenue.  They’re our kids.  They’re our buddies.  They’re here to save and help and protect us.  How’s that working out for you, Tea Party?  That means that the general government’s deficit for 2012 — you people who are driving, pull over for a moment because you’re going to be shocked.  If you’re standing, sit down.  That means that the general government’s budget deficit for 2012 totals a whopping $1.1 trillion.

But the only reason anyone wants to secede from the union is because they’re racist, hick hayseeds and they just can’t stomach being governed by President Obama.  Maybe they just can’t stand being governed by a legislature that can’t manage its own affairs, doesn’t even know where it’s spending money to the point where it wastes more money than most countries in the history of mankind have ever even spent.  That is the size and scope of this problem.  It just keeps getting worse.  I don’t have any good news for you people today, other than Louisiana, Texas and I believe now Alabama have now crossed the 25,000 petition threshold, which is silly, of the secession petitions that have been posted at WhiteHouse.gov.

That deficit underscores just how difficult it will be for Congress to head off the “fiscal cliff.”  The deficit for October alone is larger than the yearlong cuts of $110 billion, due Jan. 2 under last year’s debt deal.

Mike:  Did I not tell you and have I not been telling you that what you call sequester cuts are not cuts?  They are decreases in the amount of increase that is scheduled.  They’re not sequestering a solitary penny.  All they’re doing is making it sound as though, [mocking] “The fiscal cliff!  If we don’t do something, we’re not going to get to spend all this extra money!”  Well, the sequester wouldn’t even stop the budget deficit.  The measly amount of sequester would not — this is how ridiculous this is.  I want you to understand this.  Listen to this for a moment.  The amount that is going to hurtle us at light speed towards this thing called the fiscal cliff, this is the amount that Congress is going to be PREVENTED from spending.  I use the word prevented in all caps.  I’m yelling at you.  The amount that Congress is going to be prevented from spending, if the sequester holds, is less than the current deficit for the month of October.

In other words, even if the sequester holds the first month of October, the new budget year will still show a deficit.  Of course, in November, there won’t be any sequester, neither will there be for December, January, February, March, the rest of the year.  All this talk of the calamity that will befall mankind if the sequester is allowed to stand, oh, the humanity of it all, is just a bunch of crying into not-so-cold milk.  So nothing has changed from when we were talking about this in earnest last year and when people actually cared about it.  They stopped caring about it when they put all their eggs into the Romney/Ryan versus Obama basket.  Well, citizen soldier, it’s time to buck up and start caring again.

With the Senate stalemated, Congress has not passed a budget in three years, leaving entitlement programs growing on autopilot and doing little to bring in more revenue.  [Mike: You don’t need any more revenue.  You need to cut spending.]  The government is projected to raise $2.8 trillion in revenue this year, but likely will spend $3.8 trillion.

Mike:  Isn’t it funny, ladies and gentlemen, that just last year the general government was talking about spending $3.68 trillion, ultimately spent $3.7 trillion, and that this year, without anyone batting an eye, they’re going to add $100 billion to that.  Just think if you live in a state like mine in Louisiana.  The entire gross domestic product of the State of Louisiana barely touches the $100 billion mark.  If you took everything that is earned in a medium-sized state like Louisiana, confiscated all of it, the whole kit and caboodle — they send the Army down here and say, “You guys gotta work for a whole year and you’re going to give us everything you earn, we’re going to take all of it,” you would not be able to pay for the increase from 2012 to 2013.  That’s just the increase.

Here’s another question for you.  That means that this whole endeavor is, at least at some level, inflationary, and as soon as that inflation begins to hit, I believe and many others believe, there will be no stopping it.  Let me ask you a question.  How many of you are slated to get end of the year COLA living increase raises?  AG, are you going to get a big enough cost-of-living increase raise at the end of the year to put gas in your Maserati that Stephanie Cutter owes you and I for throwing the election to Obama?

Mike:  Do you think I might have some information about that?

AG:  I’m unaware of any of that coming down the line.

Mike:  You’re not privy to the conversations I’ve been having with accounting.  I’ve gone to accounting.  I told accounting at Sirius XM human resources that your last name is no longer Gruss.  Your last name now starts with an “ST” and ends with an “RN.”  You’re going to owe me for that, by the way.  That’s how we’re going to get the Maserati.  When you get that, don’t forget who instigated that.  Don’t forget who planned that.

If we cruise on over to ZeroHedge.com, there’s even more bad news: “US Budget Deficit Soars in October As Government Spends Over $300 Billion In One Month.”  Just grasp spending $300 billion in one month.  How do you even tabulate that?  Let’s go through a little kindergarten exercise, shall we?  A million dollars is one thousand $1,000s.  If somebody walked up to you and gave you a stack of Ben Franklins one thousand thick like you see in the movies, you would have to have one thousand of those to equal a million, if my math is correct.  That’s a lot of cash to be carrying around.

Those of you that are CPAs or bookkeepers or accountants out there, how many of you would it take to keep up and to track that kind of spending?  Just think about the manpower and the labor it would take to just track that, hell, just to record it.  You’d have to have a machine working 24/7 just to print the checks, and they do.  They have batteries of machines working 24/7.  That is what our noble, allegedly constitutionally-consecrated government does.  In whose definition of government is that even a government any longer?  That is a laundering operation.  That is an operation that every mobster who ever lived would be envious of.  Yet here we sit talking about, [mocking] “So what $300 billion?  They’re $120 billion in the hole for October, big deal.”  It is a big deal! 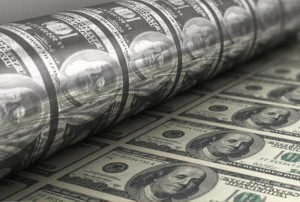