Mike:  Apparently I am insufficient and not up to the task of making the point that to discuss the 800,000 furloughs that the Pentagon is claiming they’re going to have to implement if the sequester goes through, that to discuss the furloughs and how to trim the toilet seats and better manage the airplanes is to engage in an exercise of cooperation with existing tyranny.  War is the health of the state.  There are books out there under that title.  Read them.  Since I am failing in the meager task which was my charge, I’m going to resort to an actual founding father.  I know they lived in the 18th century.  I know there wasn’t internet.  I know there weren’t airplanes.  I know there weren’t any Muslims in the world (right).  I know we had no enemies.  I know all these things.  I do not believe their wisdom is to be dismissed so frivolously and I would say so arrogantly.

Who the hell are we to sit here and look back in time at the men that we allegedly give all this credence to, these guys called founding fathers, then when their words are inconvenient to our own lust for power, we just dismiss them as if they never happened?  That is not how I operate or think.  I’m going to try to let George Mason explain why the 800,000 and the fact that it exists is the problem, not specifically what they do but the fact that they are there in support roles to the standing army.  That is the issue.

From June 9, 1788 at the New Academy of Arts & Sciences in Richmond, Virginia on what is known as Shockoe Hill, the Virginia Ratifying Convention is meeting this day.  They are discussing Article I, Section 8 and Congress’s ability to call out the militia.  George Mason follows George Nicholas in trying to implore his countrymen that the clause in question is too dangerous to accept ratification.  He’s going to say that the one clause, the militia clause, is the most dangerous clause I the entire Constitution and it will render all of our freedoms, all of our liberties, and our revolution nugatory.  It will kill the whole thing.  In other words, it will kill the spirit of ’76.  It would take another 77 years to put the final dagger into it, which was put into the spirit of’76 in a courthouse in Appomattox, Virginia, thus the title What Lincoln Killed: Episode I.  Get it on CD.  Here is what Mason said.  He spoke for about four hours.  I’m only going to give you maybe five minutes of what he said.  Here’s what Mason said about what we’re talking about here today.  Just to reset, the Pentagon is saying they’re going to have to furlough 800,000 civilian employees if the sequester goes through.  Here’s what he said, in part:

Mr. Chairman, unless there be some restrictions on the power of calling forth the militia, to execute the laws of the Union, suppress insurrections, and repel invasions, we may very easily see that it will produce dreadful oppressions. It is extremely unsafe, without some alterations. It would be to use the militia to a very bad purpose, if any disturbance happened in New Hampshire, to call them from Georgia. This would harass the people so much that they would agree to abolish the use of the militia, and establish a standing army. I conceive the general government ought to have power over the militia, but it ought to have some bounds. If gentlemen say that the militia of a neighboring state is not sufficient, the government ought to have power to call forth those of other states, the most convenient and contiguous. But in this case, the consent of the state legislatures ought to be had. On real emergencies, this consent will never be denied, each state being concerned in the safety of the rest. This power may be restricted without any danger. I wish such an amendment as this–that the militia of any state should not be marched beyond the limits of the adjoining state; and if it be necessary to draw them from one end of the continent to the other, I wish such a check, as the consent of the state legislature, to be provided. Gentlemen may say that this would impede the government, and that the state legislatures would counteract it by refusing their consent. This argument may be applied to all objections whatsoever. How is this compared to the British constitution? Though the king may declare war, the Parliament has the means of carrying it on. It is not so here. Congress can do both. Were it not for that check in the British government, the monarch would be a despot. When a war is necessary for the benefit of the nation, the means of carrying it on are never denied. If any unjust requisition be made on Parliament, it will be, as it ought to be, refused. The same principle ought to be observed in our government. In times of real danger, the states will have the same enthusiasm in aiding the general government, and granting its demands, which is seen in England, when the king is engaged in a war apparently for the interest of the nation. This power is necessary; but we ought to guard against danger. If ever they attempt to harass and abuse the militia, they may abolish them, and raise a standing army in their stead. There are various ways of destroying the militia. A standing army may be perpetually established in their stead. I abominate and detest the idea of a government, where there is a standing army. The militia may be here destroyed by that method which has been practised in other parts of the world before; that is, by rendering them useless–by disarming them.

Mike:  Is Mason correct?  Weren’t the militias basically disarmed and disbanded and by the turn of the 20th century did not exist?  That is true.  That is absolutely true.  What do we have instead of the militia?  What he says he abominates, a standing army.  I’m not so naïve as to think that anytime soon we’re going to abandon and dismantle our standing army.  I don’t think that.  I think you can long for it.  I believe you can wish for the day where we actually were a country of liberty and peace and did not believe we needed to be the world’s police force, that we needed to be involved in all the affairs of the entire known universe which would require such a massive, unfathomable expenditure of treasure and, not coincidentally, of blood. 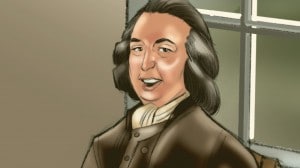