Mandeville, LA – I often quote or paraphrase Patrick Henry railing against taxes saying “they will send swarms of agents, hither and yon to eat out our sustenance”. The quote is actually not as vulgar but just as and exciting when Henry uttered it in the VA Ratifying Convention on Saturday, 07 June, 1788. Taken in context, Henry’s point is that he preferred “requisitions” to “taxes” because the former gave States the power to restrain the Central authority. The politically motivated actions of today’s IRS “swarms” would, I imagine, motivate a man like Henry to accuse the highest political power of treason as in.

“Caesar had his Brutus, Charles the First his Cromwell and George the Third — .” Cries of “Treason…Treason!” ring out from the House of Burgesses, Henry undaunted finishes. “…may profit by their example. If this be treason, make the most of it.” (2) This episode must have been in the front of Henry’s mind when he warned of granting the new Congress, under the Constitution, the power of direct taxation.

“Another gentleman tells us that no inconvenience will result from the exercise of the power of taxation by the general government; that two shillings out of ten may be saved by the impost; and that four shillings may be paid to the federal collector, and four to the state collector. A change of government will not pay money. If, from the probable amount of the imposts, you take the enormous and extravagant expenses which will certainly attend the support of this great consolidated government, I believe you will find no reduction of the public burdens by this new system. The splendid maintenance of the President, and of the members of both houses, and the salaries and fees of the swarm of officers and dependants of the government, will cost this continent immense sums. Double sets of collectors will double the expenses; to those are to be added oppressive excisemen and custom-house officers. Sir, the people have an hereditary hatred to custom-house officers. The experience of the mother country leads me to detest them. They have introduced their baneful influence into the administration, and destroyed one of the most beautiful systems that ever the world saw. Our forefathers enjoyed liberty there while that system was in its purity; but it is now contaminated by influence of every kind. 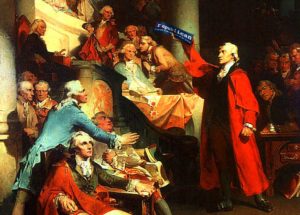 [r]epublicans should wonder exactly when this “hereditary” hatred of tax officers and of tax initiatives ended and gave way to the “Aw shucks, we gotta have gubbmint so we gotta fund the derned thang too. Aunt Petunia’s daughters need their ‘daddy checks’ just as much as I need my tobaccy.” Next Henry conceives (correctly I believe) that the term “We the People” was calculated to turn [r]epublicans into democrats and then into government slaves.

“The style of the government (We, the people) was introduced perhaps to recommend it to the people at large; to those citizens who are to be levelled and degraded to the lowest degree; who are likened to a herd;* and who, by the operation of this blessed system, are to be transformed from respectable, independent citizens, to abject, dependent subjects or slaves. The honorable gentleman has anticipated what we are to be reduced to, by degradingly assimilating our citizens to a herd.

[*Here Governor Randolph arose, and declared that he did not use that word to excite any odium, but merely to convey an idea of a multitude.]

Mr. Henry replied, that it made a deep impression on his mind, and that he verily believed that system would operate as he had said. He then continued: “I will exchange that abominable word for requisitions. Requisitions, which gentlemen affect to despise, have nothing degrading in them. On this depends our political prosperity. I never will give up that darling word requisitions: my country may give it up; a majority may wrest it from me, but I will never give it up till my grave. Requisitions are attended with one singular advantage. They are attended by deliberation. They secure to the states the benefit of correcting oppressive errors. If our Assembly thought requisitions erroneous, if they thought the demand was too great, they might at least supplicate Congress to reconsider — that it was a little too much. The power of direct taxation was called by the honorable gentleman the soul of the government: another gentleman called it the lungs of the government. We all agree that it is the most important part of the body politic. If the power of raising money be necessary for the general government, it is no less so for the states. If money be the vitals of Congress, is it not precious for those individuals from whom it is to be taken? Must I give my soul, my lungs, to Congress? Congress must have our souls; the state must have our souls. This is dishonorable and disgraceful. These two coördinate, interfering, unlimited powers of harassing the community are unexampled: it is unprecedented in history. They are the visionary projects of modern politicians. Tell me not of imaginary means, but of reality; this political solecism will never tend to the benefit of the community. It will be as oppressive in practice as it is absurd in theory. If you part from this, which the honorable gentleman tells you is the soul of Congress, you will be inevitably ruined I tell you, they shall not have the soul of Virginia. They tell us that one collector may collect the federal and state taxes. The general government being paramount to the state legislatures, if the sheriff is to collect for both, — his right hand for Congress, his left for the state, — his right hand being paramount over the left, his collections will go to Congress. We shall have the rest. Deficiencies in collections will always operate against the states. Congress, being the paramount, supreme power, must not be disappointed. Thus Congress will have an unlimited, unbounded command over the soul of this commonwealth. After satisfying their uncontrolled demands, what can be left for the states? Not a sufficiency even to defray the expense of their internal administration. They must therefore glide imperceptibly and gradually out of existence. This, sir, must naturally terminate in a consolidation. If this will do for other people, it never will do for me.”

0Shares
Previous PostThe Rich Get Richer, The Elite More Powerful, So What Do The Rest Of Us Get?Next PostGOP Wants Bigger Pentagon, Smaller Schools, Atlas Shrugs

Friday Red Pill Diaries-There Was A Menacing Regime BEFORE There Was A Biden Regime!