Mandeville, LA – Exclusive Audio and Transcript – When I got in this morning, the first thing I heard was the kid’s question.  Romney’s first response is we need more big government, more Pell Grants.  I’m already puking all over my chat room last night going, “More Pell Grants?  Who’s going to pay for them?  I thought you were gonna balance the budget.  I thought you were gonna cut spending.”  Then he launches into this dissertation about making these factories.  As you said, you could see this kid sitting there going, “I don’t want to work in a carpet mill.  I don’t want to be a coalminer’s son.  What are you talking about?  I want to hang out at an AT&T Wireless commercial and play my smartphone.  What are you talking about working in a factory?  I don’t want to manufacture anything, Mitt.  I have a degree.  Didn’t you hear?  I said I have a degree.” Check out the rest in today’s audio and transcript…

Mike:  Joe in North Carolina, you had a question about the student who asked the first question last night, I assume?

Caller Joe:  Yeah, Mike.  I was sitting there watching facial expressions of a young man when Romney gave his answer, and his mother.  By the end of Romney’s answer to his question, both of them was crying.  This child looked like he had never mowed the grass before.  Mitt comes up, “We’re gonna create factories.”  You remember the cartoon characters that used to show what was going on in people’s heads?  I was looking at his mother and it was like this kid in his cap and gown and put him on a Greyhound bus headed to Dalton, Georgia to go to work in a carpet mill with a degree that she’s paid $500,000 for in an Ivy League school on Long Island.

Caller Joe:  Then the idiot Obama comes in and anytime anybody asked him a question, it’s like Jim Jones in Guyana.  Don’t worry about the details.

Caller Joe:  Just take your glass and drink your Kool-Aid and everything is going to be fine.  The only thing I got out of last night’s debate is —

Caller Joe:  I was thinking more along the lines Obama kept referring to the military.  I spent ten years in the military.  If they had fed that tea to me and I’m out there getting my ass shot out, I’d be wondering isn’t this better just to walk away from here?  It ain’t gonna make no difference what I’m doing over here.

Mike:  When I got in this morning, the first thing young Eric brought into me was the kid’s question.  Romney’s first response is we need more big government, more Pell Grants.  I’m already puking all over my chat room last night going, “More Pell Grants?  Who’s going to pay for them?  I thought you were gonna balance the budget.  I thought you were gonna cut spending.”  Then he launches into this dissertation about making these factories.  As you said, you could see this kid sitting there going, [mocking] “I don’t want to work in a carpet mill.  I don’t want to be a coalminer’s son.  What are you talking about?  I want to hang out at an AT&T Wireless commercial and play my smartphone.  What are you talking about working in a factory?  I don’t want to manufacture anything, Mitt.  I have a degree.  Didn’t you hear?  I said I have a degree.”

Caller Joe:  I’m driving down the road.  I drive a truck.  I’ve got a master’s degree in education.  I hate stupid people and that was just a stupid answer.

Mike:  [laughing] He’s right, the look on that kid’s face.  The kid was such a nerd, right, Eric?  He almost looked like Milton from Office Space.

Eric:  You gotta give him some credit.  He handled the pressure of asking a question.  He looked very, very nervous.

Mike:  The question almost sounded like this: [clip of Milton from Office Space] “I don’t care if they lay me off, either, because I told, I told Bill that if they move my desk one more time, then, then I’m quitting.  I’m going to quit.  I told Dom, too, because they’ve moved my desk four times already this year.”  He kind of sounded like that.

Mike:  I think the response, Bill Paxton said it best: [clip of Pvt. Hudson from Aliens] “That’s it, man.  Game over, man, game over.  What are we gonna do now?  What are we gonna do?”  [clilp of Kyle Reese from The Terminator] It can’t be bargained with.  It can’t be reasoned with.  It doesn’t feel pity, or remorse, or fear.  And it absolutely will not stop, ever, until you are dead.”  And finally, if you’re a constitutionalist or a [r]epublican, as am I, this was your response to last night.  [clip of Hudson from Aliens] “Maybe you haven’t been keeping up on current events, but we just got our asses kicked, pal.”  [laughing]  Play the manufacturing jobs for the diplomas answer.

from professors, neighbors and others is that when I graduate, I will have little chance to get employment.  What can you say to reassure me, but more importantly my parents, that I will be able to sufficiently support myself after I graduate?

Mitt Romney: Thank you, Jeremy.  I appreciate your question and thank you for being here this evening, and to all of those from Nassau County here that have come, thank you for your time.  Thank you to Ulster University and for Candy Crowley for organizing and leading this event.  Thank you, Mr. President, also for being part of this debate.  Your question is one that’s being asked by college kids all over this country.  I was in Pennsylvania with someone who just graduated, this was in Philadelphia.  She said, “I’ve got my degree.  I can’t find a job.  I’ve got three part-time jobs.  They’re just barely enough to pay for my food and pay for an apartment.  I can’t begin to pay back my student loans.”

What we have to do is two things.  We have to make sure that we make it easier for kids to afford college, and also make sure that when they get out of college, there’s a job.  When I was governor of Massachusetts, to get a high school degree, you had to pass an exam.  If you graduated in the top quarter of your class, we gave you a John and Abigail Adams Scholarship, four years tuition-free to the college of your choice in Massachusetts that’s a public institution.  I want to make sure we keep our Pell Grant program growing.  We’re also going to have our loan program so that people are able to afford school.  The key thing is to make sure you can get a job when you get out of school.

Mike:  If that answer was bad, I certainly don’t want to hear the other one, the other King George IV.  When he says bringing the jobs back, you took that to mean manufacturing tires and steel and Persian rugs and carpet and what have you, right?

Eric:  Well, yeah, and Obama’s answer regarded energy and how we were going to use energy to grow our economy with renewable energy and whatnot.  I don’t know what notion it is, where this came from that the government is responsible for giving you a job.  Coming out of college, I certainly didn’t feel that way.

Mike:  But Eric, you had the “conservative” saying, “I’m going to get you a job.”  You can say whatever you want about me and the way I talk about these things on this program, but at least I am bipartisan in my criticism.  It is not the job of the President of the United States to find employment for that kid.  As a matter of fact, I need to go find this letter.  There was a letter that was written to John Adams — I know that history doesn’t matter to most people.  To this audience, that is growing, that it does matter.  When John Adams was president, a former constituent of his when he was a representative in the Massachusetts legislature wrote to him and basically asked him for a job, or she asked if her son could go to New York and find a job with him.  Adams would have spent the first part of his term in the federal capital in New York, not in Mordor on the Potomac River.  Adams wrote back and he was livid.  “Madam, it is not the job of the President of the United States to find employment for your child,” something to that effect.  For King George IV, of course, you’ve got to find that kid a job.  If you can just do that 110,000 times a month, because that’s how many new kids enter the workforce, governor.  Talk about repairing the economy.  He’s going to get in there and he’s Superman.  He’s going to do that himself.

Eric:  I also don’t see how adding more people to the competition is going to help increase jobs.  Why are so many people allowed to go to college?

Mike:  Why are they encouraged to go to college?

Eric:  Say what you want about college, it’s not for everybody. 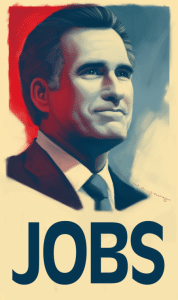