Mandeville, LA – Exclusive Transcript – Just reading through this thing, this must be 4,000 words long, “IRS Knew Tea Party Was Being Targeted In 2011.”  You want to talk about things that actually were denied and people denied them with knowledge, this may be your actual Benghazi.  The story I have is from the Huffington Post.  Check out today’s transcript for the rest…

Mike:  Rob mentioned the IRS story.  Just reading through this thing, this must be 4,000 words long, “IRS Knew Tea Party Was Being Targeted In 2011.”  You want to talk about things that actually were denied and people denied them with knowledge, this may be your actual Benghazi.  The story I have is from the Huffington Post.

Senior Internal Revenue Service officials knew agents were targeting tea party groups as early as 2011, according to a draft of an inspector general’s report obtained by The Associated Press that seemingly contradicts public statements by the IRS commissioner.

The IRS apologized Friday for what it acknowledged was “inappropriate” targeting of conservative political groups during the 2012 election to see if they were violating their tax-exempt status.

Mike:  If you accept tax-exempt non-profit status, this is part of the game, folks.  If you’re going to play the game in Mordor, they force you basically. You are forced to claim this 501(c)3 or 501(c)4 alleged tax-exempt status.  That’s how you get the [mocking] “We’re non-partisan.”  That’s how you get the non-partisan status and how you are then able to raise these tens of millions of dollars that these 501(c)3s raise on behalf of their non-partisanship.  Folks, they ultimately wind up being part of the governmental machine.  All one needs to do to look for evidence of this is just look at how a group like the Heritage Foundation has evolved over the course of the last 20 years, how now it basically operates as a Republican go-to fact-finding and policy support outfit.  [mocking] “We want to change this social policy.  Well, we’ll need some research on this.  We only have 24 staffers.  I know what we’ll do.”   Heritage will write the reports.

I don’t mean to single out Heritage and pick on then, but this happens over and over and over again.  It is absolute baloney and malarkey that [mocking] “They have to maintain their non-partisan status and their tax-exempt status.  They can’t do this and they can’t do that.”  They’re part of the government.  They’re what is known nowadays as an NGO, non-governmental organization.  I don’t have time to get into a big, long dissertation on this, but the rise of these non-partisans and non-profit groups can be tracked all around Mordor on the Potomac River.  What’s that building where you and I were driving past last time I was in XM and they had a crane out there?  That was the NPR building you told me, wasn’t it?

AG:  Yeah, the NPR building has been finished up.  It might have been the labor building as well.

Mike:  When you’re driving around, you see cranes all over the place.  It’s not all just government buildings.  There are buildings going up everywhere that house all manner of these agencies.  That doesn’t make what the IRS did right.  This is, again, I talked about this earlier in the first hour of the program.  You have a government so you don’t have anarchy.  You have a government that is supposedly supposed to protect your private property, supposed to protect and enforce the laws, and it’s supposed to do that — what is the lady that has the scales of justice in her hand?  She has a handkerchief around her eyes.  She’s supposed to be blind.  The government is supposed to be blind and neutral.  As we see, this is just a partisan shell game.  It just depends on who it is that’s in charge.  Right now it’s the Obama administration in charge, so the IRS can then be used and utilized to get out there and harass groups they disagree with.  That’s what went on here.

We’re talking about impeachable offenses.  It’s not just the IRS commissioner here.  When the Congress has oversight over this, you want to talk about things that Congress ought to be doing, [mocking] “We promise hearings on this.”  You shouldn’t promise hearings on this.  You ought to promise impeachment trials on this.  This is the abuse that you worry the most over.  When the forces of the government can be brought to bear against you as a private entity, regardless of whether it’s a non-profit or for-profit.  The government has at its disposal unlimited funds.  They can torment you and torment you with your own money.  Just think of the advantage that has with it.  It contravenes the spirit of a constitutional system to allow agencies to develop as these agencies develop, and for the apparatus of the thing to be so large that it cannot possibly be controlled.  It can’t be monitored by Congress.  They don’t have enough time.  There aren’t enough days in the year and hours in the day to have hearings on all the abuses that go on in all the agencies.

What is the only solution then?  It is to eliminate the agencies.  This is why you have a written Constitution.  The reason why you write a constitution down is because it is supposed to limit what it is that the governing authority can do.  It’s pretty simple stuff here.  [mocking] “We’re enumerating certain powers.  These are the powers you can take.” — “All right, is that it? Is that the whole list?” — “That’s the whole list.”  That’s why it’s so vitally important, number one, not just to have the oath of office, but to have an understanding of what that oath of office and the spirit of the Constitution or of a written constitution.  What is it supposed to do?  It is supposed to provide a framework under which a government can be controlled by the people.  That’s what the purpose of it is.  It’s not to guarantee and sanction and enshrine rights.  You get your rights from God.  That’s where your rights come from.  The purpose of the government in having a written constitution is to prevent what I’m talking about right here from ever happening.

Of course, now that it’s happened — don’t think that the IRS is the first agency to ever do this.  You people out there that are landowners and have any water on your land and have ever had a run-in with the Department of the Interior, the EPA or any of these other agencies, you know exactly what I’m talking about.  Those of you that work in the oil and gas industry and have had any dealings with these people, you know exactly what I’m talking about.

But on June 29, 2011, Lois G. Lerner, who heads the IRS division that oversees tax-exempt organizations, learned at a meeting that groups were being targeted, according to the watchdog’s report. At the meeting, she was told that groups with “Tea Party,” “Patriot” or “9/12 Project” in their names were being flagged for additional and often burdensome scrutiny, the report says.

Mike:  Of course, when a private entity or a quasi-private entity, a non-profit, has to do battle with the government and when that battle is burdensome, that means they’ve had to lawyer up.  If you have to lawyer up, you have to expend funds.  In other words, you have to pay for this.  Again, your fundraising is going to be limited.  The ability to prosecute and persecute you from the government point of it, from their end of the table is limitless.  That’s why it’s such a dangerous power that is to be avoided at all costs.

The Treasury Department’s inspector general for tax administration is expected to release the results of a nearly yearlong investigation in the coming week. The AP obtained part of the draft report, which has been shared with congressional aides.

Among the other revelations, on Aug. 4, 2011, staffers in the IRS’ Rulings and Agreements office [Mike: They have bureaus inside the bureaus of the bureaus. You have the bureau of the Internal Revenue Service and inside that bureau there’s another bureau.] “held a meeting with chief counsel so that everyone would have the latest information on the issue.”

On Jan, 25, 2012, the criteria for flagging suspect groups was changed to, “political action type organizations involved in limiting/expanding Government, educating on the Constitution and Bill of Rights, social economic reform/movement,” the report says. [Mike: If you were out there teaching about the Constitution or allegedly teaching about it, then you were subjected and you could have been targeted if you were in some particular groups.]

While this was happening, several committees in Congress were writing numerous letters IRS Commissioner Douglas Shulman to express concern because tea party groups were complaining of IRS harassment.

In Shulman’s responses, he did not acknowledge targeting of tea party groups. At a congressional hearing March 22, 2012, Shulman was adamant in his denials.

“There’s absolutely no targeting. This is the kind of back and forth that happens to people” who apply for tax-exempt status, Shulman said at the House Ways and Means subcommittee hearing. [Mike: By the way, who gets to write the rules of the non-profit, tax-exempt status? Of course it is an agency. You have government writing rules for people that want to do business with government to live by.]

Shulman was appointed by President George W. Bush, a Republican. His 6-year term ended in November. President Barack Obama has yet to nominate a successor. The agency is now run by an acting commissioner, Steven Miller.

The IRS said in a statement Saturday that the agency believes the timeline in the IG’s report is correct, and supports what officials said Friday.

Mike:  What I want to know is where is the Benghazi-style, look at what these guys were doing, somebody lied and people’s organizations were persecuted and nearly prosecuted and somebody has got to pay for this?  I say the way to pay for it is to eliminate the indirect taxation that is currently referred to by the internal revenue service.

Lerner’s position is three levels below the commissioner.

“The timeline supports what the IRS acknowledged on Friday that mistakes were made,” the statement continued. “There were not partisan reasons behind this.”

Mike:  If they make a mistake and they make a mistake and you’re the person or you’re the entity that is aggrieved by the mistake, what is your recourse?  You can’t sue these people.  They’re not going to cut you a check for your damages.  What are you going to get in return for all this?  What about all the hours that you had to waste?  What about all the attorneys that you had to pay for?  That’s why this power is the most dangerous of all powers. 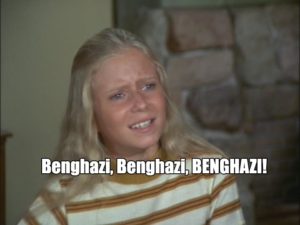