Mandeville, LA – Exclusive Transcript – “Patrick J. Buchanan, writing his weekly column, or his biweekly column, under the title of “Whose Side Is God on Now?”  Listen to this.”  Check out today’s transcript for the rest….

Mike:  Patrick J. Buchanan, writing his weekly column, or his biweekly column, under the title of “Whose Side Is God on Now?”  Listen to this:

In his Kremlin defense of Russia’s annexation of Crimea, Vladimir Putin, even before he began listing the battles where Russian blood had been shed on Crimean soil, spoke of an older deeper bond.

Crimea, said Putin, “is the location of ancient Khersones, where Prince Vladimir was baptized. His spiritual feat of adopting Orthodoxy predetermined the overall basis of the culture, civilization and human values that unite the peoples of Russia, Ukraine and Belarus.”

Russia is a Christian country, Putin was saying.

Mike:  Remember, folks, when this started coming up, when Putin wrote this op-ed for the New York Times back in May, remember many of you said he was to be ignored because he was ex-KGB, he was ex or probably still pinko commie, and that he was just manipulating American patsies like me into sympathy for him so he could get away with conquering the rest of the known universe.  Actually, it’s the United States and our “allies” that are doing the lion’s share of the conquering these days.  Buchanan has picked up on this and is writing about it.

This speech recalls last December’s address where the former KGB chief spoke of Russia as standing against a decadent West:

“Many Euro-Atlantic countries have moved away from their roots, including Christian values. Policies are being pursued that place on the same level a multi-child family and a same-sex partnership, a faith in God and a belief in Satan. This is the path to degradation.”

Indicting the “Bolsheviks” who gave away Crimea to Ukraine, Putin declared, “May God judge them.”

What is going on here?

With Marxism-Leninism a dead faith, Putin is saying the new ideological struggle is between a debauched West led by the United States and a traditionalist world Russia would be proud to lead.

Mike:  Remember on Friday’s program Christopher Ferrara was talking about how Hungary, the former Soviet republic, now an independent republic, has just adopted and put into law a constitution for the people of Hungary that is a Christian constitution.  It acknowledged and recognizes that there is a transcendent God that presides over the affairs of man.  It put it into its constitution.  It was an agreement, a compromise made between Protestants and Catholics.  This is big news.  Of course, the American media would never cover this.  They have no interest in this whatsoever.  We don’t want anyone on earth to know that the entire planet is not pursuing the decadent course that we are.  Let’s just assume that since everyone else is doing it it must be a good thing and we’re the leader in it.  Back to Buchanan: 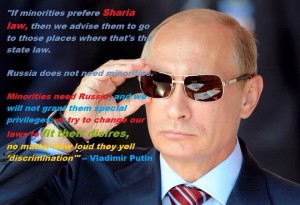 In the new war of beliefs, Putin is saying, it is Russia that is on God’s side. The west is Gomorrah.

Western leaders who compare Putin’s annexation of Crimea to Hitler’s Anschluss with Austria, who dismiss him as a “KGB thug,” [Mike: That’s most of you listening to me right now.] who call him “the alleged thief, liar and murderer who rules Russia,” as the Wall Street Journal’s Holman Jenkins did, believe Putin’s claim to stand on higher moral ground is beyond blasphemous.

But Vladimir Putin knows exactly what he is doing, and his new claim has a venerable lineage. The ex-Communist Whittaker Chambers who exposed Alger Hiss as a Soviet spy, was, at the time of his death in 1964, writing a book on “The Third Rome.”

The first Rome was the Holy City and seat of Christianity that fell to Odoacer and his barbarians in 476 A.D. The second Rome was Constantinople, Byzantium, (today’s Istanbul), which fell to the Turks in 1453. The successor city to Byzantium, the Third Rome, the last Rome to the old believers, was – Moscow.

Putin is entering a claim that Moscow is the Godly City of today and command post of the counter-reformation against the new paganism.

Putin is plugging into some of the modern world’s most powerful currents.

Not only in his defiance of what much of the world sees as America’s arrogant drive for global hegemony. Not only in his tribal defense of lost Russians left behind when the USSR disintegrated.

He is also tapping into the worldwide revulsion of and resistance to the sewage of a hedonistic secular and social revolution coming out of the West.

In the culture war for the future of mankind, Putin is planting Russia’s flag firmly on the side of traditional Christianity. His recent speeches carry echoes of John Paul II whose Evangelium Vitae in 1995 excoriated the West for its embrace of a “culture of death.” 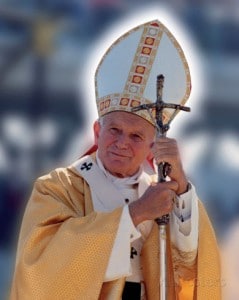 What did Pope John Paul mean by moral crimes?

Mike:  Folks, let me just say if John Paul were alive today, he would call the theft of Jennifer Lawrence’s selfies a moral crime.  He would call the creation of the nude selfies as a moral crime as well.  It gives into the mortal sin of vanity.  Of course, we’d actually have to believe in sin and define sin for people to believe in and abide by that.  That’s not cricket to do any longer now, is it?

Washington Post columnist Anne Applebaum writes that she was stunned when in Tbilisi to hear a Georgian lawyer declare the former pro-Western regime of Mikhail Saakashvili, “They were LGBT.”

“It was an eye-opening moment,” wrote Applebaum. Fear and loathing of the same-sex marriage pandemic has gone global. In Paris, a million-man Moral Majority marched in angry protest.

Mike:  How do you like that, Buchanan tapping into the work and ramblings of Masha Gessen?  If you’re wondering, Masha Gessen is the — when I played the clip of the radical lesbian talking about abolishing marriage and about how her daughter is the product of her latest partner, as she calls her, and a sex relationship with her brother, that’s Masha Gessen.  Buchanan writes:

Author Masha Gessen, who has written a book on Putin, says of his last two years, “Russia is remaking itself as the leader of the anti-Western world.”

Mike:  This is interesting here.  What has the West come to mean these days?  The West has come to mean capitalism, or what we call capitalism, the ribald, uncensored, untraveled pursuit of what?  Possessions, material goods, material things.  As I said, if you want to watch American television, any day of the week, any network, doesn’t matter which one, and you didn’t know any better, if you were transported down here from another planet, you would be of the opinion that there is nothing that is worth having in the United States that cannot be purchased, no matter what it is.  We get happiness now out of having the right credit card in our wallets.  What’s in your wallet?

What if I were to tell you that in my wallet was a laminated card that had some Latin prayers on it?  That was the most prized thing in my wallet, not my MasterCard.  [mocking] “Yeah, but Mike, you’re only saying that.  And even if you mean it, you’ve gone too far over the edge with this stuff, Mr. Church.  Get back to bashing Obama.”

This is bashing Obama.  Obama is as big a secularist as ever lived and has ever been in the White House.  Those of you that so viscerally oppose the president and so desperately wish for his reign to end, you are wishing for the reign of what Jefferson called witches to end.  At the end of the day, President Obama has made über wealthy people out of formerly just wealthy people.  This is not slowing down.  Back to Buchanan:

But the war to be waged with the West is not with rockets. It is a cultural, social, moral war where Russia’s role, in Putin’s words, is to “prevent movement backward and downward into chaotic darkness and a return to a primitive state.”

Would that be the “chaotic darkness” and “primitive state” of mankind, before the Light came into the world?