Mandeville, LA – Exclusive Transcript – Rand just became a lot more powerful.  Let me repeat, with that action of endorsing Governor Romney last night, Rand became a lot more powerful.  He is now a lot more difficult to dismiss as some ideological Libertarian crank.  That’s a good thing.  Let’s look for the glass half full.  Just know, Rand, I’m watching you.  If we don’t keep our eyes and we don’t hold noses and shoulders to proverbial grindstones, they tend to walk off the path.  That’s all.

Mike:  My good buddy Marty Brown, Marty, Marty, Marty, dude, you got this all wrong, man.  I’m not having beer and dinner with you anymore if you send me another note like this because you couldn’t be more wrong if you woke up this morning, picked your phone up and said, [mocking] “I’m going to send him an email and I’m going to try to be wrong.”  Marty, Marty, Marty.  It took a little longer than I thought, but knew that you and soon the rest would start going after Rand.  I always knew he was a better politician and more conservative than dad.  I also knew that he was going to get hammered for not being as pure as you and the Libertarians want.  He is not a Libertarian.

Marty, number one, first of all, dude, I am not a Libertarian and do not characterize myself as such.  Second of all, I thought I tried to make this point clear, that there is a difference between being a principled person and not being in elected office, and being a formerly principled person who is now in elected office.  That’s why I told the story of John Taylor of Caroline.  I’ve got the Taylor of Caroline book in my bag.  I’m going to get it out and read that damn letter.

Marty, what you’re missing here is it probably is as important for someone like myself to not give Rand a pass on everything because he’s Rand, and instead say, “No, no, no.  Dude, you’re not going there.  We’re not going to go down that road.  We know where that road ultimately leads.”  If I or others like me don’t express our disapprobation at what is happening here and say, Okay, I understand politics being what it is.  Don’t trade your principles in.  Well, then Marty, who’s going to do it?  If the goal is the U.S. Constitution as it was enforced, kind of, during the Jefferson Administration or during the Pierce Administration or during the Tyler or Cleveland Administrations, pray tell, sir, how do we get there if we cannot keep people like Rand on the straight and narrow?  I have to criticize him, in other words.  If I don’t, then I’m the fake; I’m the fraud.  I’m not despondent over it.  Let me prove to you, AG, I’m not despondent.  Are you listening?

Mike:  [flick of a lighter, puff of smoke]  There, I just lit a Havana.  I have one Havana with me, an actual piece of contraband, and I just lit it.  I’m not despondent.  Even if I was, it wouldn’t matter anyways.  Who am I, what are we, other than just parts of body politic?  You don’t need to talk me off the ledge.  I’m not on the ledge.  It’s our job here to remain vigilant.  He’s a politician.  We’re the vox populi.  We don’t hold the fort down.  Who will?  I’m good, man.  I’m good.  It’s Friday.  I’m over my nightmare now.  We just go from phase one to phase two, that’s all.  It’s just a transition.  You may proceed talking, me off the ledge.

AG:  While I’m with you on the regulation aspect of the interview with Hannity, I was somewhat surprised to hear what Senator Paul had to say.  I’m of the belief that Senator Paul and Congressman Paul are so principled in their beliefs that when Senator Paul specifically mentioned meeting with Governor Romney a week or two ago with Washington and laying out his set of beliefs, which are reflected in the Ron Paul Revolution movement, that if Mitt Romney wasn’t at the very least, and I mean the very, very least receptive to at least having that conversation, that discussion, I don’t believe Rand Paul would have thrown his hat in with the Romney camp.

In the sense that I don’t think there’s an abandonment of principles just because he’s going to go out and campaign for Romney.  I think that would be discrediting the political brilliance that exists within Senator Rand Paul and Congressman Ron Paul, who, while we love to think of them as above the dirty game of politics, I think they know what they’re doing. They know that their influence can be that much greater if they stick with their principles, which I do believe they’re going to do, become a part of the bigger discussion with Romney.

The case could be made that Monroe, who’s rarely regarded as a founding father, although he should be, was one of the good guys throughout his career.  I’ve talked about this on the program before.  Since we’re dealing with politics and we’re dealing with policies, you just have to be vigilant on this.  Jefferson left us with some instructions.  The price of liberty is eternal vigilance.  If you don’t have eternal vigilance, you’re not going to have liberty.  That’s all.

AG:  Do you think that you get to a tipping point within the movement where the risk of being marginalized as fringe and not actually part of the discussion, that that kind of climactic point is reached?  Up until now, you could say that maybe the Ron Paul movement hasn’t been widely accepted by the mainstream media, but you’ve now reached that point where, not that you throw your hat in with the GOP establishment, but you at least make sure you’re getting that side of the table, that you are seated there.

Mike:  Yes, you’re not on the menu; you’re at the table, the old adage.  Let’s phrase this another was, shall we?  Rand may be listening or may have one of his peeps listening, texting him right now.  Rand just became a lot more powerful.  Let me repeat, with that action of endorsing Governor Romney last night, Rand became a lot more powerful.  He is now a lot more difficult to dismiss as some ideological Libertarian crank.  That’s a good thing.  Let’s look for the glass half full.  Just know, Rand, I’m watching you.  If we don’t keep our eyes and we don’t hold noses and shoulders to proverbial grindstones, they tend to walk off the path.  That’s all. 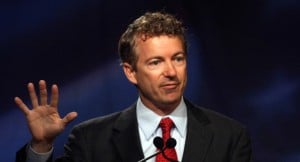 Rand is not Ron Paul. Rand is a PaleoCON or a TradCON, this is an important distinction from his reputed libertarianism. Those who think that Rand has now thrown in with the Socialists embrace the libertarian tendency to political suicide. No vote on a bill has taken place in the Senate. No treaty has been endorsed and offered in the Senate. This is plain and simply the process of politics. GW & co. DID make a deal with the Tories, it was called the Treaty of Paris. Note that there were 14 signatories for this treaty, 13 Sovereign states, listed by name and the State of Great Britain.

No reason to freak out if you’re a Ron Paul supporter, or liberty movement activist. It’s just an endorsement. Ron Paul is one of the only politicians, period, who doesn’t come out and openly support the nominee as a partisan matter of custom. As a result, Dr. Paul received minimal support from other Republicans in federal office. In fact, many Republicans just pretended Ron Paul wasn’t running in the first place! Rand Paul has had a long time to observe the way politics works, and has obviously decided to make different tactical decisions. I can’t say I’ve been thrilled by all of them, but if his votes stay true- that’s what I care about most.

How wonderful it is that Washington and Jefferson and Madison compromised with the Tories. Had they not done that, where would we be? No doubt, endorsing a socialist is a good thing. It puts one at the table … with the other socialists.