Mandeville, LA – Exclusive Transcript – Had Jefferson not listened to Madison, and had he listened instead to Edmund Pendleton, the senior Virginia statesman of the day instead.  Pendleton wrote a very long letter to his former student — that’s what Jefferson was at the time, a former law student of Pendleton’s — begging him to lead the charge to have another convention to propose amendments to the Constitution.  There were six of them that Pendleton had proposed.  One of them would have reined in the holy hellion terror that is the federal judiciary today.  TJ did not listen.  Instead, Madison told him that there was nothing to worry about, that the Constitution was clear, no one was going to violate it and we were doing just fine.  That was a mistake and an error that I bet he’s rolling in his grave over and Thomas Jefferson would like to take back. Check out the rest in today’s transcript…

Caller George:  Usually it’s the plaintiff that realizes once they’re sucked into federal court, the costs associated with it and the discovery that’s done, it’s prohibitive to go to federal court if you’re a plaintiff in that kind of an action.

Mike:  That only makes sense.  Of course, that’s why federal courts are preferred.

Mike:  You wouldn’t want to have lawyers practicing law in all 50 states and having to abide by the laws that are made by the people that have to live under them.  Let’s have one-size-fits-all laws.

Caller George:  That’s why the federal court’s jurisdiction, originally under the Constitution, was so limited.

Mike:  It wasn’t limited, though, and that’s the problem.  The fact that it was not limited and that the Third Article was not fleshed out well enough is one of the reasons why we’re in this pickle today.  Had Jefferson listened — I don’t know if I’ve ever told this story, and George, thank you very much for your phone call today, my friend.

Mike:  Merry Christmas to you.  Had Jefferson not listened to Madison, and had he listened instead to Edmund Pendleton, the senior Virginia statesman of the day — this piece is actually posted at MikeChurch.com.  Pendleton wrote a very long letter to his former student — that’s what Jefferson was at the time, a former law student of Pendleton’s — begging him to lead the charge to have another convention to propose amendments to the Constitution.  There were six of them that Pendleton had proposed.  One of them would have reined in the holy hellion terror that is the federal judiciary today.  TJ did not listen.  Instead, Madison told him that there was nothing to worry about, that the Constitution was clear, no one was going to violate it and we were doing just fine.  That was a mistake and an error that I bet he’s rolling in his grave, in my What Lincoln Killed: Episode I, Thomas Jefferson would like to take back.

AG:  He’s now brought up, if you Google Bane soundboard on the internet, you will get the 40 or so clips from the movie.  He’s now brought that up on the computer over there and is clicking them as he sees fit.

Mike:  I only mentioned obliquely the ruling in Illinois before I said it was not a constitutional exercise.  Let me just update the audience on this.

In a major victory for gun rights advocates, a federal appeals court on Tuesday struck down a ban on carrying concealed weapons in Illinois—the only remaining state where carrying concealed weapons is entirely illegal—and gave lawmakers 180 days to write a law that legalizes it. In overturning a lower court decision, the 7th U.S. Circuit Court of Appeals said the ban was unconstitutional and suggested a law legalizing concealed carry is long overdue in a state where gun advocates had vowed to challenge the ban on every front.

Mike:  You should challenge it on every front, but you should not be challenging it in federal court.  You people that want to incorporate the Second Amendment for your own little designs and so you can claim a pyrrhic victory, you’re going to rue the day.  You are going to rue the day.  The next time I hear one of you complaining about Congress passing a law that circumscribes the amount of bullets in a clip or what kind of caliber you can have or how many assault weapons or how long the magazine can be, do not call this show and complain because I will hear none of it.  You asked for incorporation, you got it.  It won’t be long before some future Pelosi congress again will try and literally take your guns away now that the incorporation nitwittery out there has given them the power, with a smile, to do so.

That’s why you don’t incorporate.  That’s why you keep the damn federal courts out of this.  You fight the battle in Illinois and you keep fighting it until you win.  If you can’t win because Chicago stands in the way, then kick Chicago out of the state.  Secede.  Break the damn thing up.  It should be its own little republic anyway.  We’d rather incorporate the Second Amendment.  This is not a Jeffersonian thing to do.  It’s not a Madisonian thing to do.  It further erodes federalism.  I know, come on, Mike, the Second Amendment is universal.  Your right to protect yourself is certainly universal.

“There is no suggestion that some unique characteristic of criminal activity in Illinois justifies the state’s taking a different approach from the other 49 states,” Judge Richard Posner, who wrote the court’s majority opinion. [Mike: That’s why the states are sovereign entities, so they can take a different approach from the other 49 states, you silly tyrant, you, Judge Richard Posner.] “If the Illinois approach were demonstrably superior, one would expect at least one or two other states to have emulated it.”

Mike:  So if you have one state out there that has made some substance illegal because they have decided, as a sovereign state may, that they don’t want it in their state and the other 49 states have it, according to Judge Posner, who are you to make that determination?  Say for example you have a code of food preparation, maybe like we have here in Louisiana, and you certify certain things as Cajun.  What if somebody gets angry and says: I don’t want to pay to go learn Cajun, but I ought to be able to claim that I’m Cajun?  The state says: We actually have a code.  Can’t a federal judge just come in and strike that down in favor of that man?  After all, 49 other states do not have Cajun cooking codes.  What in the hell is wrong with you imbeciles in Acadiana, Louisiana that want to have your own silly little cooking code?

Folks, don’t you see?  The erosion of the individuality and the uniqueness of the states, that’s what makes the union.  Without it, we’re just one giant, 314-million-person-strong kingdom run by kings and their judges, exactly as Mr. Henry predicted.  It’s tragic, absolutely tragic.  They will use this same line of reasoning on any manner of things that anyone wants to bring into a federal court, mark my words. 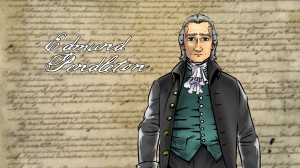 When we comply with suspension of God given right to protect our property and life, these things happen.The Dark Knight shooter chose the only theater, out of seven i believe, that was posted no guns allowed. Schools no gun zones. If i was a school teacher I would carry and tell nobody. I refuse to suspend my God given rights, because a man or group of men say I must!

Guns don’t shoot people; people shoot people. Knives do not stab people; people stab people. Automobiles do not hit innocent pedestrians or drivers; intoxicated drivers hit innocent pedestrians or drivers. If we look at countries that have strict gun control laws, we see that they have higher crime rates and their people are more oppressed. Heck, just look at cities such as Chicago, which have tough gun control laws, and then look at the crime/murder rates. We have the right to bear arms to protect ourselves from criminals and from the government if it were to become too powerful. If you have read “Ameritopia: The Unmaking of America” by Mark Levin, he accurately points out that throughout history, many Utopians (or Statists if you wish) have called for disarming the people for the so called “greater good” of the people (think Hitler, Lenin, Stalin, Mao, Ceausescu-all were brutal tyrants and committed many horrible crimes against humanity). However, these same statists that are so concerned for the people only promote policies such as gun control only to further promote their Utopian agenda that results in more tyranny, more oppression, and less liberty since the people cannot rise against the statists that are in power. Furthermore, we cannot allow the liberals to politicize a terrible tragedy so they can promote their Utopian agenda. Not only is it an assault on our freedoms, but it is also downright insulting to the victims and the families of the victims of the Connecticutt school shooting.