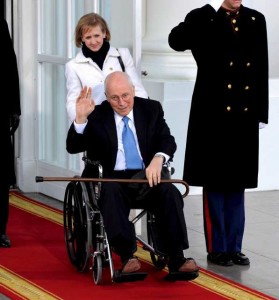 epa01606453 US Vice-President Dick Cheney is pushed by wheelchair out of the White House after having coffee with the Obamas and Bushes prior to the Presidential Inauguration ceremony on the Capitol steps in Washington, D.C., USA 20 January 2009. It was reported that Cheney injured himself while trying to move something in his home. Obama will become the 44th U.S. President later today. EPA/MIKE THEILER