It Had Nothing To Do With Turtles, or Fish…..or Birds

Mandeville, LA – Exclusive Transcript – “There’s an interesting report that Mr. Hayward makes in the opening chapter of How the West Was Lost, which is entitled “From the Beginning.”  That’s that the clause in Article IV, Section 1 of the U.S. Constitution, that only applied and thus would apply to the land that was ceded by the several states that I was mentioning earlier that would comprise and make up the Northwest Territory.  Let me repeat that.  That would mean that the territory power would thus be limited to, or was supposed to be limited to the Northwest Territory, which was territory covered under the Northwest Ordinance.”  Check out today’s transcript for the rest…

Mike:  I just checked the Twitter feed, which today is dead, mortis, stick a fork in it.  Of the few tweets out there amongst the non-cognizant who are still in Easter / Spring Break mode and have not yet awakened, one is from a gentleman informing me, [mocking] “Mitter Church, Harry Reid does not represent the people in Nevada.  He represents the State of Nevada to keep the federal gubbmint from steamrolling them.”  No, he doesn’t.  Prior to the 17th Amendment he did, but today he doesn’t represent the state legislature of Nevada, of course he doesn’t.  That was the whole purpose of passing the 17th Amendment, to see to it that senators did NOT represent the state legislatures any longer.  The spirit of a Senate seat today is to represent citizens.  Wait a minute, Mike, that’s what the House of Representin’ does.  That’s exactly right.  What do we need two bodies for then?  Well, you don’t.

We have two bodies today because the upper chamber, the citizens of the United States are said to be comprised of such men of august reputation and educations that they will see to it that the laws are faithfully enforced, and that the kneejerk reactions of the House are mitigated.

Funny, though, that all the chicanery that happened with Obamacare or the Affordable Care Act, most of it happened in the Senate.  You got the exact opposite of the wise, august and sagacious gathering of legislators.

To tell you the truth, folks, I get really tired of talking about the federal monstrosity.  I much more enjoy figuring out how to de-federate.  For those of you that have my docudramedy, the wonderful and insightful and enlightening What Lincoln Killed: Episode I — which is still out there and not listened to by I’d say 99.2 percent of this audience, refusing to learn about nullification and interposition and how the early Americans who lived under the Constitution, what they thought about nullification, interposition, the Constitution, the right of secession, and what made up a federation of states.  Was it a union of states or was it a national blob of America?  No, it was not a blob of America.  You can find out in What Lincoln Killed: Episode I.

Some of you will remember, and some of you even asked me to send you a translated version of what the ReFederator said.  A few of you wanted to know, the eleven of you who have actually heard What Lincoln Killed: Episode I, had asked whether or not I made the ReFederator character up.  No, I did not.  I made up the character’s persona that he was Randy Savage, the World Wrestling Federation wrestler.  That part of it was made up for entertainment purposes.  But no, there actually was a guy called the ReFederator.  He wrote under that penname because many men back in the day wrote under pennames because the things they were saying may have been not so gentlemanly toward those that they were writing about.  They did not want to cast attention to their own characters, so they would write anonymously, under pseudonyms.  ReFederator was a pseudonym.  Why did the ReFederator want to refederate?  What did he want to refederate?  In order to refederate, you’d first have to un-federate, wouldn’t you?  Yes, you would.  The ReFederator was, in the first instance, an un-federator.  Then you would refederate under a union formed out of six or seven northeastern states.

Back to the original point, make no mistake about it, Harry Reid does not represent the State of Nevada’s government, he just simply does not.  He allegedly represents the people.  Then the follow-up and to finish the statement about how boring it is to talk about and obsess over the national legislature, it is far more exciting to me to talk about and make the historical argument for the realignment of the North American Union.  I think in that realignment, that’s where the future of the people of these United States lies.  As a matter of fact, I think that so much so that I think that destiny is the one most likely to prevail.  Our democracy, as it’s called democracy, is not going to prevail.  We know this.  Historically they do not prevail.  We will not be the exception, especially as large and out of scale as 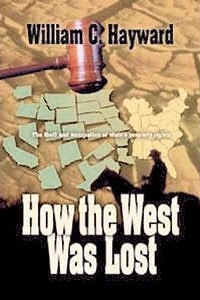 we have become.  We may succumb to, for some time, a despotism that most of us cannot fathom right now.  Some of you are thinking that we’re going to become to a despotism and that is another possible outcome of all this, that we succumb to, give into, cave into a continued centralization and that the centralization gets worse before it gets better.

For those of you that say, [mocking] “After it gets worse, Mike, how are we gonna get out of it?  Yeah, Mitter Church, how are we gonna get out of it, Mitter Church?”  Well, the same way the Russkies got out of it.  It will begin to crumble under its own weight.  The misery will be unpalatable and people will have to choose and decide to break up and secede from one another and start new political entities that may best secure their liberties and freedoms, as Jefferson wrote in the Constitution.  To me, that’s the exciting talk.

I want to go back to this book How the West Was Lost for just a moment.  I have a copy of it now. It is the number one item, by the way, in the Amazon book, El Jefe Dude [r]epublican book selection library that’s at the bottom of every page at MikeChurch.com.  I added How the West Was Lost by William C. Hayward to the Amazon list.  Remember, it’s out of print.  It’s only available in used copies.  You can get it.  You can also get the digital edition.  The digital edition is what I went for because the used copies was 60 bucks or something like that.  I didn’t feel like forking that over for a used copy, especially since I wanted it as quickly as possible so I could share some of it with you.

There’s an interesting report that Mr. Hayward makes in the opening chapter of How the West Was Lost, which is entitled “From the Beginning.”  That’s that the clause in Article IV, Section 1 of the U.S. Constitution, that that only applied and thus would apply to the land that was ceded by the several states that I was mentioning earlier that would comprise and make up the Northwest Territory.  Let me repeat that.  That would mean that the territory power would thus be limited to, or was supposed to be limited to the Northwest Territory, which was territory covered under the Northwest Ordinance.  Mr. Hayward wrote this:

Interestingly, Congress never made any provision for any of this grazing land to become private even though two other significant groups were provided for: Namely, the miner and the farmer, who could gain title to their land by either registering their “claim” to the land with the General Land Office (later through the process provided for in the Homestead Act of 1862, which limited the size of homestead land to 160 acres) or the patent process of the Mining Act of 1872.

As a matter of fact, there’s a chapter in Times That Try Men’s Souls where George Washington writes a letter to Congress and says: Okay, you gave me a little authority here to try and keep the army together.  Here’s what I told them I’m going to give them.  If you’re an officer and you remain an officer and remain in for two years, we’ll give you 100 square acres of land.

In order to execute that, to bring it to fruition, think about this for a moment: How would the Confederation Congress have acquired land?  Read the Articles of Confederation.  There’s no way for them to acquire land.  How would they have acquired land.  The answer to the question is that the states would have had to cede it to them.  In other words, the states would have said: Okay, we had this army.  They fought for our independence.  We won.  Yay, us!  Now we’ve got to pay up.  We’ve gotta fork over the land.  Where’re we gonna get it?  Yeah, where’re we gonna get it?  Well, since much of the land west of where the United States was on the Eastern seaboard was claimed to be owned by several large states, mainly Virginia and Pennsylvania and New York, it was easily to see that we’ll just cede some of the land that we claim title to west of where we currently are.  That’s the land that Congress used to either sell and use the cash to pay the debt off, or that they “gave” to those officers as a fulfillment of the contract entered into by Washington and those same officers.

In other words, we know at least one of the purposes of the general government of the United States owning land was for, number one, the repayment of debt, and number two, to repay or make good on promises that were made to soldiers that fought for American independence.  These are not an issue.  We know those are two of the reasons why territory was acquired by session under the Confederation Congress, and then those same men that made up the Confederation Congress, many of them went to the Federal Convention of 1787.  They would have known that they still had debts.  They would have known that there were still land debts that were owed to many of the continental soldiers.  This is what Mr. Hayward is claiming in his book, that this is why the Territory Clause and the ability of Congress to acquire territory, that is why it was put into the Constitution in Article IV, Section 3.