Mandeville, LA – Exclusive Transcript – What it takes to be a constitutional expert today is to have gone to a law school on the East Coast, it’s as simple as that, and to have had some professor profess to teach the subject.  What they actually teach, if they teach at all, is they teach Supreme Court history.  It’s not really Constitution history; it’s Supreme Court history.  Constitution history is a fairly straightforward field of study.  If one were to undertake a field of exploration in constitutional matters, then you would start with my docudrama, Fame of Our Fathers, and you would first answer the question “Why?”  Read more in today’s transcript…

Mike:  What it takes to be a constitutional expert today is to have gone to a law school on the East Coast, it’s as simple as that, and to have had some professor profess to teach the subject.  What they actually teach, if they teach at all, is they teach Supreme Court history.  It’s not really Constitution history; it’s Supreme Court history.  Constitution history is a fairly straightforward field of study.  If one were to undertake a field of exploration in constitutional matters, then you would start with my docudrama, Fame of Our Fathers, and you would first answer the question “Why?”

I believe I am one of the few authors or amateur historians, or even professional historians, other than maybe Pauline Maier may have written about this in her book Ratification, that has endeavored to ask the question and try to answer why.  Why do you need a constitution?  We were at peace.  The 13 states were at peace.  They were living under the Articles of Confederation.  Yes, there was frustration.  Why a constitution?  The fact of the matter is that there was not a call for one.  This was an act of subterfuge.  If you’ve listened to my docudrama Fame of Our Fathers, you probably know this.  James Madison and Alexander Hamilton schemed and connived and ultimately they were able to convince the then Continental Congress, or Confederation Congress as it were, that, [mocking] “Hey, your Articles of Confederation are lacking.  We need some amendments.”

I’ll walk you through a quick history.  For all of you that like to study these things, pay attention.  I’m giving you real history here.  I’m not making it up like some people do.  I haven’t hired a ghost writer.  I’ve actually read this stuff.  The first attempt was this thing called the Annapolis Convention.  It happened in September of 1786.  AG, you’re from Annapolis, aren’t you, from the area?  Or Eric is from Annapolis?

Mike:  Is young Eric, our official screener of phone calls, is he from Annapolis?

AG:  Suburb of Baltimore, so in between.

Mike:  So around the same area.  There’s a bar.  What’s the name of the bar?  I actually found it.  As a matter of fact, there’s a plaque on the wall.  Maybe somebody who lives in Annapolis can refresh my memory.  I don’t have my notes from Fame of Our Fathers here with me.  There’s a bar where this thing called the Annapolis Convention was held.  All 13 states were invited to send representatives.  Only representatives from six states ultimately showed up.  Among them, Governor Edmund Randolph of Virginia, Alexander Hamilton.  James Madison showed up.  John Dickinson showed up.  He was representing Delaware at that time.  I’m trying to recall who else.  It wasn’t very well attended and did not accomplish the goal that Madison and Hamilton had cooked up, [mocking] “We need a new plan of government, man.  We need to ditch these Articles of Confederation.  We need to nationalize it so we can have big, powerful, industrial interests and bankers get in here.  We’ve got this whole continent here that we can loot.”  I don’t think that was Madison’s intention.  It was certainly Hamilton’s intention.

When the Annapolis Convention failed, they drafted a letter called “The Annapolis Statement,” they sent it to the Confederation Congress and they asked for it to be sent to all 13 colonies, or states then, former colonies which had claimed their rights as independent states.  What I’m telling you here also just confirms or disproves everything that Lincoln ever said about perpetual union.  The Annapolis Convention, how the Constitutional Convention, it just disproves this whole mythology that there already was a perpetual — really?  If it was so perpetual and was so cherished and held near and dear and everyone knew it, then why didn’t they show up at all these conventions to propose amendments?  Why did each individual state send delegates to the federal convention with strict orders on what they were to do?  Each one of these commissions were pretty explicit as saying, [mocking] “Okay, we think you guys may be up to something.  Don’t come back with anything other than amendments.”

Fame of Our Fathers tells this story.  Madison was not going to take no for an answer.  He knew if he could convince George Washington to go to anything called an amendment convention, he had an outside chance of proposing a new plan of government, which ultimately he did with his Virginia Plan.  He had to convince Washington first and Washington was having none of it.  I’ve read the correspondence, all of it, and Washington just kept saying, [mocking] “You know, guys, I’m pretty happy here in Mount Vernon.  Life is pretty good.”  Have you been to the Potomac River?  AG, have you ever been to Mount Vernon?

Mike:  It’s beautiful, isn’t it, when you stand out and look at the Potomac River from Washington’s backyard?

Mike:  It’s quite a view.  Would you want to leave there?  If I lived in that house, I’d never want to leave.  So Washington was telling Madison, [mocking] “Dude, leave me alone.  Just shut up.  Yeah, I hear you about your silly amendments.  Go make some amendments.  Get out of here.”  Then Madison kept working on Virginia Governor Edmund Randolph.  Then Randolph then started working on Washington.  Finally Washington caved in.  The only reason he caved in is because AG’s ancestral society, the Society of the Cincinnati was being formed, which had it not been for your cousin, you would be the next hereditary member of.  It was only after the Cincinnati had decided to have their first convention in Philadelphia and they had invited Washington.  Washington first told them no.  I don’t know if you know that story, Andrew, that Washington said, [mocking] “Nah, I can’t make your convention.  I appreciate the nomination.  You want me to be the president and all that, but I can’t make it.”

He changed his mind after a guy named David Roberts, who I want to say was a lieutenant.  He was in the Continental Army with Washington.  Roberts was writing letters to Washington saying, [mocking] “Dude, we’ve got a major problem with the former enlisted men.  The Continental Congress will not honor the war notes.  They’re having to sell them to pay their debts off at ten cents on the dollar, 15 cents on the dollar.  This is tragic.  Somebody has got to do something about it and you’re the only one that can get anything done on a continental scale.”  So Washington finally caved in and said, Okay, I’ll go.  That’s what I believe is the reason why.  So you have to ask the question why a constitution and what was the demand for it?  The fact of the matter is that there wasn’t a demand for it. 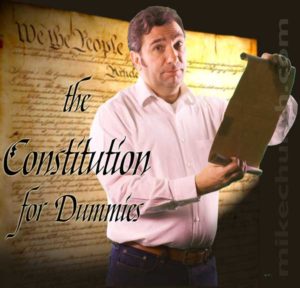 0Shares
articles of confederationConstitutionfame of our fathershistoryrandolphratificationsupreme courtwashington
Previous PostSolution To Big Government: Do What We Must Do, Not What We Should DoNext PostHow You Distance Yourself From Progressivism. What is Organize and Separate?