Mandeville, LA – Exclusive Audio and Transcript – Even if Romney and Ryan are elected, their plans are to run budget deficits about $800 billion short of the ones President Obama plans to run.  Who’s going to check them, Boehner?  What do you geniuses out there that propose it’s either Romney or all of us die, what do you propose to do about the trillions of dollars that he’s going to add to the deficit?  There is no end to this.  It’s almost as though there is an immunity towards the number trillion now.  I’m serious.  What is the plan to do anything about this?  As the president I think correctly says, “Governor Romney, your math doesn’t add up.”  If I were a conservative and I were you, I would demand that Governor Romney and Congressman Ryan show me the math.  I want to see the math.  I want you to show me how it is that you plan to address this. For the rest check out today’s audio and transcript…

Mike:  Will is in Arizona next.  How are you?

Caller Will:  I am doing good this morning, how about you, sir?

Caller Will:  It’s a pleasure to finally talk to you.  I always love listening to your show, a man with intelligence.  I like to see that.  You’re exactly right and I do believe this is the most important election for people in a long time, and not because of the two yahoos that are running for the presidency.  It’s because we need to take the House and the Senate, that way we could actually get control back and pull them by their ears kicking and screaming to do the right think if need be.  I believe the decepticons have put out an image that the big business, the big venture capitalists are free market people.  Well, they are not.  They hate the free market.  You were right about that train already leaving the station earlier.  Our choice is to get back control of the House and Senate, to put the system back into a check and balance.  I believe that’s our only hope.

Mike:  Even if Romney and Ryan are elected, their plans are to run budget deficits about $800 billion short of the ones President Obama plans to run.  Who’s going to check them, Boehner?  What do you geniuses out there that propose it’s either Romney or all of us die, what do you propose to do about the trillions of dollars that he’s going to add to the deficit?  There is no end to this.  It’s almost as though there is an immunity towards the number trillion now.  I’m serious.  What is the plan to do anything about this?  As the president I think correctly says, “Governor Romney, your math doesn’t add up.”  If I were a conservative and I were you, I would demand that Governor Romney and Congressman Ryan show me the math.  I want to see the math.  I want you to show me how it is that you plan to address this.  Let’s just assume that they win the election.  Does that mean that all of a sudden the Tea Parties all go away or they just have meetings once a month to get together and have a spaghetti dinner because they’re so confident that John Boehner and Eric Cantor are going to be managing their fiscal affairs and get the budget and debt and deficit in order?  That’s crazy talk.

Caller Will:  I agree with you.

Mike:  Here’s the point: you better be as vigilant against your guy as you are against Obama.  This fantasy that all of a sudden everything is hunky-dory with the planet and with the world and with our finances on November the 7th if Obama is turned out of office, that is dangerous.  Is that a conservative thing to say?  You’re $16 trillion in the hole.  You have promises from the guy that’s going to assume office on January 20th that that number is going to go north of 20 at the end of his first term and you don’t have a problem with that?  Really?  Seriously?

Caller Will:  That is where America was founded upon.  That’s what would save America once again.

Mike:  Will, thank you very much.  There have been two episodes here that make what you just said impossible.  The first were the efforts to defeat nullification in 1832 and the second was the signing of that ceasefire at Appomattox in 1865.  The states, on that date, ceased to exist as insular, sovereign entities.  That is the original sin of the problem.  You’re not going to fix that, then look for budget deficits and tyranny to reign over yours and your kids’ heads from now forevermore.  There is no light at the end of that tunnel.

The only way that I know of to reverse that process is to get about the business of repealing what has happened since.  Some say it’s a long, laborious process and it’s going to take as long as it took to screw this up as it is to fix it.  That’s like saying your life is not worth living and that you’re conscripting yourself and your spouse and I guess your children to live in a God-awful, intolerable set of conditions, governmentally speaking.  Really?  Seriously?  It’s going to take a century to reverse this?  We don’t have a century.  I don’t want to wait a century.  That ought to happen tomorrow.  This isn’t as though there is some spirit that has to be conjured up from the bottom of some Egyptian tomb.  This is pretty simple.  Most of it is mathematics.  “You only took in $2.2 trillion.”  “Yeah, but we’re gonna spend.”  “No, you can only spend what you took in.”  That’s the way it’s got to be.  It takes 70 decades of brainwashing to get people together to come to that conclusion?  You really seriously believe that?

By the way — and I seem to be the only person that has the courage to bring this up as well — the Republican repeal and replace plan is nearly as bad as ObamaCare.  Please explain to me and to other “constitutionalists” — remember the first hour of the show I read the letter from Richard Viguerie, the alleged conservative leader who seems to me to be more of a decepticon, that constitutionalists and libertarians needed to vote for Romney to get rid of Obama, because we’re going to restore the Constitution with Romney.  Okay, Mr. Viguerie and the rest of you, please explain to me in what clause of the fabled Constitution that is dead, es mortis, Latin for it is dead — what clause of the Constitution do you find the authority granted to Congress to force an insurance company to purchase health insurance for an individual?  That’s what the preexisting mandate is.

Let me see if I understand this, the Roberts Court erred and the Constitution says you can’t make me buy health insurance, but the same Constitution in the same Roberts Court ought to be called upon to make Aetna, Cigna, or Blue Cross buy a health insurance policy for someone their own rules, regulations and responsibility to their shareholders says they will not write a policy for.  You’re forcing them to buy health insurance.  What clause says that?  If you can tell me what clause, I’m going to tell you back that ObamaCare is perfectly legal, shut up.  [mocking] “Yeah, but Mike, Obama is evil.”  But the preexisting condition mandate isn’t?  It’s still a mandate.  It’s still going to drive costs through the freaking roof.  You people that are doctors out there, that work in the insurance industry, you know exactly what I’m talking about.  Yeah, but it’s not from Obama.  Oh, okay, I get it.  So at some level Chrissy hissy-fit Matthews is at least partially correct. 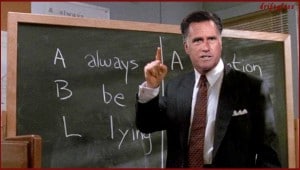 Also, we Tea Partiers WILL NOT go away. If anything, we’ll be busier than ever. We will have to work alongside Mitt Romney to repair the mess obama has left. We will work hard to promote conservatism, balancing our budget, cutting taxes, growing our economy, creating jobs, strengthening our military, and perhaps most importantly, restoring American morale by making people proud to be Americans while making sure that America is respected at home and abroad.

I’m not a big fan of John Boehner or Eric Cantor. I hope that we can replace these liberal Republicans with true conservative candidates in the next election cycle. They’re also part of the problem with their “go along to get along” attitude. I’m also hoping that John McCain will retire and decide not to run in 2014 in my state of Arizona but if not, then I hope that we can get an all out effort to replace him anyway.

Just a little excerpt of what to expect, assuming that Mitt Romney is elected President, God willing.

So this comes down to keeping a scorecard of criticism, Alex?
Are you a Lincoln-loving nationalist? Sounds like it. Who is “we”? You are delusional in thinking that any one person, President or national government of these United States has the authority to grow economies, create jobs, restoring or doing anything else to or for morale. What do you mean “making people proud”? Force? Being proud of one’s government is not necessary for happiness. Who cares if our government is respected here or anywhere? I do not respect it and any alleged “conservative” cannot respect this government.
Do the ends justify the means, Alex? Does it not matter what your candidates says, does or promises nor how contrary to [r]epublican and Constitutional principles that is as long as they win? You, sir are the sad face of a sham and corrupted movement that had humble and patriotic roots.

So, Mike, you’re agreeing with obama once again by saying that the math doesn’t add up in Romney’s plan? So sad…

Honestly, who are you going to believe? Are we to believe a man who ran a business for decades, has the business know-how and experience, fixed the Salt Lake City Olympics, successfully balanced the budget in Massachusetts every year, and left a budget surplus for his state at the end of his first term? Or are we to believe some community organizer who has NEVER worked in the private sector and doesn’t know the meaning of hard work since everything has been handed to him.

If Mitt Romney says that his plan of cutting taxes for everyone (20% across the board tax cuts), cutting spending, auditing the Federal Reserve to eliminate useless government programs, and removing economic and environmental regulations will work to jump start our economy again, then I believe him. Why you say? BECAUSE HE’S A BUSINESS MAN! HE KNOWS THESE THINGS! We have tried this approach before and low and behold these “crazy ideas” worked. Think 1980s and 1990s.

Mike, seriously, you have been way more critical of Mitt Romney than you have of obama. If you don’t want your listener ratings to keep dropping, then stop with your progressive obama/ron paul/gary johnson ideas and this “blame America first” nonsense. I’d suggest you listen to Mark Levin, Rush Limbaugh, Sean Hannity, Glenn Beck, or even Michael Savage and watch some good quality TV news shows like America Live w/Megyn Kelly, Fox Report w/Bret Baier, or On the Record w/ Greta Van Susteren and take careful notes so you can learn more about conservatism and the issues affecting us. Maybe then you’ll see the light.