Mandeville, LA – Exclusive Transcript – Let’s go all the way back to 1787 and let’s figure out why there was a Senate to start with.  To answer that question is to shed some light on the way things are supposed to work in the American constitutional system, which, by the time I’m finished with this, it’s not the way I’m going to tell you they work because they don’t work like that any longer.  Check out today’s transcript for the rest…

Mike:  I asked Dr. Professor Kevin Gutzman to be on the program today.  He couldn’t make it today.  He posted on his Facebook page that minority tyranny was no better than majority tyranny, and that it was about time this silly, arcane rule bit the dust.  That set me off last night.  I stayed up about an extra hour and a half reading up on this.  I’ve got some great stuff to add to this, historically speaking.  I just wanted to set the table with the majority of the House versus the majority of the Senate.  Each ought to be as equally dignified and as equally viable and important.  No longer should we hear anything about a reckless majority in the House of Representin’ doing [insert your favorite act of Congress.]

Let’s go all the way back to 1787 and let’s figure out why there was a Senate to start with.  To answer that question is to shed some light on the way things are supposed to work in the American constitutional system, which, by the time I’m finished with this, it’s not the way I’m going to tell you they work because they don’t work like that any longer.

In the Federal Convention, you had little states represented as equally, because they each had a vote — you voted by state, not by individual.  There are 57 delegates to the convention, I think, at the high water mark.  Probably they ended with 40 or 41.  The votes went down by state.  You might have someone there from Delaware who had as much power in the votes on what was going to be in the Constitution as someone from Virginia, which was the largest state, Delaware being the smallest because Rhode Island was not represented.  They didn’t send a delegation.

In the debates over how to form the bicameral legislature, there was a dichotomy of views, meaning there were a couple different views on this.  One of the views was the Senate ought to be popularly elected and come from representative districts just like the House.  The representative district would be the state.  The State of Virginia, if they did it by population, might have had four senators, and each state, meaning a state like Maryland or New Hampshire or Delaware, the bare minimum you would get would be two.  Still, if you did it by population, you’d have Pennsylvania and New York and Massachusetts with a lot more senators.  The theory was that if you allowed the larger states to have senatorial representation by population, they would deny the wishes of the little states.  The only thing the little states could do would be to band together with other little states and try to make a deal with one big state to thwart the will of the other states or one big state leading a coalition of sorts.

The theory was then concocted by Roger Sherman, actually it was Ben Franklin and Sherman then took it to the floor, that maybe we should equally divide it kind of like we’re equally dividing it right now.  In other words, each state will just get two senators.  That way there’s no apportionment and that way there’s no need to count populations, and that way each state is equally represented.  If you’re going to do that, that means the political wishes of each individual state were supposed to be part of the federal government, were supposed to be part of the sausage making, as Everett Dirksen once called making legislation inside Mordor on the Potomac River the sausage-making process.  You would have equal representation in the Senate, but the Senate would not be chosen by popular vote.  Instead it would be chosen by what?  Each legislature would appoint their own senators, and those senators would serve the wishes of that particular state assembly.  Whether it was a legislature, an assembly, whatever it was called, it would report directly to the men that were elected by the people to represent the people in their own state.

This is an important distinction to make here.  Viewing the federal government through that lens, you can say then that the states were at least equal partners.  Since congressional districts are divided up and apportioned among the states, you could actually make the case, and this should be the case, that the states were unequal partners, that they had more authority than the general legislature would.  Number one, they chose the Senate.  Number two, the electors that were elected inside of each state chose the president.  Number three, the representation was apportioned and divided up inside the states to make certain that the individual wishes of and the local concerns of different areas of each state were adequately represented.  The states actually had a stronger controlling interest in the entire endeavor than did the newly-created general government.

With what happened yesterday, you had a restoration of the way business used to be done in the Senate.  It wasn’t until the Senate was a very old institution that the idea was concocted that we needed to have a minority check on the abuses of the majority.  This was after the 17th Amendment was implemented.  What can we conclude from all this talk about the nuclear option and what have you?  We can conclude now that we may as well just have voting by internet on any issue or item of import.  Why even bother to send representatives to Mordor is my question.  You have 50 percent of the population plus one in the House, 50 percent of the population plus one in the Senate.  The only countervailing measure you have is a responsible president, and we certainly don’t have one of those, who can exercise this thing called a veto pen.

How long until these guys get around to undoing the ability to override a veto?  A two-thirds vote in each house, that’s a pretty high threshold to cross.  Doesn’t that thwart the will of the majority?  What if you have an out-of-control president who’s doing things that are not in keeping with the wishes of the people?  Shouldn’t the House and Senate, since they’re now both majority-controlled institutions, and the state governments don’t have a say-so or role in this, shouldn’t they just be able to override the wishes of the president?  Let’s make it easier, 50 percent of the population of either of the houses plus three votes.  How about that?  We’ll have a 53 vote threshold in the Senate and we’ll give you three times that amount in the House, so you’ll need 225.

Wouldn’t it just be easier to save all of the time and the agony and the money and the expense of maintaining both houses of Congress if we just convened internet voting on every particular issue of every kind that is formally being debated in both houses?  After all, as long as we show up and vote in our internet voting booths, we can get majorities, can’t we?  There’s nothing that says this thing has to be apportioned by state anymore, does it?  I think that’s the great tragedy of the entire debacle now.  You can say a minority can no longer tyrannize a majority in the Senate and that’s a good thing.  Fine, but now you have removed any influence that the individual states had, not that they had much to start with, but you’ve now eliminated any influence the states had over the process.  Now we don’t have any federalism.  There’s no federalism left, zero point zero.  That, my friends, is not a positive development.

For those of you that protested mightily about the Constitution not being dead, what say you now?  Not only is it dead, it’s buried.  We should do the honorable thing, I think.  One of you guys out there that’s a woodworker, you should put pencil to paper and then chisel to freshly-hewn wood and fashion us a really, really nice coffin to put some facsimile of the original Constitution in and we’ll have a ceremony and bury it.  That’s the honorable thing to do. 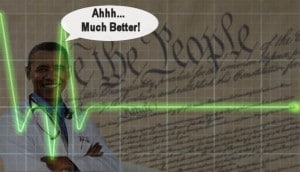